‘How can I tell her that there is no more home?’ After leaving Ukraine, refugees face a bureaucratic nightmare 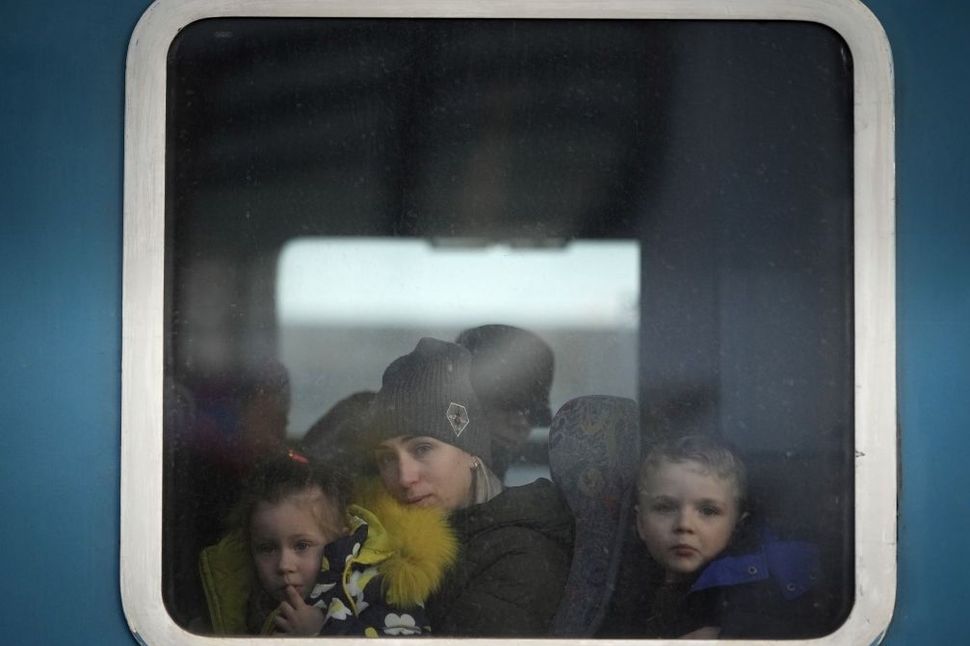 Refugees fleeing Ukraine arrive at the border train station of Zahony on March 08, 2022 in Zahony, Hungary. By Christopher Furlong/Getty Images

I decided to take the kids on a trip to cheer them up.

A volunteer from Romania drove us to a local mall in Slovakia. These Ukrainian children will be starting school in Slovakia soon, and I wanted them to feel a little bit normal and excited by new clothes, backpacks and school supplies. I know how important it will be for them to feel confident and make new friends — and to have more than just the clothing they each wore for 48 hours straight while running for their lives.

One little girl was really upset; her father, like most Ukrainian men, had stayed behind to fight.

I saw her eyeing a blue sweater, and I asked if I could buy it for her. “It will look so beautiful with your eyes!” I said. “A nice, new sweater for school.”

She looked at me and shook her head. “I have everything I need at home,” she replied. “I don’t need it.”

My heart broke. How can I tell her that there is no more home?

I’ve lived in the United States since 2005, but my mother, sister and brother live in a small Ukrainian village that Russian forces have been heavily bombarding since the war began. In the first week of the war, my sister Zhenya ran to the bomb shelter 44 times.

A screenshot of the Odesa siren app from the first days of the war, before the author evacuated her family. It reads: “ATTENTION!!! AIR RAID!!! THERE IS A GREAT PROBABILITY OF A ROCKET ATTACK ON THE ODESSA REGION. PROCEED TO SHELTER.” Courtesy of Alexandra Gizhitsa-Anderson

On the night that the Zaporizhia nuclear power station was bombed, my 12-year-old brother Misha had snuck upstairs to play a videogame; a bomb fell on their street and blew out all of the windows. Misha was paralyzed with fear. Zhenya didn’t want to leave at first and wanted to join the army, but seeing that she couldn’t get Misha to stop crying, she and my mother knew it was time to leave Ukraine.

After many sleepless nights here in safety, I knew I had to do something. I began organizing with local Ukrainians to evacuate families. My Chabad rabbi was on the phone frequently with Ukrainian rabbis, directing money first to evacuating the Tikva orphanage in Odesa.

As the network then got bigger, we began evacuating people from southern Ukraine. I landed in Slovakia on March 5, and by March 7, I was driving to the border. I wanted to meet the first group, which included my family, in person.

As we approached the border, the Slovakian border patrol told us the main border entrance was totally full, with a wait of over 60 hours for refugees to pass through.

Everyone on our first bus was in a rush, and we didn’t want them to wait; they were packed like sardines in buses already, so we told them to go to a different crossing. Our Romanian driver Adrian and I drove through wooded suburbs, which then became a deep forest, at 2 a.m. We saw lights, and both NATO and Slovakian troops, so we knew we were in the right place. From L-R: the author’s mother Irina, sister Zhenya, and brother Misha, along with Monya, one of the two family dogs who all made it to safety. The family is posing at the Slovakian border after they’ve successfully crossed out of Ukraine, March 7, 2022. Courtesy of Alexandra Gizhitsa-Anderson

The military was initially very brusque and demanded to know what we were doing there. Once we explained, then they quickly welcomed us, and told us to drive to the barricades and take a right towards a clearing. When I saw my family in this makeshift pickup reception point, I felt ecstatic. Even the family dogs, Monya and Zhasya, made it to safety.

Slovakian officials have been such a joy to work with, and I was able to place 40 Ukrainian families in homes. Romania and Moldova are primarily working with Chabad and United Hatzalah to help place the hardest refugee cases: seniors, disabled persons, sick people and orphans. Of the 5 million Ukrainians who have fled, three-quarters of them are in Poland, so it is getting very difficult to place families there.

I lived through post-Soviet poverty as a child, but this war is different. As I was helping to find housing for families in Slovakia, I heard adults crying every 15 minutes for different reasons: they hadn’t locked up their business before fleeing, they had elderly family members stranded in a basement, they didn’t know who would take care of their volunteer shift at an animal shelter. 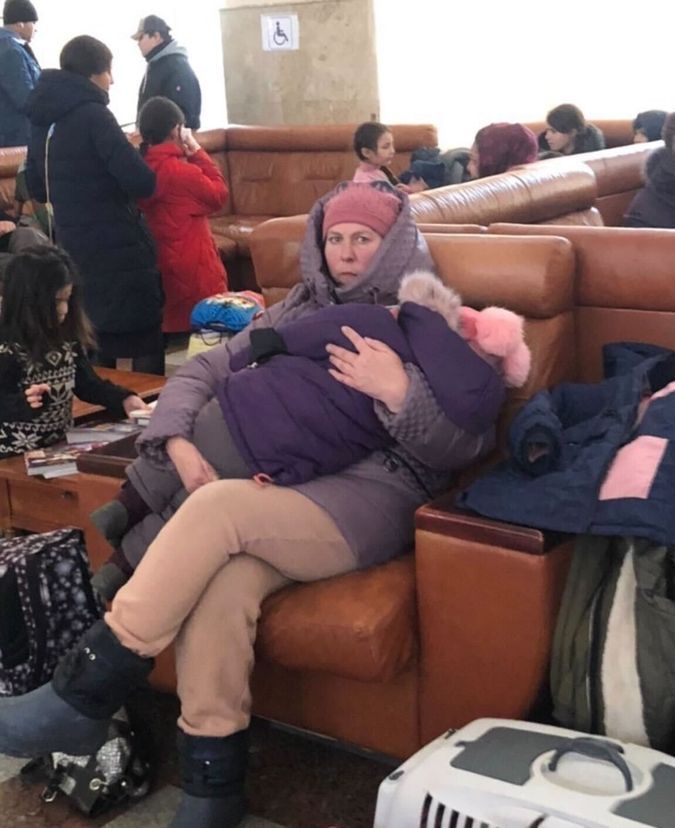 A neighbor of the author’s family, Tatyana, waits with her daughter to be evacuated. Her house was directly bombed. Courtesy of Alexandra Gizhitsa-Anderson

There are so many people that want to help and so many different ways to do so. In particular, Israel’s field hospital and humanitarian efforts are unbelievable; there is no stopping them.

Unfortunately, the Red Cross has been terrible to work with.

A friend was in Odesa with a bus of seniors who were trying to evacuate through a humanitarian corridor. In normal times, these seniors are under constant medical supervision, so a war is particularly scary for them.

The passengers needed medication and a medical evaluation to make sure that they would survive a six or seven-hour drive to Moldova without having a stroke or other medical emergency.

My friend saw a Red Cross team and asked them if they could have a medic check the passengers, or even better, accompany them. The responses were mired in bureaucracy: “email this person, you’ll need to get confirmation from this person.” But the curfew in Odesa started in less than two hours, and these seniors needed to get out now before the bullets started flying again. 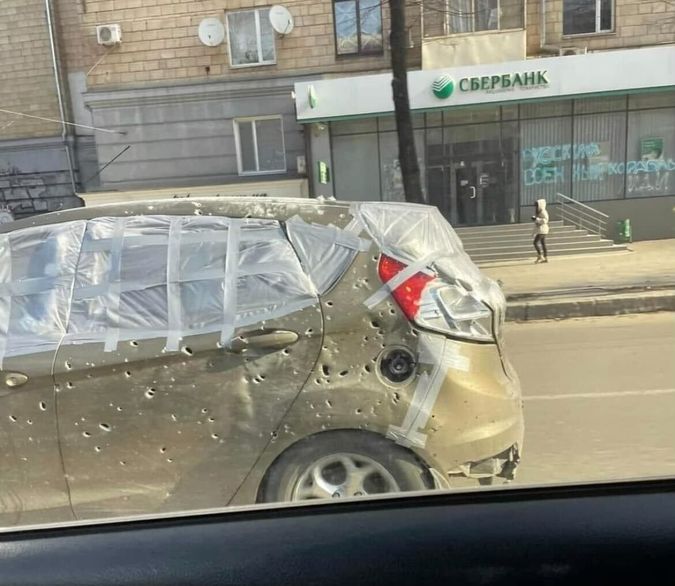 A vehicle that successfully made it through a “green” humanitarian corridor, yet still endured heavy fire from the Russian military. Courtesy of Alexandra Gizhitsa-Anderson

There wasn’t time to wait for that bureaucratic nightmare. I felt like my heart stopped for six hours until I got word that the bus had made it safely to the Moldovan border.

There is a high level of cumulative frustration and anger. Volunteers and everyday citizens, some of whom do not even have family in Ukraine, are trying to help save people and are met with a bureaucratic mess.

But there are so many who are helping: one group is running an initiative to get bulletproof vests for drivers. A Family Travel Concierge in Connecticut is running logistics and procurement for a coalition of Jewish doctors in New Jersey, Connecticut, Germany, Israel and Kyiv, who have made five trips (and counting) to deliver medical equipment directly to Kyiv Hospital No. 8, working directly with Ukrainian hospital officials.

In Bratislava, we filed for family reunification. I am hopeful that since President Biden recently signed a new law, my mother, sister and brother will be able to join me and my family in the United States soon. 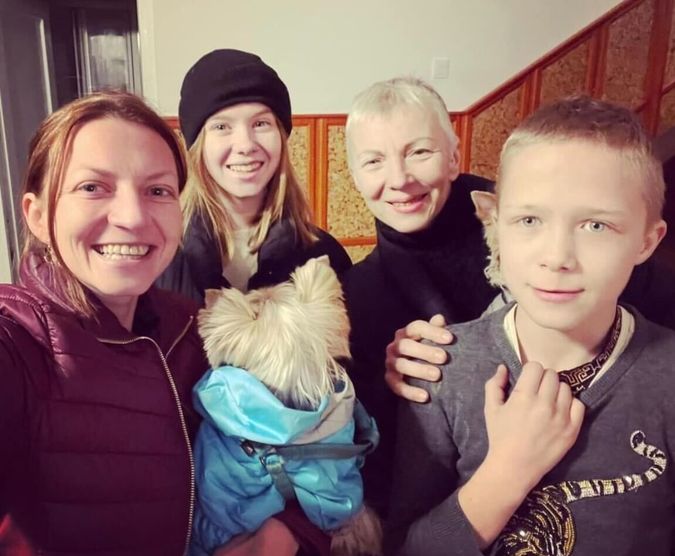 The author (L) in a purple coat, reunited with her family in safety in Slovakia, March 2022. Courtesy of Alexandra Gizhitsa-Anderson

Alexandra Gizhitsa-Anderson is a Jewish-Ukrainian immigrant living in Connecticut with her husband and two daughters. She has built a successful career in marketing operations for technology companies, and her passions include advocating for humanitarian causes and civil liberties.

‘How can I tell her that there is no more home?’ After leaving Ukraine, refugees face a bureaucratic nightmare