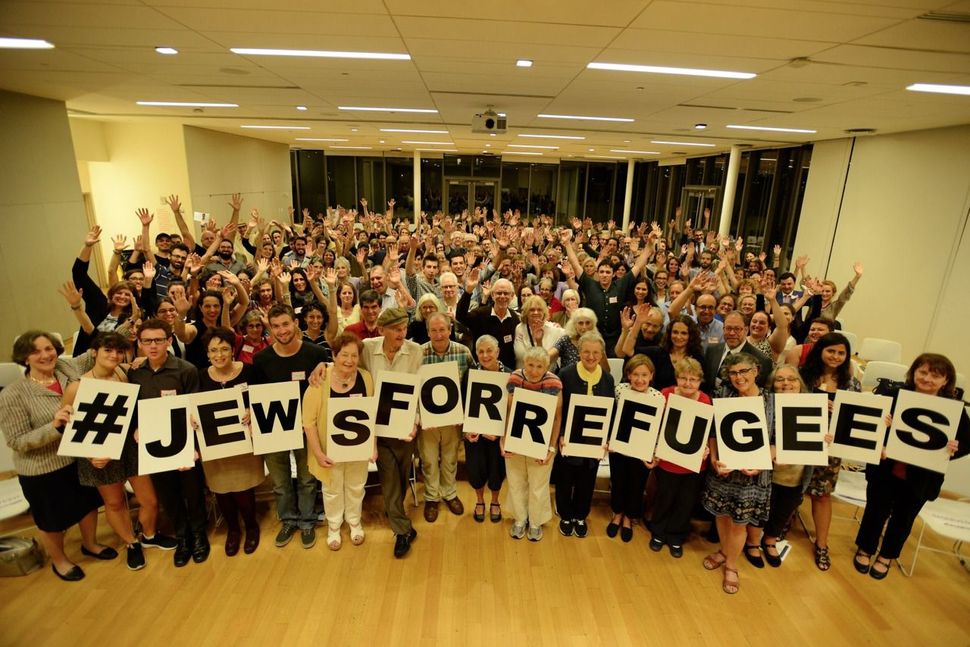 In her recent piece, “Our Great Moral Failure in Syria,” Forward Editor-in-Chief Jane Eisner calls attention to the American Jewish community for “inexcusably turning our backs on those in need” in Syria.

Like Eisner, we are all grappling with the unconscionable amount of death, suffering and displacement we’ve witnessed in Syria over the past few years, and pondering if we could have done more to act to prevent the tragedies that transpired. This year tested us in ways we never imagined possible, but it has also spurred the Jewish community to respond to the Syrian refugee crisis in an unprecedented fashion.

By the end of 2016, together with our local refugee resettlement partners across the country, the Jewish community will have resettled more than 4,500 refugees from around the world, including nearly 1,000 from the brutal civil war in Syria. These are more than just numbers. Each refugee resettled here means one more person, one more family, who has escaped the violence and been offered the chance to rebuild their lives. Moreover, in leading the American Jewish response to the global refugee crisis, we at HIAS are inspired by a growing constituency of people who are going to great lengths to “welcome the stranger” on a daily basis. Over the past two years, as I have spoken in dozens of synagogues across the country, I have been moved by the number of Jews determined to take action on behalf refugees.

Jews are supporting refugees in their local communities through English tutoring, finding housing and furnishings, offering job mentoring, childcare and a myriad types of day-to-day support needed to successfully begin a new life in America. Jews are also calling on their members of congress, mayors, and governors to stand up for refugees. Within 48 hours of the governor of Texas announcing in September that the state would no longer resettle refugees, 70 rabbis had taken a stand by defending Texas’ tradition of resettling refugees and urging the governor to reconsider. In fact, more than 1,000 rabbis across the country have called on elected officials to exercise moral leadership in assisting the world’s refugees.

Last week leaders from more than 20 synagogues in the Greater Washington D.C. area came together to learn how their congregations could commit to welcoming and supporting refugee families – raising resources and organizing people power. Across the country, congregations are co-sponsoring individual refugee families, and nearly 250 synagogues have joined a campaign to actively create communities of welcome in their towns and cities.

Have these efforts been sufficient? Absolutely not. Moving forward into a very uncertain political climate, it is up to all of us to ensure that the United States remains both a global leader in humanitarian aid and a place where families fleeing war and persecution can find safety and dignity. Now, more than ever, the American Jewish community must call on our country’s elected officials to ensure that vulnerable populations of all ethnic and religious backgrounds are offered refuge in time of need.

We must not lose sight of our failures, for as Eisner so compellingly lays out, they are very real. But let us not take familiar comfort in our guilt. Rather, let these failures compel us to act with greater purpose now. Call your elected officials, and ask your rabbi to sign the National Rabbinic Letter in Support of Refugees which will be delivered to our new leadership in the lead-up to inauguration.

Let this moment of reckoning lead not us only to guilt, but to an increased motivation to act. Jewish tradition teaches us that teshuva (repentance)is measured by whether, ultimately, presented with the same situation, we will act differently. That is the moment we now face.

Rabbi Jennie Rosenn is the Vice President of Community Engagement at HIAS, the global Jewish nonprofit that protects refugees.