No, Chabad is not ‘feuding’ with Jewish leaders in Poland 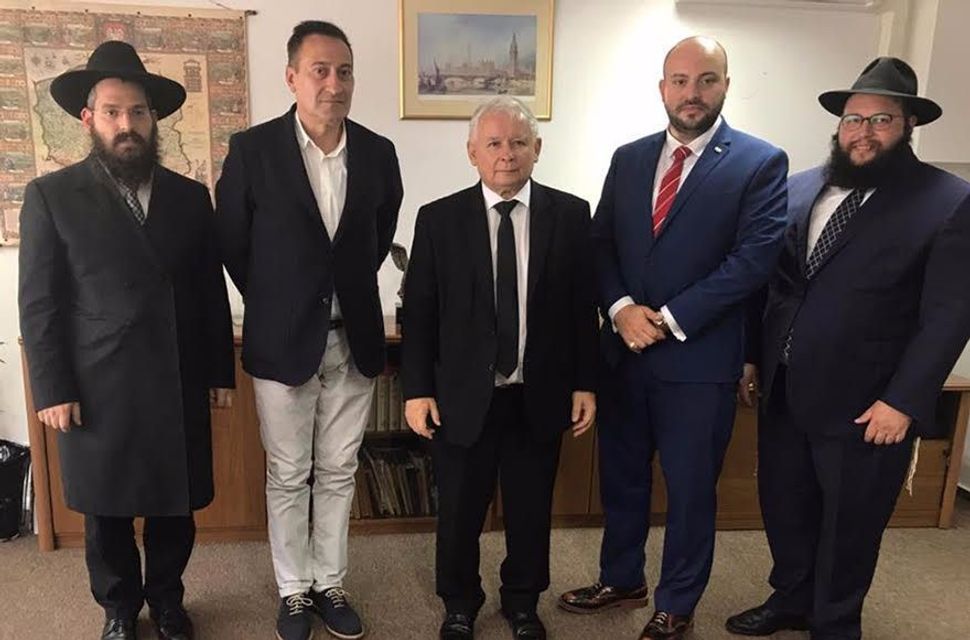 A recent article in the Forward claimed that by accepting an invitation to a meeting with Jaroslaw Kaczynski, the leader of Poland’s ruling conservative party, Chabad is “feuding” with Jewish organizations. This is not true. Chabad violated no understanding, explicit or implicit, nor any relationship with the other Jewish representatives by taking this meeting. In fact, it was our duty to the Jewish community to attend this meeting. Here’s why:

As was reported in the article, in July, representatives of two of Poland’s Jewish organizations — Mr. Leslaw Piszewski and Ms. Anna Chipczynska — published an open letter to Mr. Kaczynski about their fears of rising anti-Semitism.

Their letter went unanswered. But several weeks later, we at Chabad, along with other Jewish representatives, were invited to meet with Mr. Kaczynski.

This is not uncommon. Chabad — as other Jewish organizations — often meets with government representatives of their respective Jewish communities; and the invitation we received made no reference to the letter sent by the two community representatives.

We understand that it is upsetting to Mr. Piszewski and Ms. Chipczynska that they received no response to their letter. But the indignance at our meeting with Mr. Kaczynski as expressed in this article is ironic in the extreme and reveals a double standard when it comes to Chabad.

This the authors of The Forward article interpret as “virtually a declaration of full autonomy.”

Really? “Autonomy” from whom? As if until now Chabad was in a dependent relationship with Mr. Piczewski or the organization he leads!

The writers of the public letter presumptuously purport to speak for all of Poland’s Jews, and yet at no point was Chabad of Poland, as one of this country’s representative Jewish organizations, consulted or notified about the letter. Indeed, had we been consulted about the letter, we would have suggested a less confrontational, more effective approach in seeking Mr. Kacyzcinski’s intervention.

But the irony goes even further. The article states that “mainstream Jewish groups are increasingly worried that Chabad… is allying itself with authoritarian governments.”

Certainly, they would not have refused to meet with Mr. Kaczynski had they been invited. How ironic then is their “alarm” at the imagined alliances between the government and Chabad of Poland, which, unlike the other Jewish organizations, has never benefited from any funds or the restoration of Jewish property by this or previous Polish governments.

The article also quotes Konstantyn Gebert, a prominent Jewish journalist in Poland as accusing Chabad of “an act of disloyalty to the existing Jewish community” by accepting the invitation. But in fact, in an August 23 interview on Polish television, when asked if he thought Chabad’s meeting with Kaczynski was inappropriate, Mr. Piszweski said, “No. We do not we have any problem with Chabad-Lubavitch meeting with Mr. Kaczynski.”

Apparently, Mr. Piszewski recognized that it would be ludicrous for him to make such an accusation in public. He knows, as Mr. Gebert surely must, that no benefit would have accrued to the Jewish community by refusing the invitation to meet with Poland’s leader.

Indeed, to do so would have been a betrayal of our responsibility to our community and a disservice to Polish Jewry at large.

It is a pity that the writers of this article did not bother to visit Chabad’s centers in Warsaw and Cracow and meet with any of the hundreds of Jews who participated in Chabad’s High Holiday and Sukkot programs and services. Had they done so, they may have been more careful about making outlandish claims of “mainstream” Jews in Poland now beset by “worry” at Chabad’s meeting with Mr. Kaczynski.

Instead of appreciating the opportunity the meeting offered the Jewish community to have its concerns addressed, the article inflames petty grievances unbecoming of Poland’s Jewish leaders and paints a terribly misleading portrait of hostility within the Jewish community.

Contrary to your provocative title, Chabad most certainly is not “feuding” with Jewish leaders. Notwithstanding the disagreements between us on a number of issues, we maintain cordial relations with all the organized Jewish communities of Poland.

No, Chabad is not ‘feuding’ with Jewish leaders in Poland