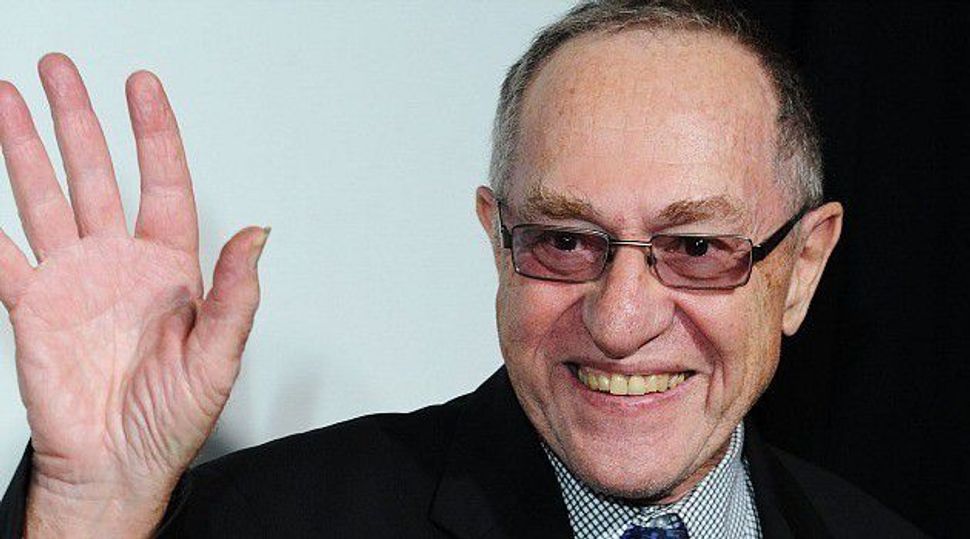 It’s not every day I get to wake up and find that a world-famous lawyer fifty-one years my senior has called me a Nazi propagandist-cum-McCarthyist-and-cringing-Jew. Most people would struggle embracing so many contradictory ideologies, but me? I’m a striver.

I appreciate the scrutiny, to be honest; it’s flattering. I mentioned your name once in the seventh paragraph of my op-ed, but as a fact-checker, I appreciate your careful attention to even the minutest details.

I have so much to say to you, but my editor at this beloved publication (a timeless vehicle for intellectual score-settling among Jews) has asked me to provide a rebuttal with some substance. So, to the substance of your criticism:

You accuse me of saying that Jews are second-class citizens, of advocating for a fearful state of mind, and what’s more, stating that as a result, I wish to shut down the freedom of Jews to embrace whatever political ideology they wish. My dear Mr. Dershowitz, I have to tell you, I find it perplexing (although again -—flattering) that you think I invented the concept of diaspora Jewish identity, that I alone am responsible for the tremulous echo of anti-Semitic persecution that shivers along our spines.

Allow me to reassure you, I have no interest in censoring the political views of your average Josh in Teaneck, Lawrence, or LA. I do, however, feel I have some material investment in those coreligionists of mine who associate with and defend the president on the national stage.

It’s not that I long for a world of Jewish self-censorship; I, like you, wish that we could live in a world in which we were not scrutinized so closely. I, too, long to be free of the accusation that we are orchestrating conspiracies, whether it’s the Zionist warmongering the left accuses us of, or the white genocide the right lives in fear of.

But that is not the world in which I live.

And so I keep my eyes open, I thrash with inherited anxious insomnia, and I bite my lip when a Greitens or a Broidy makes the news. I happen to believe that closely associating oneself with this administration is not a path to covering oneself in glory. (The shattered careers and public humiliations of any number of Trump associates, a year and change into his presidency, would tend to back my thesis.)

Forgive me. I am not the architect of this neurosis, merely its inheritor.

Your category error is understandable; it’s quite similar to the one you accuse me of making — to wit, confusing you for a defender of Trump, when you are, in your own words, a defender of civil liberties.

I suppose I confused you for a defender of Trump because you go on his favorite TV channel multiple times every single week and defend him.

But you voted for Hillary Clinton! Please enlighten me about how you scored a dinner invitation to Mar-a-Lago subsequently -– and why I should ignore that. I’ve never been invited, but I hear the Wednesday seafood nights are exquisite.

You’re a principled civil libertarian, you tell me, on par with the ACLU. Naturally, I take you at your word. I suppose my own definition of defending civil liberties usually involves sticking up for the powerless. But you might answer that the President of the United States also might need defending, and indeed, I am wont to concede this point; though he holds control over a bloated nuclear arsenal, is the commander of the world’s largest military, and is ferried everywhere in giant fleets of black SUVs, he clearly does lack some powers (self-control, empathy).

I wonder, though, if your commitment to civil liberties extends beyond the Oval Office, as you so virtuously claim. I would argue that you have overlooked some of the most marginalized among us in your unceasing quest for a certain kind of justice. In your latter career as a defender of Israel, you have repeatedly stoked the flames of Islamophobia in America. In 2008, for example, you called the slaying of Robert F. Kennedy “the beginning of Islamic terror in America.” Given your reputation for hard-charging examination of the facts, I wonder how it escaped your scrutiny that Sirhan Sirhan was in fact Christian.

And in 1991, you took to the New York Times and bemoaned the fact that “feminists” demanded “special treatment” for rape victims – to wit, the fact that rape victims are generally not named in the press. Surely a sophisticated advocate such as yourself is aware of the unique nature of smears against rape victims; perhaps they are, to your mind, not worthy of the liberty of living their lives without slander.

Mr. Dershowitz, I never claimed to have the power to “define what it means to be an American or a Jew.” On the other hand, I have not publicly, visibly allied myself with a president who has demonized another religious minority – Muslims – and hounded immigrants to this country unrelentingly.

As a daughter of immigrants who arrived here in the wake of unthinkable trauma, I view these tactics as menacingly familiar – and support of them short-sighted, particularly in the long, long view of Jewish history. I do not view a few decades of American prosperity, shot through nonetheless with anti-Semitism of both the genteel and violent varieties, as enough to elide all the lessons of that history.

It seems to me unfortunate, my august interlocutor, that you do.