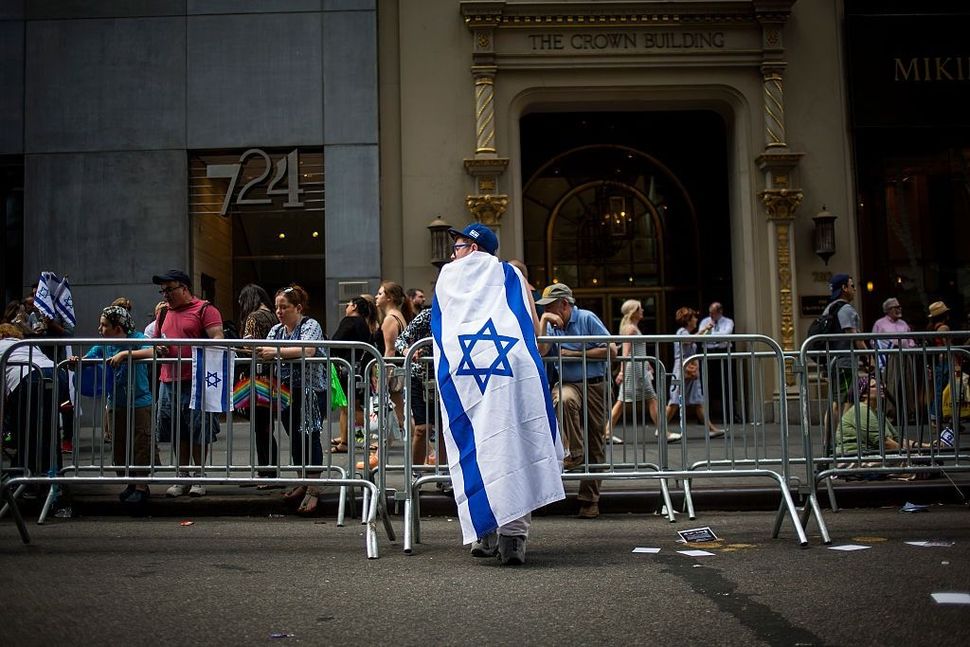 People take part in the Celebrate Israel Parade along Fifth Avenue on May 31, 2015 in New York City. (Photo by Eric Thayer/Getty Images) Image by Getty Images

In their response to my recent piece, “The Loneliness of the Liberal Zionist,” Harry Reis and Yoav Schaefer have argued that Israel bears responsibility for the decline (if not death) of liberal Zionism as a viable future path for the Jewish state. Because of five decades of occupation, unremitting settlement expansion beyond the Green Line, the siege of Gaza and the “rightward jolt of the Israeli political landscape,” liberal Zionism has been rendered little more than a utopian dream among Jewish intellectuals in the American diaspora. My piece, they argue, fails to take this into account, that I am either being disingenuous or I am oblivious to the failure of liberal Zionism in Israel’s hyper-nationalistic political arena today.

Leaving aside the fact that Reis and Schaefer fail to apportion any blame to the Palestinians for the failure of peace, I do not disagree with much of what they write. I am well aware that “facts on the ground cast a giant shadow over the possibility of achieving liberal Zionism’s vision.” But Reis and Schaefer have missed the central point of what I have written: that liberal American Jews consider it their right to engage with Israel as part of their Jewish identity without being held responsible for Israeli politics.

Most American Jews do not vote in Israeli elections and have never served in the IDF. They are not in a position to steer the course of Israel’s future, and most Israelis would probably regard haughty Americans telling them how they should vote or what they need to do for the Palestinians’ welfare with derision; they would invite their American interlocutors to come and live in Sderot and experience rocket warnings and shrapnel falling from the sky before voicing their opinion.

And they would be right. American Jews are not required to police Israel’s political behavior simply because the contemporary culture of their people’s historic homeland is a component of their American Jewish identity.

But the American left disagrees. For Tamika Mallory, Linda Sarsour, Steven Salaita and others, to celebrate Israel is to be complicit in the occupation, which in their parlance amounts to charging American Jews with genocide. Their position on Israel/Palestine is black and white, and it is not open to discussion. They have decided that any Jews with positive feelings toward Israel — however progressive and supportive of Black Lives Matter, of LGBT rights, of fighting Islamophobia they may be — are not only unwanted on the American left, but also represent a threat to their movement.

And it is not simply a matter of keeping quiet about Israel in progressive spaces. The left has made this impossible because the liberation of Palestine “from the river to the sea” is a central part of their agenda; they are the ones — not the liberal Zionists — who have brought Israel/Palestine into what is allegedly a domestic movement to better American society.

To expect a progressive Jewish person to remain silent when Tamika Mallory writes off an entire nation and its history as a “human rights crime” is ludicrous. To expect American Jews to stand idly by while Jewish Voice for Peace publicly declares — with zero evidence — that Israel teaches American cops how to extra-judicially murder black people is not merely ludicrous; it is to remain silent in the face of anti-Semitism.

I am not using the word anti-Semitism lightly, here, and I am certainly not contending that criticism of Israel is inherently anti-Semitic, which is a fashionable (and dangerous) opinion on the right today.

But the slander against Israel on the left treads into anti-Semitic territory. The left subjects progressive Jews to an Israel litmus test, and if they fail it they are unwelcome. No other minority in America — a point I made clear in my previous piece — is subjected to such purity tests. Jews who do not condemn Israel are branded as complicit in Israel’s crimes, much as Jews in the Soviet Union from the 1960s onward were expected to voice contempt for the “Zionist aggressor.”

Indeed, the resemblance between the American left and the Soviet Union’s discourse on Zionism is disturbing; it speaks volumes about the illiberalism and lack of tolerance for non-conformity in self-declared progressive American spaces today, which is truly unfortunate.

Perhaps Reis and Schaefer are correct: the “liberal Zionist” in America is so out of step with the facts on the ground in Israel that the term no longer has much meaning.

Perhaps it would be better if we called ourselves “progressive American Jews who see merit in the existence of Israel.”

We should be allowed to say this in public without being vilified, without being called racists and enablers of war criminals. Saddling American Jews with responsibility for a complex conflict in the Middle East — one in which there is plenty of blame to be parceled out to Arabs, Jews and the international community; one that has proved to be intractable for over a century — is absurd and discriminatory.