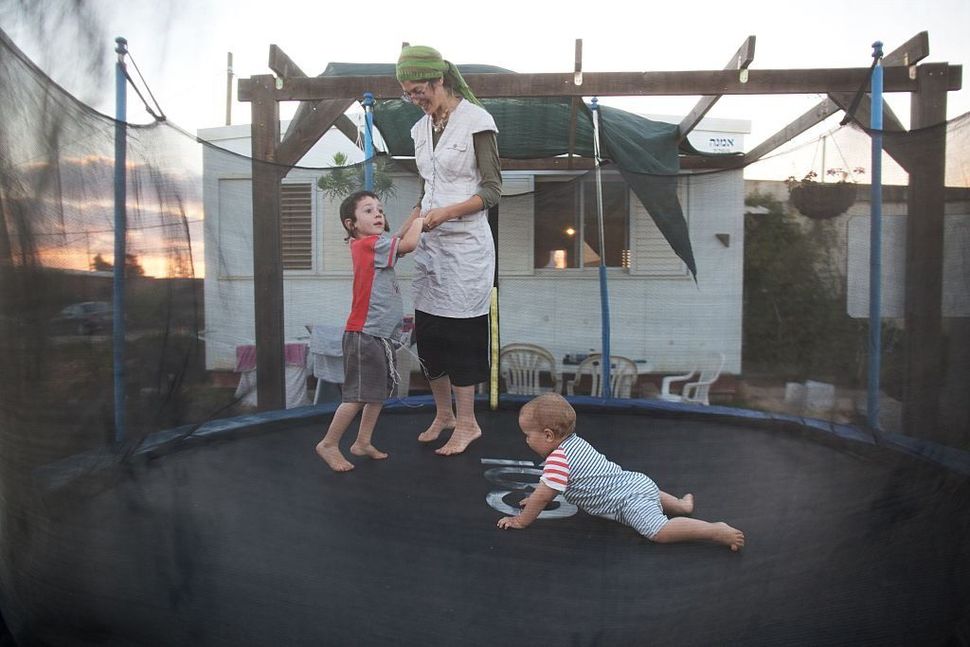 An Israeli woman and her children play outside their home in the Amona settlement, northeast of the Palestinian city of Ramallah, in the Israeli occupied West Bank on September 7, 2016. (Photo by MENAHEM KAHANA/AFP/Getty Images) Image by Getty Images

Is Jewish continuity inherently sexist? In some people’s minds, like the author of a recent op-ed in these pages, Jewish continuity is toxically identified with Jewish sociologist Steven M. Cohen. I’m neither judge nor jury, but if the #MeToo allegations against Cohen are true, and they may well be, the prominent sociologist should be held legally and professionally accountable, full stop.

That said, Cohen’s promoting Jewish continuity or in-marriage doesn’t mean that his research data was inherently flawed, or that Jewish continuity isn’t vital. Unlike other major world religions, Jews don’t proselytize. So, by definition, Jewish adults (primarily mothers, but also fathers if we include patrilineal descent) need to procreate if we want to continue to exist.

And personally, I’m a fan of survival.

Saying that Jews, especially non-Orthodox Jews, should consider having more children isn’t about controlling women or their fertility, so much as it is an acknowledgment of basic math. It can also be an acknowledgement that children — and family generally — are a common source of shared joy and human connection, two themes central to Jewish living.

For any population to remain stable, women must each have 2.1 children. That extra 0.1 accounts for those women who never have children, for whatever reason. Pew Research has reported that the American Jewish fertility rate during 2010-15 was a dismal 1.9, putting American Jews squarely below the replacement rate.

The Jewish fertility rate is even shakier when we consider it masks the gap between the Orthodox and everyone else. As Pew also reported, “On average, the Orthodox… bear at least twice as many children as other Jews (4.1 vs. 1.7 children ever born to adults ages 40-59).”

The fertility rates of non-Orthodox Jews are notably low. For the shrinking Conservative movement, it’s 1.8 children per woman; for the still-sizable Reform, it’s 1.7; and for Jews who claim no denominational affiliation, it’s a rock-bottom 1.4.

So, while any given intermarried couple may raise their children Jewish (mazel tov!), intermarriage’s overall trend is one of shifting away from Jewish affiliation, thereby winnowing the ranks of American Jewry. None of this is to say that the Jewish community shouldn’t welcome or integrate intermarried couples, as the Reform movement and various other communal organizations already do. However, it does mean it’s less likely, statistically speaking, that the children of those intermarried unions will grow up to identify as Jewish, and only Jewish.

This brings us back to individual Jewish women and the question of whether any given woman wants to become a mother. Clearly, in the era before widespread access to birth control and abortion, motherhood was not necessarily a choice. Now it absolutely is.

Millennials, who are in their prime childbearing years, are increasingly opting out of parenthood for a variety of reasons. In a recent Morning Consult survey commissioned by the New York Times’ Upshot, 30% of Millennials who have no children explained their personal situation by saying that they simply have “no desire for children.” Without sponsoring a parallel Jewish survey, it’s hard to know precisely how many young Jewish women fall into this category.

In larger American society, any one adult’s decision to opt out of parenthood is no big deal, because there are already 300 million of us, not every adult is suited to be a parent and we continue to attract new Americans through immigration. However, in a community of about 5 million — where the median adult is 50 years old, four years older than the average American adult — it’s no wonder many Jews are concerned about the next generation.

There is no equivalent of immigration that would boost the size of American Jewry. Adoption is more complicated than it used to be, both domestically and internationally, and even as American Jews adopt more children than the average American, there can be hiccups, especially where conversion is concerned.

Jewish continuity is nothing new. The notion is as old as Abraham, to whom God promised descendants as numerous as the stars in the sky and the sand on the shore. But that promise can’t be fulfilled without contemporary Jews deciding that we still believe in the survival of the Jewish people.