“Where are the Jewish leaders who speak for women?”

Dr. Susannah Heschel asks this critical question in her July 27th opinion piece in these pages. She celebrates Rep. Alexandria Ocasio-Cortez’s recent speech on the House floor condemning Rep. Ted Yoho’s demeaning and insulting language and behavior which, unfortunately, is not unusual for women – especially women of color – to experience.

Heschel accurately addresses the ever-present and pervasive marginalization, inequity and, often, harassment that many – if not most – women experience in the Jewish communal world. In particular, she focuses on the professional Jewish landscape.

Rep. Ocasio-Cortez was speaking for Jewish women because she was sharing an experience to which all women can relate. Her experience as a woman is not “other” than Jewish women, it is inclusive of all of us.

While Heschel poses a critical question and shines light yet again on the very issues that have been fueled by the #MeToo moment, we believe that she, in fact, makes her own point.

“Where are the Jewish leaders who speak for women?” We are right here!

We are working tirelessly every day individually and collectively across our community to speak and advocate for Jewish (and all) women, to shine a light on Jewish women’s work and leadership. We are curating forums, events, and now, webinars, working to end inequity, harassment, assault and abuse. We are speaking and teaching, gathering and organizing, hosting (currently virtual) events, planning and strategizing.

We stand today as a diverse coalition, representing Jewish women from all across the country and the globe, from all walks of life, identities, and religious affiliations: Reform, Orthodox, Conservative, Reconstructionist, Renewal and otherwise affiliated or not; we are Ashkenazi, Sephardi, Mizrachi; we are Black, Indigenous, Latinx, Asian, White, and Multiracial; we are LGBTQ+ and straight; we are philanthropists, CEOs, educators, journalists, volunteers, stay-at-home parents, and more.

And today, as a global pandemic swirls around us, we continue to keep that fight alive even while issues deemed more urgent understandably rise to the top.

Last August, [an article titled “The Week That All Jewish Women Turned Invisible” appeared in eJewish Philanthropy, a daily newsletter followed by a majority of Jewish professionals. It was a response to a week where once again, many new male CEOs were announced at legacy institutions, multiple articles were published celebrating male-only leadership, and panels featuring exclusively male-only leadership were convened.

An effort began on a highly active Facebook Group, “Year of the Jewish Woman and Allies” – now home to 3,261 members, and heavily populated with heads of organizations and public speakers and writers who speak out for women every day, and who are in collegial dialogue there – to grow a movement that speaks loudly and powerfully on behalf of Jewish women.

We thank Professor Heschel for shining a light, again, as we seemingly continue to need to, on the egregious inequities and abuses of women in the Jewish community. Doing so as a public figure whose name garners much respect and reverence only helps our cause.

However, we pose a question in return. If someone with her extraordinary background, education, awareness and engagement in the Jewish community is asking: “Where are the Jewish leaders who speak for women?” then how can we expect those who are less informed to support and join this effort? Whose responsibility is it to know who our female Jewish leaders are and raise up our voices and our work? If we do not take an active role in educating ourselves as well as promoting the work of Jewish women’s leadership every day – then how can we rightfully express frustration and anger when others’ voices are not “loud enough” and remain unheard?

“Where are the Jewish leaders who speak for women?” WE ARE RIGHT HERE.

We are here. We don’t need to be found or for others to speak on our behalf. What we need is the Jewish organizational world to see us as leaders and position us at the heads of our largest tables.

People of stature and influence in the Jewish community: You are part of this work. Make it your business to elevate and amplify Jewish women’s voices, follow our work, use your own voice to give the work greater visibility and credibility. So many women (and men) have stepped up to challenge gender and other inequities, and have spoken as eloquently and forcefully as AOC. Support us, engage with us, listen to our stories. 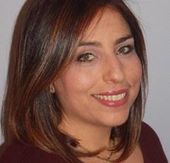 Nicole Nevarez is the inaugural National Director of Ta’amod: Stand Up!, a multi-pronged initiative dedicated to ending gender abuse, harassment and toxic culture in the Jewish communal space. Ta’amod brings this work to the Jewish community with a lens of creating respectful workplace culture rooted in Jewish values. A Jewish educator, trainer and facilitator, Nicole she provides independent coaching to individuals and consulting to mission-critical organizations to support efforts to create positive internal culture. Nicole believes that when we do the work to reflect on ourselves and our organizations, we have the power to impact deep systemic change.