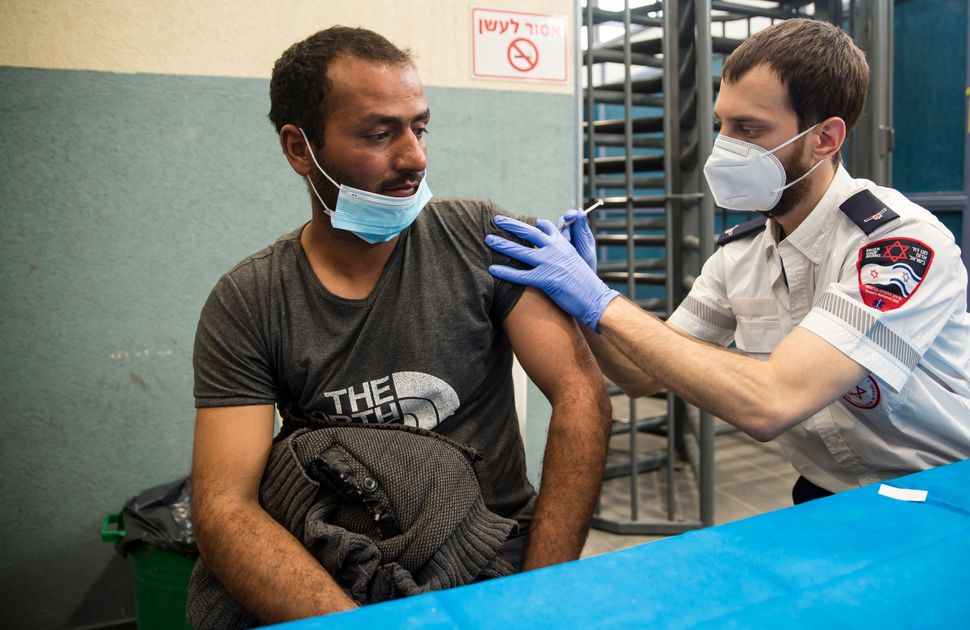 A Palestinian man who works in Israel receives the first dose of a Moderna Covid-19 vaccine by an Israeli medical worker in Meitar crossing checkpoint between the West bank and Israel on March 9, 2021 in Meitar, Israel. By Amir Levy/Getty Images

I write in response to an op-ed written by Sari Bashi in The Forward titled “Yes, Israel Should Vaccinate all Palestinians. Here’s Why.” Her op-ed creates a false impression that Israel is not vaccinating Palestinians, and appears during a time when antisemites around the world are propagating blood libels about Jews and COVID.

Israel includes its Muslim and Christian citizens in the same vaccination program as its Jewish citizens. Critics, primarily on the political left, erroneously claim that international law requires Israel to vaccinate people living under the Palestinian Authority (PA). Under the Oslo Accords, the PA has responsibility for health care in areas under its jurisdiction. As a voluntary agreement among the parties, the Oslo Accords supersede international treaties such as the Fourth Geneva Convention (FGC). Bashi briefly mentions the Oslo Accords, but fails to recognize they control the issue of health care in this setting, including vaccination. Instead, she states that the “law of occupation” — presumably the FGC — requires Israel to vaccinate Palestinians.

Finally, some argue that Israel has an ethical duty to provide COVID vaccines to the PA. Israel provided many thousands of COVID tests, training and protective equipment to the PA. However, the PA then became uncooperative, refusing medical supplies from the United Arab Emirates because they were transported through Israel. PA health authorities initially confirmed that they had not asked for Israel with assistance in vaccinations, instead arranging to get vaccines from the World Health Organization and from Russia. Only after these plans failed to deliver vaccines did criticism turn to Israel. Enemies of Israel eagerly joined in these attacks.

The Forward should not have published this op-ed, as it spreads misinformation about Israel’s COVID vaccination program. People living under the PA and Hamas will continue to suffer because of the ineptitude and corruption of their leaders. This will endlessly continue until the media and diplomats hold Palestinian leadership responsible for their incompetence.