Yes, Israel should vaccinate all Palestinians. Here’s why. 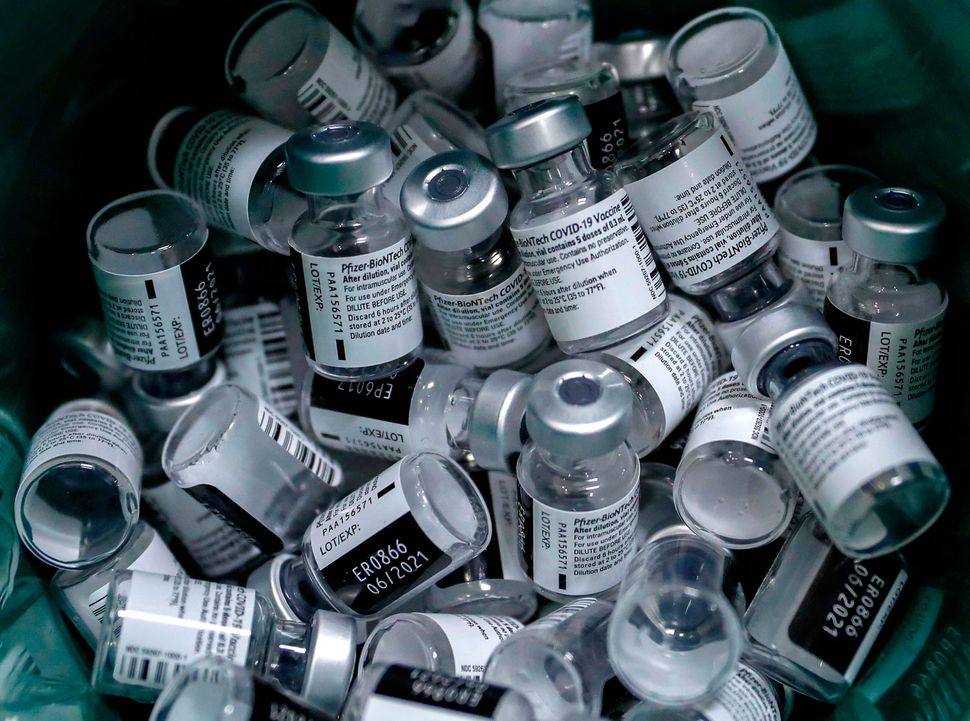 Discarded vials of the Pfizer-BioNtech COVID-19 vaccine are seen at the Clalit Health Services in the Palestinian neighbourhood of Beit Hanina, in the Israeli-annexed east Jerusalem on March 2, 2021. By AHMAD GHARABLI/Getty Images

Editor’s Note: Israel’s vaccination program for its citizens and residents does not discriminate based on ethnicity; Arab-Israelis and Palestinian residents of East Jerusalem are eligible along with Jews, as we reported in this Feb. 16 article, There is debate over Israel’s responsibility to vaccinate Palestinians under the Geneva Convention and the Oslo Accords, as we explained in this Feb. 24 article. We have also published four Letters to the Editor in response to the below Op-Ed; you can read them here, here, here and here.

I have been watching the Israeli government’s COVID-19 vaccination campaign with a mixture of envy and dismay.

Envy, because I left Israel just as vaccines were becoming available. And dismay, because the Israeli government is continuing its systematic discrimination against Palestinians, using ethnic, not medical criteria, to determine distribution.

I belong to the ethnic group eligible for the vaccine. On Dec. 27, I received a text message from the Israeli clinic to which I belong, inviting me to make an appointment to receive the first dose of the Pfizer COVID-19 vaccine. I was eager to get vaccinated, but was flying to the United States for a several-months stay that same day, so I didn’t make the appointment.

But the Israeli vaccine campaign, for all its apparent success, is stained with the fact that it is predicated on a broader system of ethnic discrimination.

The Israeli government exercises control over 14 million people who live between the Jordan River and the Mediterranean Sea, including five million Palestinian residents of the occupied West Bank and Gaza. It refuses, however, to distribute vaccines to Palestinian residents, with the exception of 5,000 doses pledged for health care workers and a promise to vaccinate at least some of the more than 100,000 Palestinians employees of Israeli workplaces.

The Palestinian authorities have been able to obtain only small quantities of vaccine, purchased from Russia or donated by the UAE, and even the most vulnerable Palestinians have little chance of getting access. Their unmet need is painfully common in the context of global injustice in vaccine distribution, but it is egregious because the Israeli authorities governing them have extra vaccine doses in the freezer, and millions more on the way soon. In the West Bank, a 25-year old Jewish resident of the Israeli-only Beit El settlement can get vaccinated, but her 85-year old Palestinian neighbor, living across the street, cannot.

Many don’t believe this inequity is linked to ethnicity. That’s a view of the situation that willfully ignores the facts. The Israeli government formally classifies people as “Arab” or “Jewish” and grants citizenship to Jews and their descendants, including millions of Arab Jews like me, descended from Arabic-speaking families in Iraq, Morocco, and other Arab countries. But it denies the rights of citizenship to Palestinian residents of Gaza and the West Bank, even though nearly half of them descend from refugees from what is now internationally recognized as the State of Israel, and all of them live under Israeli rule.

The Israeli government collects taxes from Palestinians. It registers their births, deaths, marriages and divorces. It issues them ID cards and determines which Palestinians may live in which areas. It controls the movement of people and goods into, out of and within the West Bank and Gaza. It approves or doesn’t approve the entrance of medical equipment and drugs, the travel of health care workers and the ability of patients to reach hospitals.

The Israeli government says that at least parts of the occupied Palestinian territory belong to the Jewish people, but it abdicates responsible for the Palestinians living there. When it comes to establishing Israeli-only settlements and annexing land, the territory is Jewish. When the non-Jews living on it get sick, they’re someone else’s problem.

The Israeli government says under the Oslo Accords, responsibility for Palestinian health lies with the Palestinian Authority, known as the P.A., a semi-autonomous body that exercises limited local government functions, using tax revenues controlled by Israel.

But even the Israeli government acknowledges that the P.A. lacks effective control over Gaza and the West Bank. The cash-strapped P.A. cannot even buy vaccines without permission from Israel, which controls the borders.

Under the law of occupation, the occupying power is responsible for the health of residents and has special obligations to protect them from infectious diseases. The Israeli government’s claim that it transferred those obligations to the P.A. ignores a clear provision of international law that keeps an occupier responsible for the governmental functions it has delegated to local authorities, so long as it continues to exercise control.

In that sense, the P.A. is similar to the Tel Aviv municipality. Both are funded by taxes that the Israeli government collects from residents on their behalf. Both are responsible, together with the central government, for protecting the health of their residents.

And in both cases, if the local authorities can’t or won’t do the job alone, the Israeli government is legally and morally obliged to step in.

In a system of apartheid, we don’t get to choose our place in the ethnic hierarchy. Because I am Jewish, Israel gave me citizenship and then bought me two doses of vaccine, and I will take them when I return to Israel. But it’s not the system I want, and it’s troubling that otherwise astute and respected public health officials view it as a model to be emulated. Top U.S. health official Anthony Fauci erred when he recently praised the Israeli vaccine distribution as a model for the rest of the world. It is not. It’s a warning about how not to manage a pandemic. It’s a warning against classifying people by ethnic identity — and allocating a life-saving resource accordingly.

Sari Bashi is a human rights lawyer and the research director at Democracy for the Arab World Now (DAWN). Follow her on Twitter, @saribashi.

Yes, Israel should vaccinate all Palestinians. Here’s why.