Members of Congress, including those AIPAC-allied, condemn group’s comments about Rep. Andy Levin 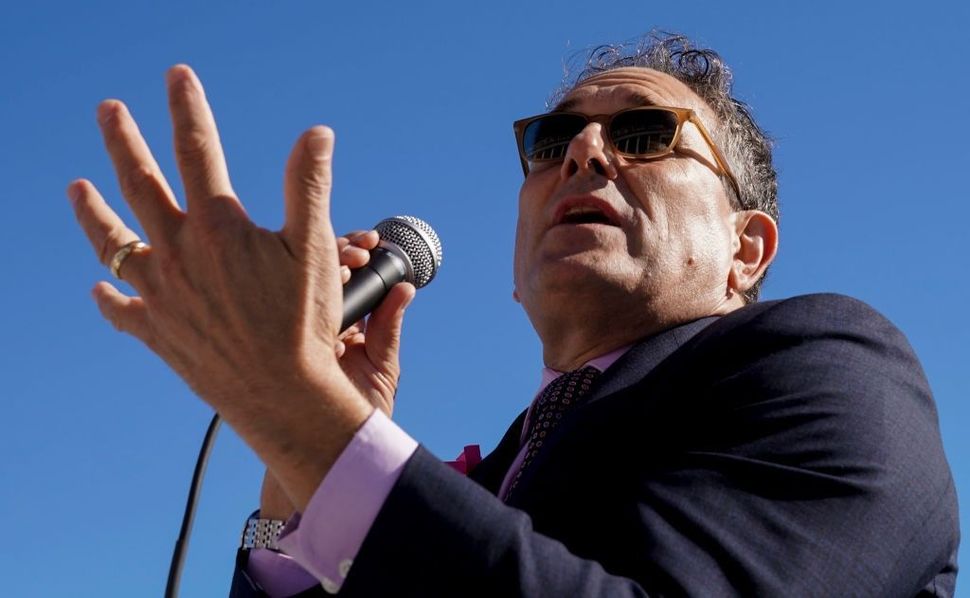 Representative Andy Levin (D-MI) meets with college students from around the United States as they participate in a rally to urge Congress and President Biden to include free community college in the Build Back Better Act at the U.S. Capitol on October 27, 2021 in Washington, DC. By Leigh Vogel/Getty Images for Rise

As former and current members of Congress and supporters of a strong U.S.-Israel relationship, we are all too familiar with how differing policy approaches to ending the Middle East conflict have been used to divide and polarize us as a community, especially during elections. That’s why at a moment when so much is at stake in not only defending our own democracy, but defending democracy around the world, we are dismayed by the shockingly unhelpful and unfortunate attacks leveled against Congressman Andy Levin that have occurred, questioning his support for Israel.

It is fair to disagree on and debate policy approaches. But it is out of bounds to malign the only Jewish candidate in this race by impugning Andy’s love for the State of Israel or his community bona fides, which run strong and run deep. Andy helped organize a trip of Jews, Christians, and Muslims to Israel and the Palestinian territories in 1990. Upon his return he penned an op-ed in the Detroit Jewish News calling for immediate support of a two-state solution to end the conflict.

And as Sandy Levin’s son and Carl Levin’s nephew, Andy has grown up sharing the deep and passionate commitment to Israel that was a hallmark of their respective congressional careers. It is that very commitment that animates Andy’s work on these issues.

Andy’s vision for a safe, secure and prosperous Israel coexisting in a lasting peace with a Palestinian state has been central to his work. In Congress, Andy has been a strong supporter of Israel, whether it’s voting for security assistance for Israel in annual spending bills or supporting the replenishment of funding for the Iron Dome.

It is also true that Andy has been a staunch defender of human rights, which enables him to bridge divides in the Jewish community and exemplify support for Israel in a way that resonates with many younger voters who care deeply about protecting human rights for all peoples.

As current and former members, we also understand the tremendous courage it takes to stake out a principled position like this. Even more, we understand the fortitude it takes to stick by it in the face of outrageous personal attacks for the sole, cynical aim of dividing the Jewish community. They are taking a page right out of the playbook of those who have sought, unsuccessfully, to drive a wedge between Jews and the Democratic Party. We call on others who share Andy’s and our commitment to Israel’s survival and security as a Jewish and democratic country to reject these divisive and counterproductive attacks on Andy.

We should welcome and not fear a Jewish member willing to express his support for Israel by taking up policy questions so seriously and thoughtfully and seeking dialogue across the spectrum. Especially as Congress continues to evolve, Levin will continue to play an essential role in advocating for a Jewish and democratic state in a context where Palestinian rights can also be fulfilled through a two-state solution.

Finally, we hope this race can focus on priority issues ingrained deeply within the fabrics of American Jewish life, guided by the spirit of Tikkun Olam, repairing the world: supporting workers’ rights, expanding access to health care, promoting equity in public education, protecting the environment and advancing the cause of human rights.

Members of Congress, including those AIPAC-allied, condemn group’s comments about Rep. Andy Levin