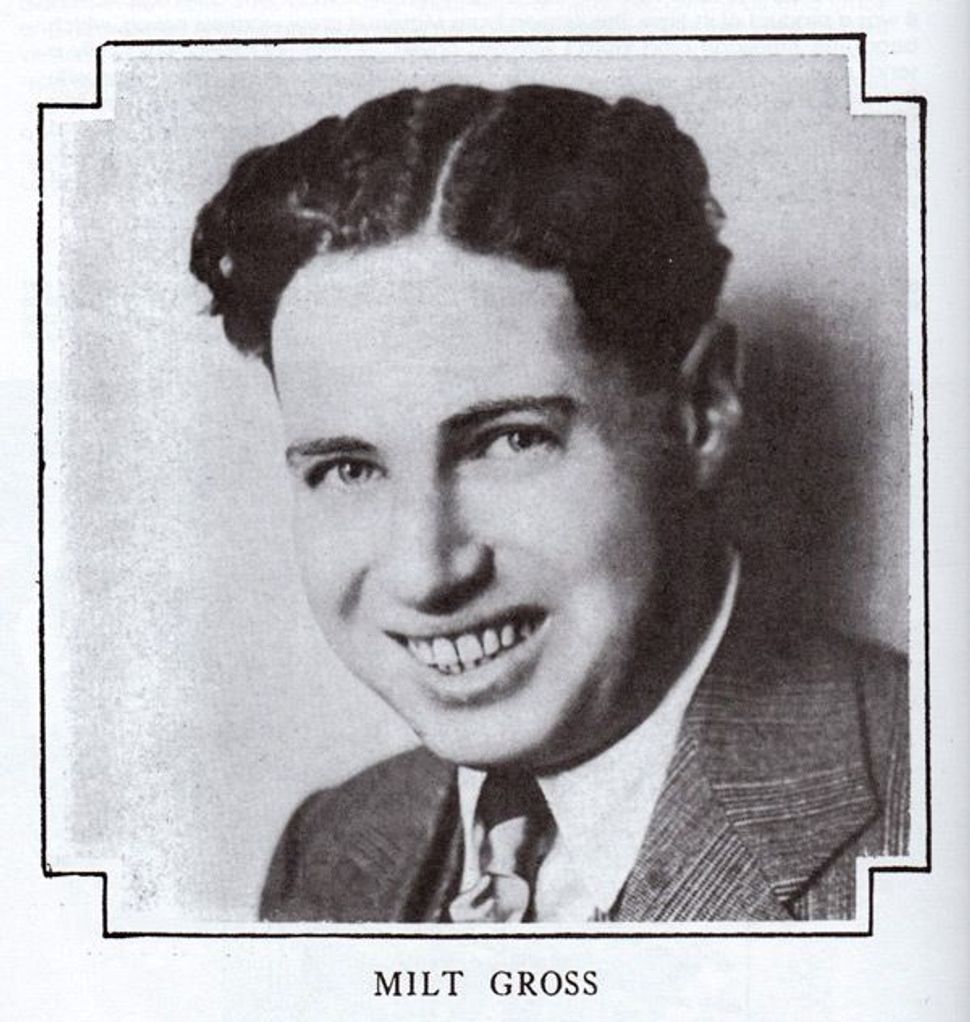 On February 7, at New York’s Museum of Jewish Heritage, a new publication from New York University Press, “Is Diss A System? A Milt Gross Comic Reader” edited by Ari Y. Kelman, will be presented. Gross (born in 1895) of Russian Jewish ancestry, drew comic strips of wild slapstick energy, following in the violence-for-laughs tradition of “The Katzenjammer Kids.” A self-consciously low comedian, Gross drew racist images of black people and was not all that flattering about Jews either.

Gross’s defiantly insensitive gift for visual anarchy got him jobs in Hollywood writing and directing short films like “Izzy Able the Detective” (1921) and “Jitterbug Follies” (1939; see below). Gross was even reportedly hired by Charlie Chaplin to invent sight gags for the silent film “The Circus.”

“Is Diss A System?” avoids this whirling continuity of highly-colored energy and focuses instead on Gross’s use of language in individual black-and-white comic strip panels. Kelman points out that Gross’s comic characters speak with invented accents which, while owing much to Yiddish syntax, do not in fact reproduce the way any living person ever spoke. “Sotch a excitement wot is going on by you in the monnink, Mrs. Feitlebaum,” an average phrase uttered by a Gross character, corresponds to the Yiddish: “aza geruder vos geyt on bay aykh in der fri, Mrs. Feitlebaum.” Yet Gross’s characters never mix Yiddish with their English, or refer to Jewish culture or religious matters. In short, Jewish people are in no way accurately portrayed by Gross. While this is worth underlining, Kelman’s preface is elsewhere marred by errors, attributing D. W. Griffith’s “Birth of a Nation” to Cecil B. DeMille, spelling Eddie Cantor’s first name “Eddy,” and repeatedly spelling Al Hirschfeld’s last name “Herschfield.”

Gross’s texts seem painfully unreadable, like the once-popular writings in dialect by now-dusty humorists like Finley Peter Dunne. Dated language aside, Gross’s amazing gift for [action][3] and taste for puncturing pretensions are what keeps his artistry fresh, and these will continue to win him new fans.