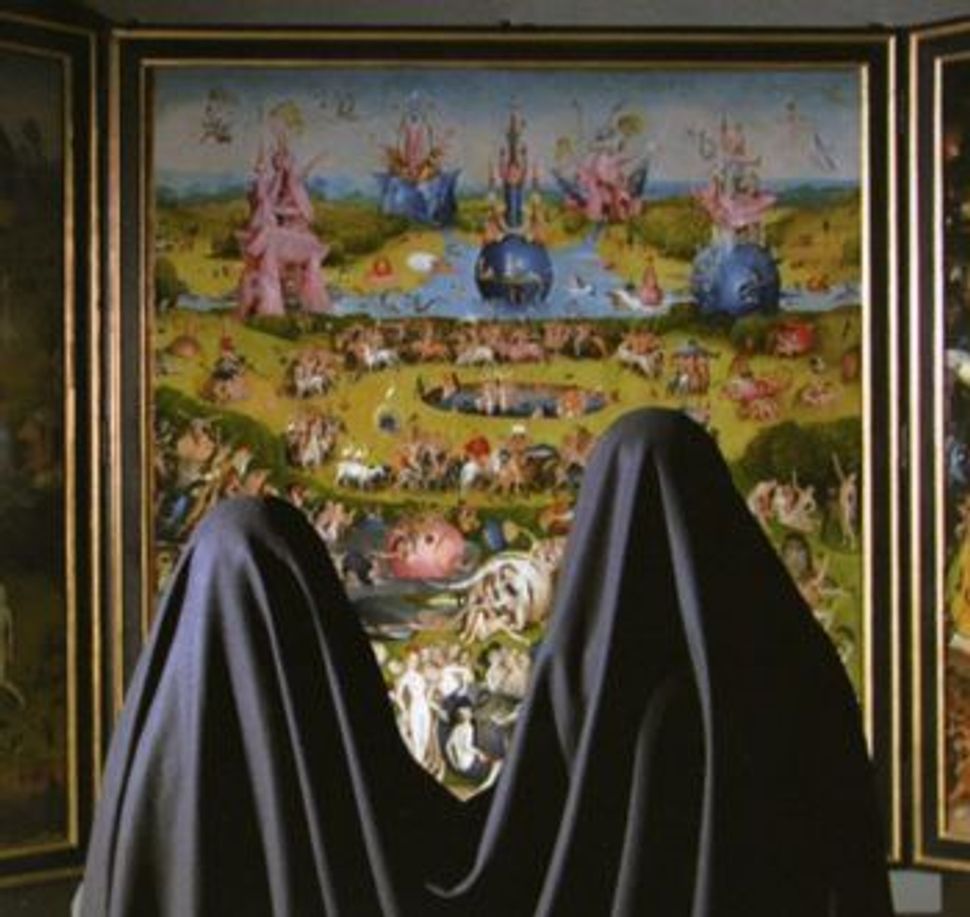 Art lovers eager to rethink the inherent truth in the media of photography and video have until May 30 to catch “Adad Hannah: Masterpieces in Motion” at Connecticut’s Aldrich Contemporary Art Museum.

Born in New York in 1971, Hannah was raised in Israel, London, and Vancouver. Based in Montreal for several years, Hannah has created videos and still images depicting his family, like “Murray and Beverly,” a minute-long silent 2002 video of his great-uncle and great-aunt sitting in a corner of their Florida living room, almost inert. The more animated “Dinner In Florida,” also filmed in Delray Beach, Florida in 2002, features Hannah’s “grandmother, grandfather, and several other great-aunts and great-uncles” silently enjoying coffee and cake. Could there be some allusion to a utopia in which Jewish family elders are present, yet never utter a word?

“Adad Hannah: Masterpieces in Motion,” the artist’s first solo US exhibit, focuses on other questions involving art and representation. Hannah is quoted in the Aldrich Museum press release: “I’m interested in undermining the verity of the photographic image by drawing attention to the element of performance inherent within photography. Video allows me to slow down and expand the photographic moment, creating a space for reflection that transforms passive viewers into self-conscious historical agents.” This translates to filming young Canadians from 100 Mile House, British Columbia, in positions and garb imitating Géricault’s “Raft of the Medusa.” Bosch’s “Garden of Earthly Delights” and “Velázquez’s “Las Meninas,” respectively, were shot in Madrid’s Prado Museum in where the latter two paintings are located. Videos of these posing sessions, along with still images, comprise the Aldrich exhibit.

In one sense, Hannah’s version of “Raft of the Medusa” brings the viewer closer to Géricault’s studio experience, but the amateur Canadian models move considerably more often than the Frenchman’s 19th century professional models would have done. By not holding their poses, Hannah’s volunteers are free, disobedient, and anarchic in relation to the artistic process.

There is also a subset of Hannah images in which paintings by others are touched, assaulted, and otherwise interfered with. Since Hannah seeks to undermine the “verity of the photographic image by drawing attention to the element of performance,” one wonders if Hannah’s own publicity photos are also part of the process; his Jew-fro hairstyle is so full of wild kinetic energy, might it be a postmodern allusion to Leonardo da Vinci’s drawings of his assistant Salai? A question for future Canadian art history PhD theses to ponder.