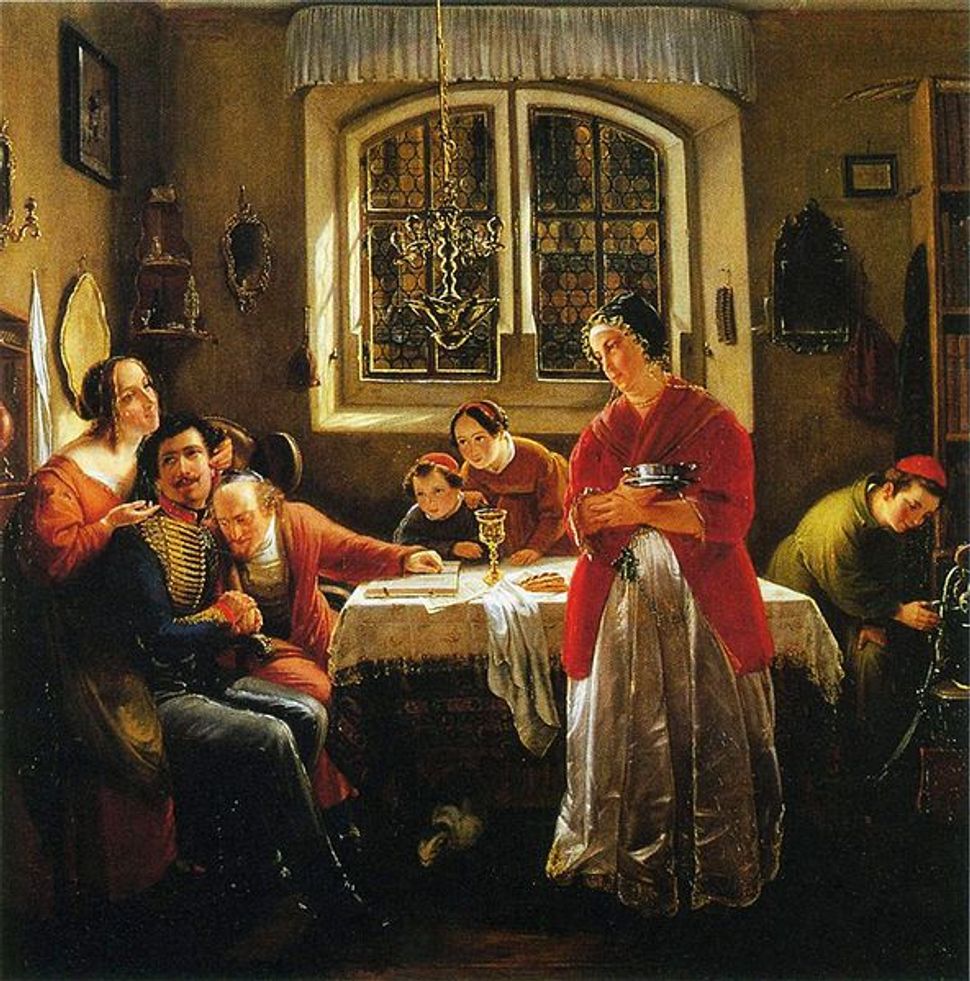 Moritz Daniel Oppenheim, ?Return of the Volunteer from the Wars of Liberation to His Family Living According to the Old Customs,? 1833-34

Heinrich Heine’s novel “The Rabbi of Bacharach” describes a medieval Judengasse whose residents are “pressed together like sardines and thereby crippled in body and soul.” Heine describes an apostate Spanish Jew named Don Isaak Abarbanel who revisits the Judengasse merely to taste Jewish dishes like “carp with brown raisin sauce” and “steamed mutton with garlic and horseradish.”

Equally appetizing are the idyllic paintings of domestic scenes in the Judengasse by Moritz Daniel Oppenheim, Heine’s contemporary. With undue optimism, Oppenheim sought to demonstrate how even “before civic equality, during the period of their oppression, the Jews had already possessed the values of the new middle class.”

In one chapter of “The Frankfurt Judengasse,” historian Fritz Backhaus notes that 15th century Jews found a degree of protection in the ghetto. When they had to walk through the adjacent Schmiedegasse (blacksmith’s alley), by contrast, German “workers and apprentices would repeatedly throw stones at them or mock them cruelly.”

Two chapters of the book are devoted to the anti-Semitic German ethnographer Johann Jacob Schudt, whose 1714 “Jewish Curiosities” recorded the “unchastity” and “impudence” (frechheit) of Judengasse Jews. Maria Diemling, co-editor of 2009’s fascinating “The Jewish Body: Corporeality, Society, and Identity in the Renaissance and Early Modern Period” from Brill Publishers, notes that Schudt’s study is “not for the faint-hearted,” focusing as it does on the so-called “foetor judaicus,” a Latin term for the widespread belief that as a group, Jews smelled unpleasant.

Schudt “scientifically” tries to explain this notion by asking a “not unlearned Jew” of his acquaintance, who hazards a guess that this supposed smell might be “emitted by an empty stomach, the result of the common fasting among Jews.” Schudt decides that a more likely explanation is that Jews cook with garlic. Nothing, however, can readily explain why, according to Schudt, Judengasse residents are so ugly: “They have in general big heads and mouths, pouting lips, protruding eyes and eyelashes like bristles, large ears, crooked feet, hands that hang below their knees, and big shapeless warts.”

Yes, shapeless warts. At least Judengasse’s Jews, alongside their past and future woes, did not have to suffer shapely warts.