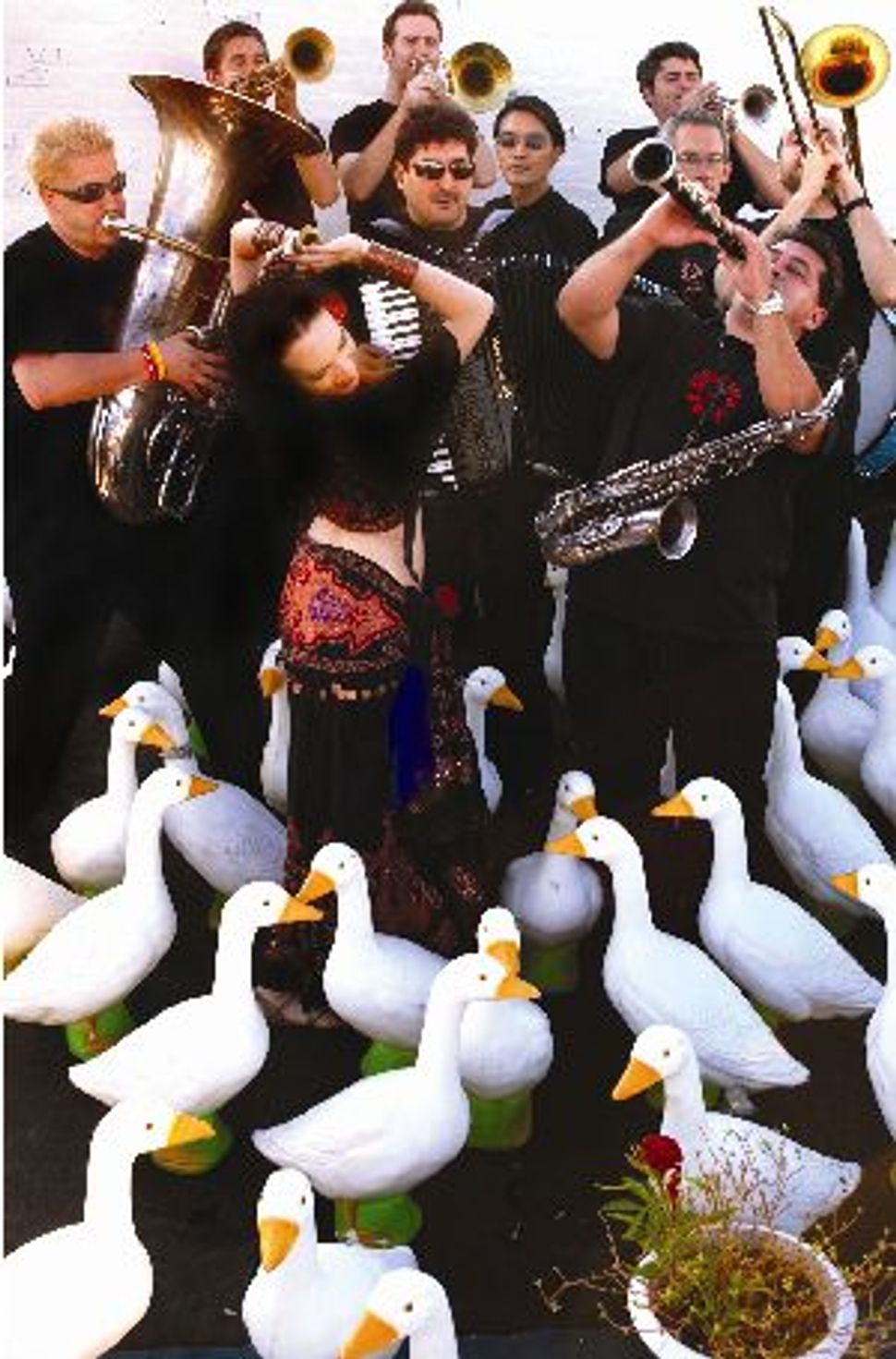 There are no vocals in Slavic Soul Party!, which sets them apart from their fellow Gypsy Punk travelers Balkan Beat Box and Gogol Bordello. Instead, they are all about the music. On “Taketron,” their fifth and most recent album on the Barbès label, Slavic Soul Party! unleashes jazz jams over gypsy grooves and military marches. These 13 tunes feature horns, drums, and accordion that play with precision at a punk rock pace, and the volume that makes brass instruments an orchestra’s loudest bunch. If you have a migraine, this isn’t the record for you. But if you want to dance and sweat like you’re at a Baltic bash, then go ahead and press play.

While Slavic Soul Party! revels in their rowdiness, their sound stops short of cacophony and chaos. “Taketron” is eclectic, but never esoteric. The frenzy is mitigated by the catchiness and simplicity of their melodies and harmonies. Listeners should recognize the oompah oompah pulse of “Tatiana” and “Sarba,” a Moldovan folk tune. And the band’s version of “Canaan Land,” a Scottish-American folk tune, sounds like a New Orleans take on “Tutti Frutti.”

Below the trumpet, saxophones, trombones and accordions, bandleader Matt Moran drives the rhythm; his drums help give “Taketron” its rah-rah sound. Moran also shows a multicultural range with his arrangements of songs by Spanish guitarist Gerardo Núñez Díaz and The Rebirth Brass Band. And his arrangement of “Laughter Club” appears in the eponymous film about the practice in India, a subject recently covered in The New Yorker. Moran also plays vibes with avant-garde composer John Hollenbeck, proof of his musical bona fides.

Another key player is trombonist Jacob Garchik, who composed or arranged five songs on “Taketron,” including the title track. Garchick, who appeared on the last several Slavic Soul Party! albums, has released three albums as a solo artist and has worked with heavyweights from the Kronos Quartet to Anthony Braxton.

The players’ pedigrees are reflected in their musicianship, from the tight baritone sax riffs that open the album, to the plaintive trumpet on the last track, “Hymn.” The high-energy “Baltika” features a trombone solo by Brian Drye, who wrote the tune and whose resume includes stints with Hollenbeck and indie rock superstars Arcade Fire. And given the band’s Brooklyn base, their multi-cultural bent, and the party vibe of “Taketron,” it’s not a stretch to guess that “Baltika” alludes to Eastern Europe’s largest brewery, whose beers are sold in Greenpoint, the Polish neighborhood that has evolved into a hipster enclave. L’Chaim!