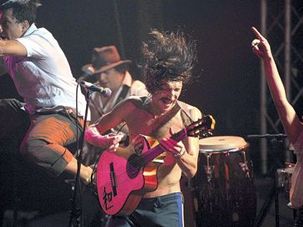 How Good is Gogol Bordello?

Imagine a klezmer band where the vocalists rap in English, chant in Arabic, and sing in Spanish and Serbian. That band is Balkan Beat Box, a group led by two Israelis — Ori Kaplan (saxophone) and Tamir Muskat (drums) — who merge traditional Mediterranean, Middle Eastern and Eastern European sounds with hip-hop and electronica.