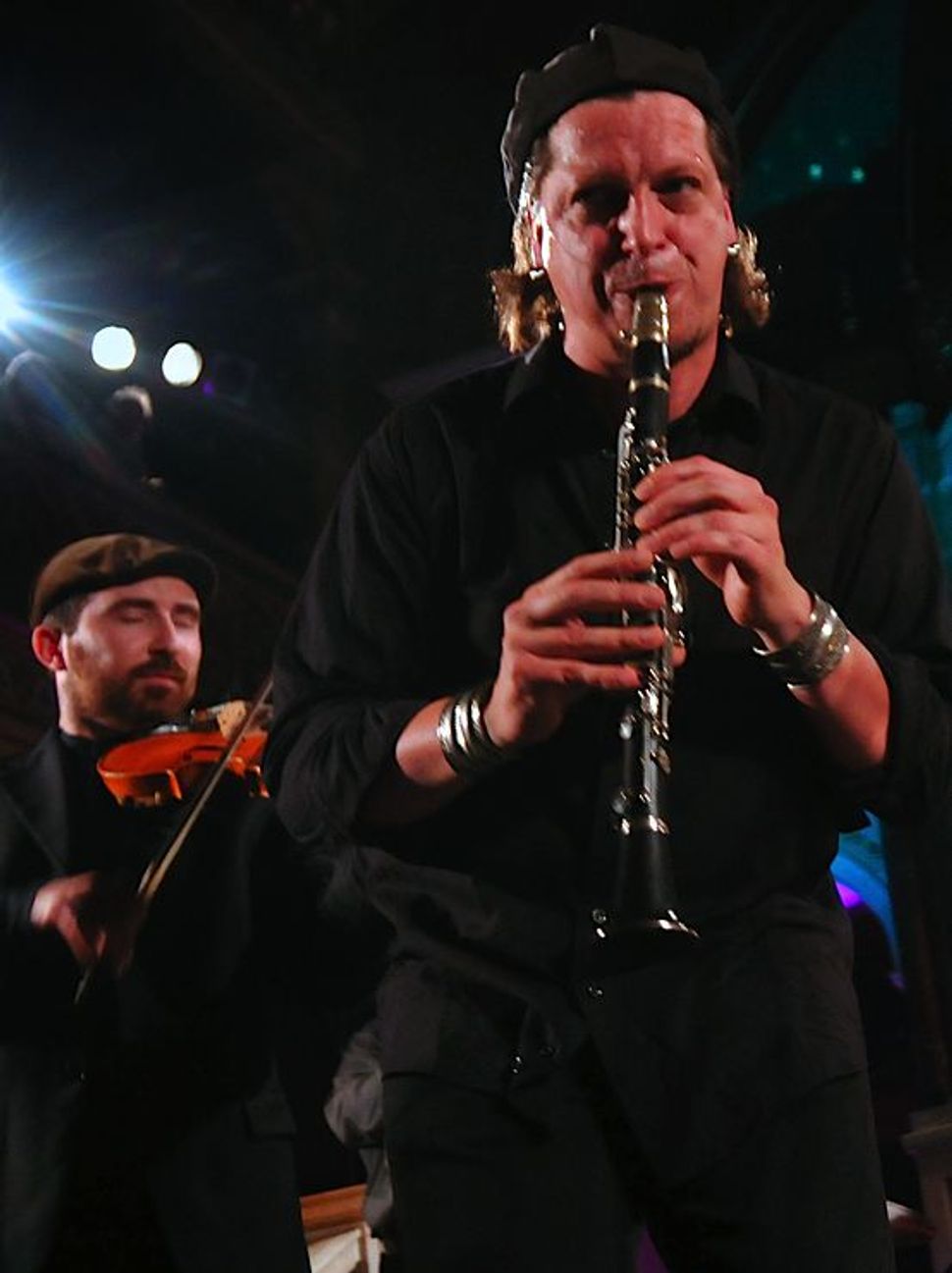 Stanislav Rayko, left, and Christian Dawid of The Other Europeans. Image by Ashkenazfestival.com

The festival was created in 1995 as a forum for klezmer and Yiddish music, but has since developed beyond its original Ashkenazic mandate. It now includes Sephardic and Mizrahi artists, and has become a mecca for cross-cultural fusion and experimentation.

This year’s festival features more Sephardic and Mizrahi artists than ever before, said Ashkenaz artistic director Eric Stein, who recognizes the elasticity of any of these categories. He cites festival performer Gerard Edery, a Moroccan-Jewish musician, as representing the fluidity of Sephardic traditions. Edery’s travelogue takes audiences on a lively musical tour through Spain, North Africa, and the Middle East.

Innovative Jewish fusion acts will complement the festival’s more traditional musicians, Stein promises. “Wherever Jews…have scattered around the globe, they’ve always adapted to their local circumstances and developed hybrid forms to reflect their roots, but also reflect the local environment,” he said.

One such outfit is Balkan Beat Box, an Israeli trio co-founded by former Gogol Bordello saxophonist Ori Kaplan and Firewater’s Tamir Muskat that layers klezmer motifs on top of hip-hop, dancehall, and Mediterranean rhythms. Meanwhile, Ashkenaz’s founder, trumpeter David Buchbinder, will perform with his Odessa Havana project, a collaboration with Cuban maestro Hilario Durán that draws on medieval Spain as a shared ancestral home of both Jewish and Afro-Cuban music.

One of the festival’s major headlining acts is The Other Europeans, a collective of 14 klezmer and Roma musicians. Before the persecution of both groups before and during World War II, the Jewish and Roma cultures shared space and musical roots in Eastern Europe. “This is going to be a fantastically explosive and amazing concert that people are going to go crazy for,” Stein said, adding that a panel discussion with the group will highlight the centuries-old collaborative history of the two cultures.

In addition to music, the festival will offer visual art, theater and film. Stein is particularly excited about Frank London’s “A Night in the Old Marketplace,” an oratorio that injects I.L. Peretz’s eerie 1907 play with cabaret, jazz, and, yes, klezmer. “It’s kind of like avant-garde opera to some extent, projections and narrations that tell a story with this hip, cutting-edge music happening,” Stein explained.

The festival prides itself on its independence from any religious or political leanings, focusing instead on inclusiveness. Stein reports that many visitors have said that they have found new ways to engage with their Jewish identities through the festival. “Part of our mission is to draw attention to the great artistry and the great creativity that is emerging out of Jewish art forms,” he said.

The cultural engagement doesn’t stop with Jews — over half of the festival’s audience is non-Jewish. It is this tradition of influencing and being influenced by different cultures that has allowed so many of the festival’s performers to develop their hybrid forms. “I think there’s more explicit sharing and celebrating of that diversity as opposed to segmenting it into little communities,” Stein said of Toronto, arguing that the city’s multiculturalism makes it an ideal setting for cultural festivals. “The palate of sounds that people can draw on and be influenced from is so much bigger and broader than it ever was.”