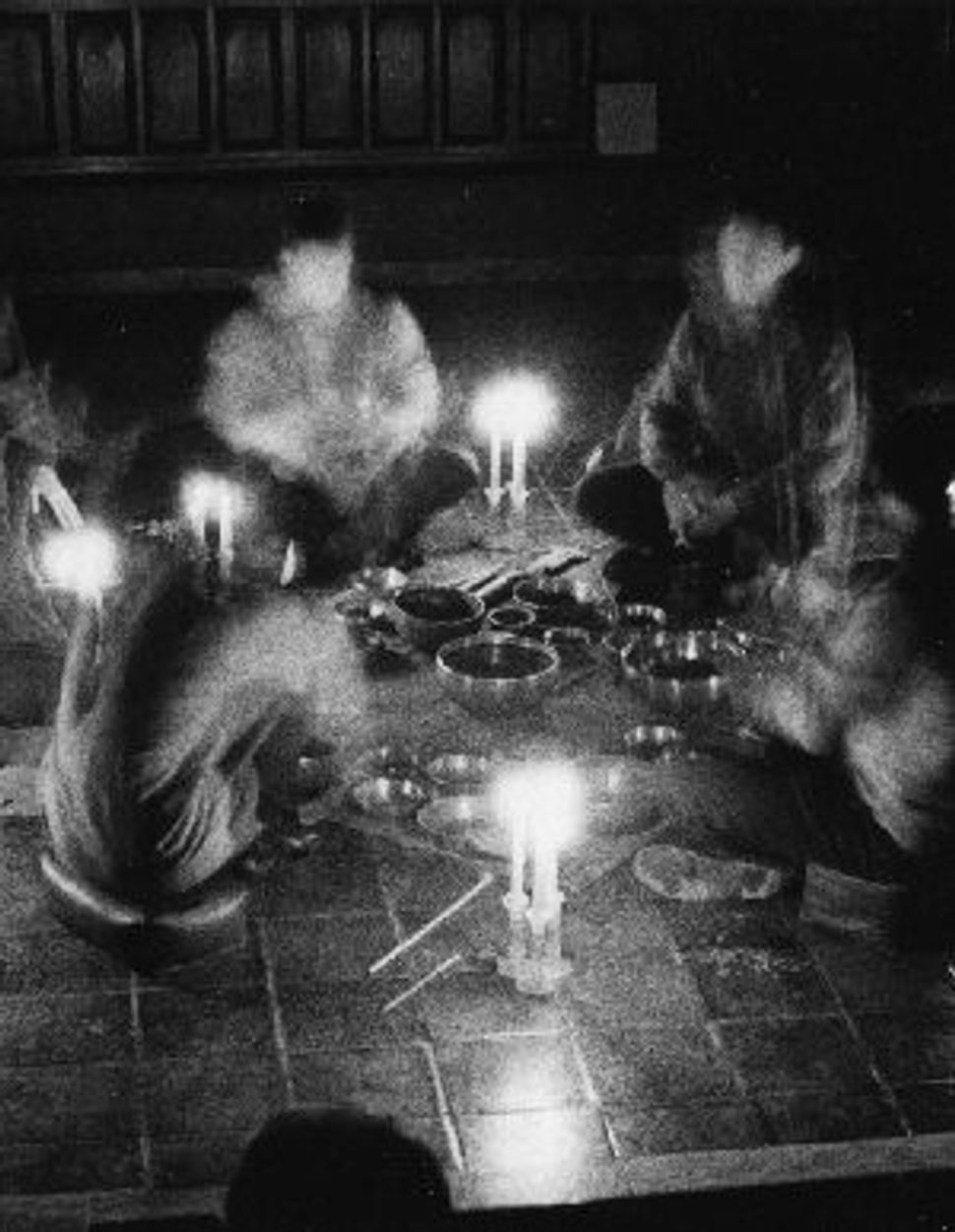 The subject, “The Mysteries of the Tibetan Singing Bowl,” was appropriate for a Halloween afternoon. “The world is just as full of magic as it has always been,” Mostel began, rubbing the edge of a large singing bowl to produce an eerie ring. He demonstrated what he meant with a brief explanation of the history and science of musical vibration. Using instruments from the museum’s collection, Mostel showed the sonic difference between gongs and bells, which resonate from the center and the edge respectively. He played a video of rice moving on a vibrating plate to show the physical effect vibration has in the real world. The images of the rice shifting into a series of mandala-like shapes as the vibration changed pitch proved Mostel’s point about magic almost single-handedly.

But the heart of the demonstration was a performance by Mostel’s Tibetan Singing Bowl Ensemble, the first it’s given in 16 years. The group played Mostel’s composition “Music for the October Moon,” a piece in five movements for six performers on singing bowls and two soloists on horns and conches. Rubbed and struck by the players, the singing bowls emitted a series of metallic screeches, dings and thrums that never let you forget their materials — mixed metals, each with its own sonic character, producing multiple tones and overtones. Because of this almost irrational harmonic quality, these instruments emphasized not just their own materiality but that of sound itself. As the tones moved and shifted in the Met’s auditorium, you could feel the sound waves spreading like ripples from the edge of each bowl.

The six performers, Mostel among them, at times held the bowls up to their mouths as though drinking from them. As they opened and closed their mouths next to the bowls, the tones pulsed as the sound waves were intercepted and shifted by the players’ mouths. Because the singing bowl’s sound is so close to the vibrato in a human voice, this interaction of body and sound became a visual metaphor for the music.

Later in the piece, players moved dried leaves around inside the singing bowls, stirring them with their hands or with sticks to produce a gentle rustling. Others cracked sticks of different sizes between their fingers, each stick breaking in a different tone. This may have seemed a bit literal, evoking the natural sounds of fall visually as well as sonically, but it was touching nonetheless. The sounds, minimal, almost incidental, melted into the low throb of the bowls, quiet but still strong enough to separate themselves from the sounds of the audience shifting and coughing in their seats.

This peace was shattered, however, by the earsplitting sound of two conches from the auditorium’s balconies. The grunts, moans, shrieks and hisses of the shells, shofars and the other horns the soloists played were so odd that they might have been funny, had they not also been so disturbing, sounding as they did like something in pain. Throughout these solos, the gently discordant hum from the bowls continued.

When the music was over, the performers held the bowls in their hands for almost a full minute as the vibration faded away. But the sound was so insistent that it almost seemed to continue even after it had gone. As Robert Thurman, the Dalai Lama’s translator, once told Mostel, the singing bowl’s sound “sits in the ear, and waits until you’re ready for it. Then it goes right in.” It was, as Mostel intended, a beautiful demonstration of a wild scientific magic at play in the real world.