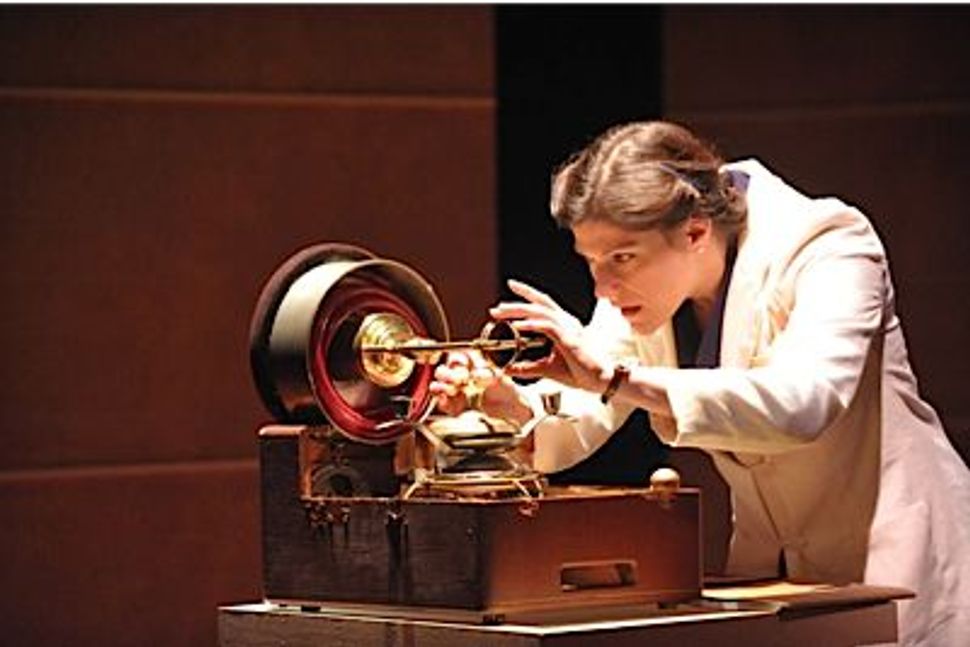 Watching the current production at Washington D.C.’s Theater J of Anna Ziegler’s “Photograph 51,” which tells the tragic tale of Jewish scientist and almost Nobel laureate Rosalind Franklin (1920-1958), I was reminded of Walt Whitman’s poem “When I Heard the Learn’d Astronomer” (1900).

Whitman’s narrator, who finds himself “tired” and “sick” of all the proofs and figures in the academic astronomy lecture he is attending, decides to glide out of the room and look up in rapture at the “perfect silence of the stars.”

Just as Whitman’s narrator chooses life over science (as if it is the case that never the twain shall meet), “Photograph 51’s” distinguished cast, directed by Daniella Topol, are forced into a Nietzschean choice between the Dionysian and the Apollonian — between fun and math.

The play tells the story of the discovery of the structure of DNA in 1953. While scientists James Watson (James Flanagan), Francis Crick (Michael Glenn) and Maurice Wilkins (Clinton Brandhagen) are after hours drinking buddies and friends, Franklin (Elizabeth Rich) neglects office politics and socializing and devotes herself to her work.

The truth is, however, that Franklin is barred from the senior common room because she is a woman. She tells her doctoral student Raymond Gosling (Alexander Strain), who tries to comfort her with the argument that biophysicists aren’t great conversationalists anyway, that “scientists make discoveries over lunch.”

She’s right. Not only does Wilkins end up sharing one of her photographs (Photograph 51, to be exact) with Watson and Crick without her permission over drinks, but the group often attacks Franklin for being a stiff. Both Watson and Crick are portrayed more as frat boys than as scholars, with Watson noting at one point, “The Jews really can be very ornery,” and Crick suggesting that Franklin may have been more successful had she been more friendly.

Tragically, despite Franklin’s devotion to her work, she does not share the Nobel Prize with Watson, Crick and Wilkins, though she discovered the bulk of the contours of the double helix. In a haunting scene in the play, Watson and Crick build their double helical model in slow motion as Franklin takes a rare break from her research.

Franklin eventually gets wind of how her research and her life are passing through her hands, and as the plagiarists complete their model, she falls to the floor in pain from a croquet ball-sized pair of tumors in her ovaries.

“For a moment I think of naming one Watson and the other Crick,” she says, “but no, I tell myself. Rosalind, dispel the thought.”

In his introductory note in the playbill, Theater J artistic director Ari Roth suggests that scientists’ discoveries and actors theatrical breakthroughs aren’t all that different. “Both come only after endless research and development involving countless hours behind an instrument, devising outlines and calculations while laboring to intuit a functional structure; an architecture capable of holding an undulating, living thing within its confines,” he writes.

Of course the yield is very different. While Watson and Crick — scaling their mountain on Franklin’s shoulders — map the contours of genetic structure, theater doesn’t usually offer anything quite so monumental. But just as “Photograph 51” argues for a reevaluation of Franklin’s place in history, it also questions whether science and theater are not more similar than they seem.