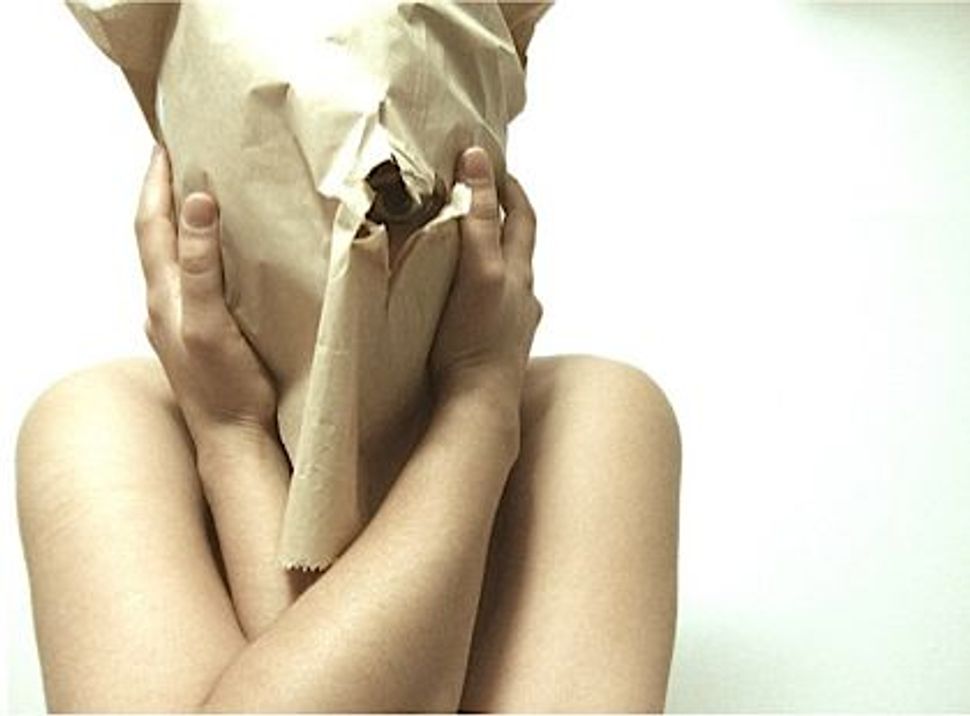 A photo of a woman wrapped in phylacteries might not seem very bold after Leonard Nimoy’s “Shekhina” project. But to many of the artists at the opening of a new art exhibit called “All in the Eye,” a photograph of a woman adorned with tallit and tefillin, eye to the camera with a slight smile, represents the height of sacrilege.

The woman in the photo is ex-Hasidic, as is the artist who took it. Both hail from a culture in which the act is still shocking and offensive: a woman entering a man’s domain in search of spiritual fulfillment. The portrait, of course, is powerful both for its rejection of traditional values and the re-appropriation of its ritual objects — especially given its personal context. But it’s the playful, slightly mischievous smile that is most captivating. It is as if both subject and artist, still, after many years, delight in the act of ritual subversion.

A similar subtext is present in several of the pieces in “All in the Eye.” The show is presented by Footsteps, a Manhattan organization that assists formerly Hasidic and Haredi individuals to explore possibilities beyond their communities. According to Michael Jenkins, Footsteps’ Director of Programs, the organization has been encouraging members to use art in their journeys away from a circumscribed life of piety and restrictions towards one of individual choice and expression.

Indeed, during one of my first visits to the Footsteps space, soon after my own decision to split from the Hasidic community several years ago, I noticed a mural covering a large wall of the main room. The mural had a graffiti-like quality: Anyone could pick up a pencil, crayon, or paintbrush and draw or doodle to their heart’s content. There were witticisms scribbled at various angles, stick figures doing fun (and maybe dirty) things, random musings, and here and there little bits of inspired creativity. The latest show, according to Jenkins, is an outgrowth of that mural, and represents the maturing of both the organization and its members.

“This needs to be shown,” Jenkins remembers thinking when he first saw some of the work that the artists brought in. “I knew there were several artists among our members, but for 10 out of the 13 artists, this is their first real exhibit.” Three of the artists did have prior experience in the professional art world. One of them is Hadas Rivera-Weiss, an artist from San Francisco — originally from the Satmar community in Williamsburg — who flew in for the opening event and whose art adorned the cover of the event’s invitation.

“Where I come from, creativity is valued almost exclusively in a religious context, such as the beautification of ritual objects,” Rivera-Weiss wrote in an e-mail. “While this was limiting, it also instilled in me a lifelong appreciation for practical art and more important, a passion for integrating art into day-to-day life.”

The piece that most caught my attention, and lingered in my mind long after I left the opening reception, was “Scars,” created by an ex-Satmar woman from the Hasidic town of Kiryas Joel in Upstate New York. The work is a collage of sorts, the layering of various fabrics, each of which once served as the distinctive kerchief worn over a shaved head by the most devout Satmar women, who often eschew the practice of wearing full wigs. But more often than not, the kerchief — referred to in Yiddish as a shpitsel — is worn by family dictate, not personal conviction, and that’s precisely the sentiment conveyed by one element in the piece: a large cluster of hairpins used to hold the kerchief in place. The kerchiefs themselves, when worn, are what the public sees; the pins are in the woman’s private world, a reminder, perhaps, of the prickly nature of what we use to keep things in their place, allowing the world to see only the exterior of smooth white silk, serene pastels, or bright floral prints.

The kerchief, the “Scars” artist wrote in the accompanying artist statement, is an “extremely symbolic and conspicuous [article of] clothing, like a scarlet letter. It symbolizes that the woman wearing it is extremely religious and is expected to behave as such… When I wore it, I always felt imprisoned by it.”

As for the exhibit itself, the artist, who didn’t want to be named in this article, wrote in an e-mail that it represents opportunities that Footsteps members “wouldn’t otherwise think possible or within reach. It also represents a degree of pride and dignity in the direction of the Footsteps community.”