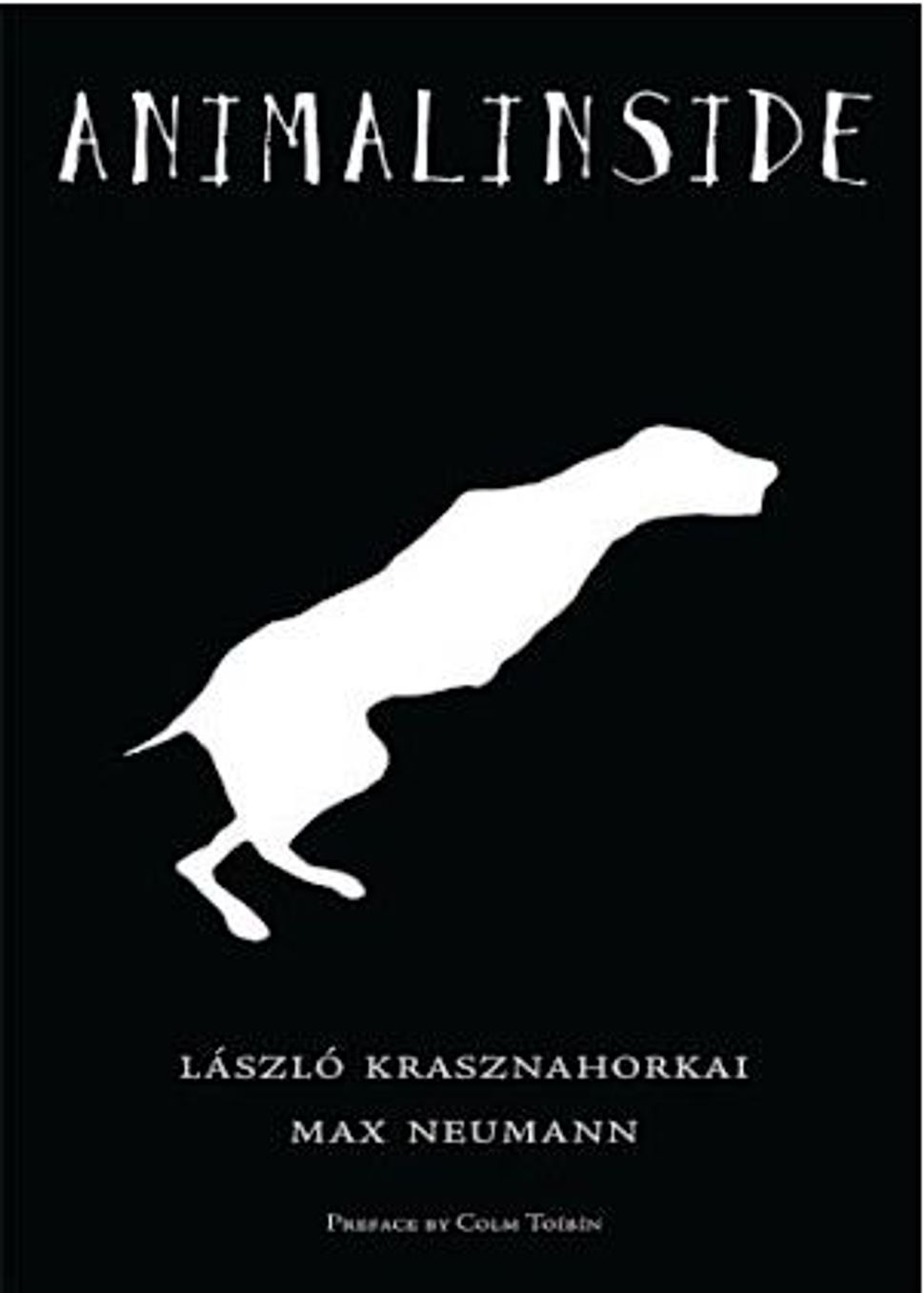 Krasznahorkai originally wrote a text in the third person to illustrate a painting of Neumann’s. In it, a ferocious black beast is suspended and elongated mid leap along the contours of a bare pastel expanse. Posts, fuzzy architectural motifs and the occasional outline of a human figure inhabit the beast’s barbed wire-enveloped world. The entire text is composed of his letting loose a primordial howl in impotent rage:

He wants to break free, attempts to stretch open the walls, but he has been tautened there by them, and there he remains in this tautening, in this constraint, and there is nothing else to do but howl, and now and forever he shall be nothing but his own tautening and his own howling…

Neuman responded in kind with a series of a dozen more paintings to be narrated by Krasznahorkai. In these, the point of view shifts to the animal’s wracked first person ranting. Our beastly narrator is by turns pitifully weak and pitilessly vicous. He pleads that “you are my master; I am inside you, just like that, inside you” and threatens “because I only want you to know, it is enough that I am stronger than all of you, I, for whom it is enough to conquer you, and I will conquer you.”

In his woofing, whelping, roaring and pleading he is beyond the slightest action and agency, but not beyond a capacity for transfiguration. The number of beasts in the paintings multiply even as he laments being “alone, endlessly alone, so incredibly alone that apart from me there isn’t in fact anyone else at all.” After turning in on upon itself, the animal splits into two charging beasts, “tensed, on each side pure muscle… asking only the question / which of the two of us shall be king.”

The collusion of painting and text (it is a viscerally gorgeous artifact) fashions something between an illuminated serial novella and an interlinked cluster of prose poems. In this temporal fiction, the painting’s spatial frame is the cage of time imprisoning and imprinting the beast in an existential penal colony, a sentence of eternity bereft of redemption. The landscape of the bleached out pastels and denuded ghostly spaces is the two dimensional cartography of movements in the third dimension that the beast will never make. The text constitutes a metaphysically bleak and unbreachable fourth. Our empathy finds us both looking from inside and outside this exquisitely constructed panopticon, simultaneously both observer, and the “animal inside.”