Unraveling the Mystery of Jewish Food 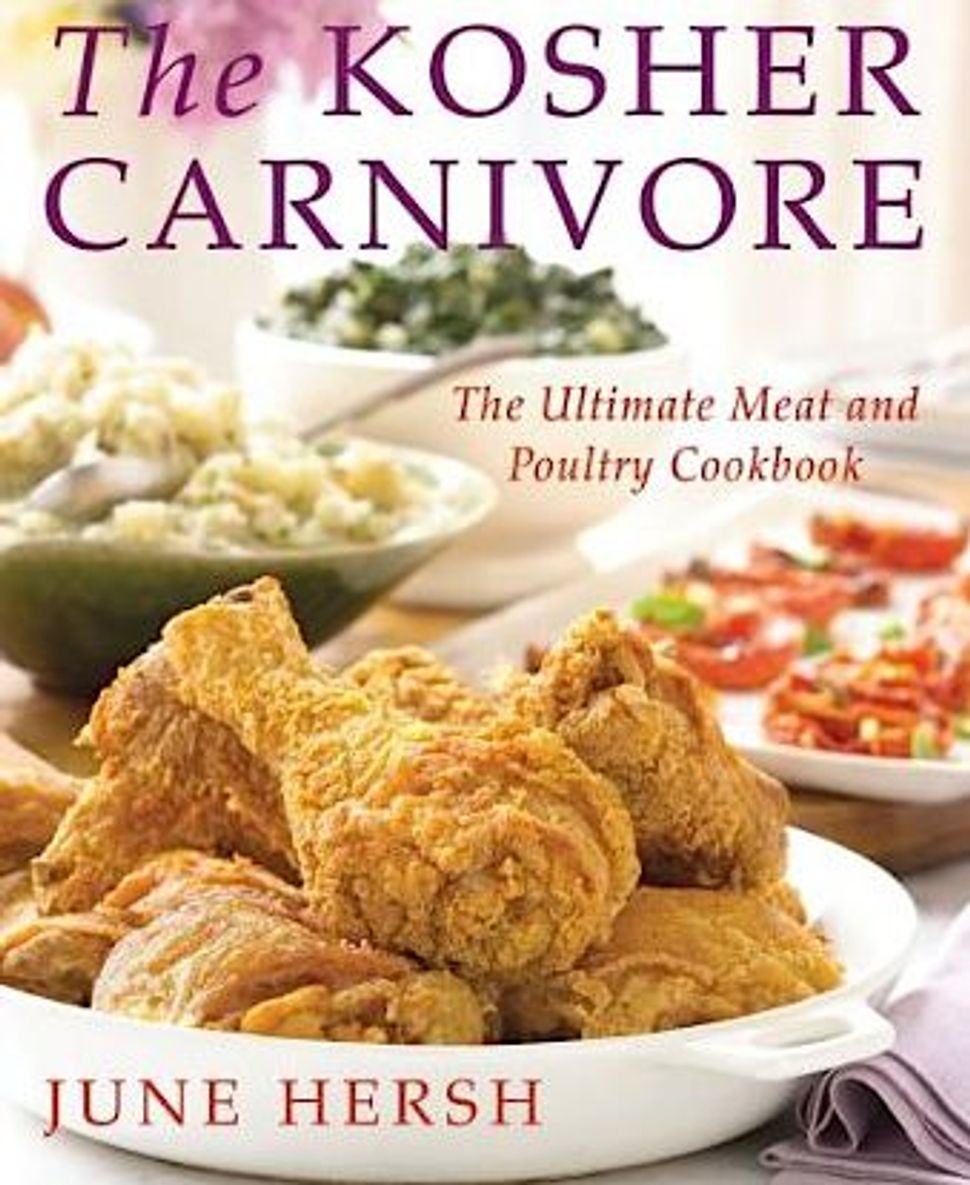 June Hersh is the author of “The Kosher Carnivore: The Ultimate Meat and Poultry Book,” available this week. Her posts are being featured this week on The Arty Semite courtesy of the Jewish Book Council and My Jewish Learning’s Author Blog Series. For more information on the series, please visit: 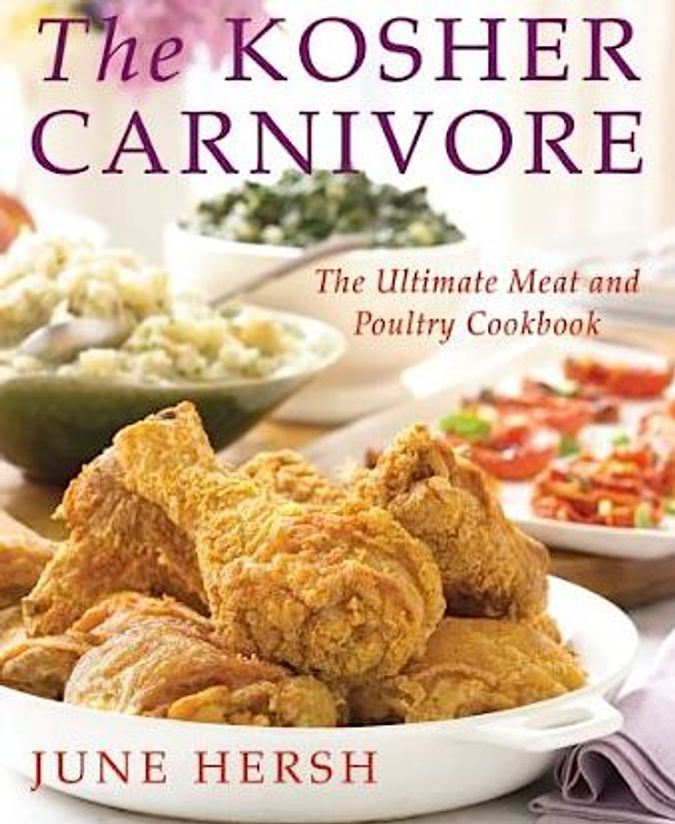 As a food writer you need to be prepared to answer just about any question tossed at you during a Q&A. I like to feel I know my subject matter inside and out, and I admit to late night Googling (that sounds x-rated) to research something I am not 100% certain of. While I should be dreaming of food, I am instead trying to unravel its mysteries. My obsession with information is justified as I have been asked if a free-range chicken is happier than its caged neighbor, or whether America’s fascination with hummus is a fad or here to stay. Understanding food is my job, and the better my understanding the more clearly I can communicate the power of food through the recipes I write. No query has kept me awake more nights then a question I was asked during a radio interview: What is Jewish food? Truth is, it’s a great question with no easy answer.

In my first book, “Recipes Remembered: A Celebration of Survival” I told the stories of Holocaust survivors and recreated their cherished recipes. No one would question that the kugel I tasted, the matzo ball soup I slurped and the brisket I devoured were Jewish foods. They have been eaten in every Jewish home, prepared in a myriad of ways and while ingredients and techniques vary, they definitely fall into the Jewish food arena.

My second book, “The Kosher Carnivore: The Ultimate Meat and Poultry Book,” was designed to be a departure from the typical Jewish cookbook, focusing on techniques and recipes that crossed borders and time-zones and appealed to both Jewish and non-Jewish cooks alike. Using a meaty cut of osso buco or a testosterone driven capon, I prepared what I consider to be eclectic but unexpected kosher food. Yet once the word kosher is involved in a book title, the perception is you are presenting Jewish food.

The real issue is how do we define Jewish food when we don’t have a specific country we can point to for culinary inspiration? It’s not as if Israeli food represents Jewish food, or that there is a country where Jewish food is the mainstay cuisine.

Consider this: We’ve been thrown out of all the best countries in the world, so we have incorporated in our cooking style the best of every culture’s culinary point of view. We have cleverly adapted or adopted cooking from regions we have found ourselves in and made those styles our own.

Additionally, we don’t have a cooking icon who defines our cuisine. Proud Americans can point to James Beard or Julia Child, Italian cooks marvel over Mario, or the British single out… OK bad example. There are many great chefs who happen to be Jewish but they are not celebrated for preparing what many consider Jewish food.

So what makes a food Jewish? Here’s my theory: I think that beef bourguignon is Jewish food when made by a woman who endured the Holocaust on the outskirts of Paris and learned to make this classic French dish for Rosh Hashanah dinner. I propose that the Sephardic meat cakes that I helped my grandmother make every Passover typify the ultimate Jewish food for my family. It is a dish I now make annually and one I hope will endure for years to come. I contend it’s watching your favorite aunt make her signature latkes and serving them every Hanukkah. And isn’t that what makes a food truly Jewish? It is the process of learning to make that dish with someone you love, it is the hope that dish will find a legacy, it is the association of that food with a family gathering. It is an indefinable cuisine with tradition being the main ingredient.

Some scholars maintain that matzo is the only true Jewish food. And who with any culinary pride or pedigree would want to lay claim to that? As far as I know there are no restaurants called “Matzo and More” or “Mostly Matzo.” So, in our search for a Jewish restaurant, is our local deli the only fix for traditional Jewish fixings?

Absolutely not. You don’t need to be Sherlock Holmes to detect the ubiquitous Jewish dishes disguised in many of today’s trendiest restaurants. Visit the newest three-star eatery where the decibel level is only exceeded by the number of young things stacked at the bar. Order the toasted buckwheat with farfalle and smile, because you’re eating kasha varnishkes. Try the paper-thin dumplings stuffed with beef and onions and understand they are kreplach answering to another name. Care to cool off with chilled roasted beet soup? That’s borscht in my book. And when you order biscotti for dessert, remember, twice baked mandel bread is biscotti’s Jewish cousin with less effective PR.

And what about buzz words like locavore and organic, which might seem new and flashy? Jewish cooks were organic locavores long before the terms became fashionable. They knew that if it grew in your backyard or was raised on the farm next door, it was dinner. These cooks can prepare cabbage a hundred different ways and manage to nuance sweet and sour so that your tongue delights like a choreographed dance. In writing and researching both books, it struck me that the more we move forward in our food trends the closer we get to the Jewish food our grandparents prepared. If we ate like 85-year-old Polish peasants, we could skip the occasional spin class, lighten up on the energy bars and enjoy a shot of schnapps a little more often.

Tonight when I am awake at a time I should be asleep and I am tempted to Google some obscure food, I should turn off the light, shut down the computer and be contented that I am satisfied with my answer to the question “what is Jewish food?” It is not limited by region, not constrained by ingredients, and never short on love and tradition. It might be difficult to define, hard to categorize or even digest. But, it is the food that has always nurtured and nourished us, and is happily enjoying a spirited revival in the hands of a new generation of Jewish cooks.

This dish, which has its roots in Milan, is braised in wine and aromatics and served over saffron scented rice. Osso Buco actually translates to mean, “hole bone,” alluding to the rich melt-in-your-mouth marrow contained in the center. Be sure to provide small forks or little knives to coax out the soft delicacy. This recipe calls for a dash of balsamic vinegar and the option of adding olives and anchovies to give the dish a little extra intrigue. The gremolata topping is optional, but lends a vibrant note when spooned over the veal.

Behind the Counter Have your butcher cut the shanks into 2 ½- to 3-inch pieces (about10 ounces each). Ask your butcher to tie kitchen twine around the outside of the meat, as if cinching the shank with a belt at the waist, so that it does not fall off the bone when cooking.

Alternate cuts: There is no exact substitute that will produce the same dish, but you can use the sesame ingredients and method to prepare veal spare ribs (-$) or lamb shanks (-$).

Preheat the oven to 325 degrees. Heat the oil in a braising pot. Pat the veal dry, and dredge the veal in the seasoned flour. Brown the veal on both sides, over medium–high heat, until a nice brown crust forms on each piece. Remove the veal to a plate. In the same pot, cook the carrots and onions over medium heat, until lightly brown, about 5 minutes. Add the smashed garlic, and the olives and anchovies if using, and cook 5 minutes longer. Pour the wine and vinegar into the pot, scraping up any bits that collected on the bottom and cook until the liquid is reduced by half, about 10 minutes. Place the veal back into the pot, along with any liquid that collected on the plate. Add the tomatoes and stock. The liquids shouldn’t drown the meat; the top portion of each shank should show. Nestle the bouquet garni in the sauce. Cover and cook at 325 degrees for 1 ½ to 2 hours, until the meat is very tender.

Prepare the gremolata, by combining all the ingredients, reserve. When the meat is finished cooking, carefully remove the meat and vegetables from the pot with a slotted spoon. Remove and discard the bouquet garni and bring the sauce to a slow boil. To thicken the sauce, create a slurry by mixing 2 teaspoons of cornstarch with 4 teaspoons of water, stir back into the pot,heat and repeat if necessary. Season to taste with salt and pepper. Spoon the sauce over the veal (remove the string) and top each serving with a generous pinch of gremolata.

Osso Buco and rice Milanese have enjoyed a long marriage. Preparing rice Milanese is as easy as making boiled rice, with the addition of golden saffron threads, which add the mellow yellow color and a burst of flavor. This precious spice comes from the dried stigma of a saffron crocus and by weight is the most expensive spice in the world. You only need a pinch to impart its distinctive taste and distinguishing color. Prepare your white rice as directed on the package and add a pinch of saffron to the cooking liquid. If you replace the water with chicken or vegetable stock, the flavor will be even more amplified.

Check back all week for more posts and recipes from June Hersh.

Unraveling the Mystery of Jewish Food