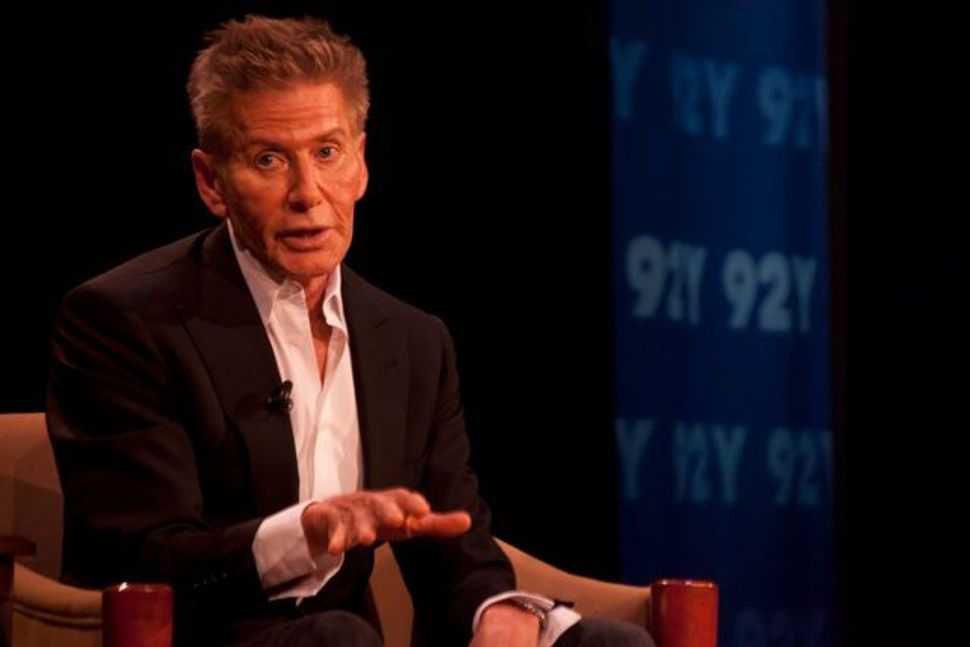 Forget designer showrooms in the Garment District, modish stores on Madison Avenue, and the latest haute couture from Paris. The stylish place to be last night was at the 92nd Street Y to hear Calvin Klein speak.

Most know the Jewish fashion designer as a name on a fragrance bottle or a logo emblazoned on a pair of jeans. But yesterday, an audience got to hear from the designer himself, as Klein sat down with New York Fashion Week founder Fern Mallis for a discussion about his life and career.

The evening opened with a short film showing images of Calvin Klein designs, models and ad campaigns in rapid succession: Celebrities such as Kate Moss, Mark Wahlberg and Brooke Shields could each be seen.

Afterward, Klein took center stage, talking candidly about his family: He was born Richard Klein to Jewish-Hungarian immigrants in the Bronx in 1942, and his grandfather had been a dressmaker.

When the name of Ralph Lauren, another mega-designer who was raised in the same immigrant community, came up, Klein coyly remarked that Lauren was “a little older” than he was.

Sketching designs from a young age, Klein said he always knew he wanted to attend Manhattan’s High School of Art and Design. When he once wandered off of his career path, it was his father who pushed him back on track. The elder Klein said, “You know, I never really understood exactly what you’ve been studying all these years, but I have a feeling if you don’t see it through, you’ll be unhappy all your life.”

Klein spoke of his humble beginnings as a designer, telling how early on in his career, he opened a tiny showroom with three coats and four dresses in what was then the York Hotel. One day, the general merchandise manager of the department store Bonwit Teller showed up at the show room and asked Klein to bring his clothing to the store’s offices. The rest is history.

Other interesting details emerged during the interview. Klein said that he named Eternity perfume after a ring band sold at the Duke of Windsor’s estate sale.

He spoke of his role as a pioneer in using sizzling billboards to sell clothing, as well as his being the first to place ads longer than two-page spreads in magazines (“I had more to say,” Klein explained). He was with lensman Bruce Weber in New Mexico at the home of painter Georgia O’Keeffe when they worked on one such spread.

Klein said one of the reasons he became interested in designing jeans was that he “liked the idea of reaching a lot of people.” He also admitted he still wears his namesake underwear, but that he wears others, too. As he put it: “I still want to check out the competition.”