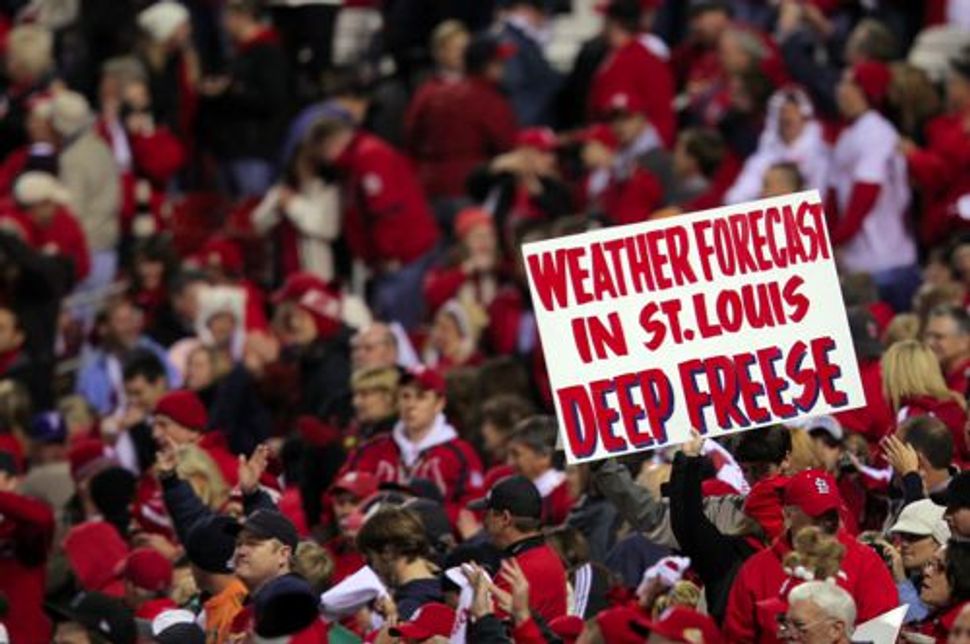 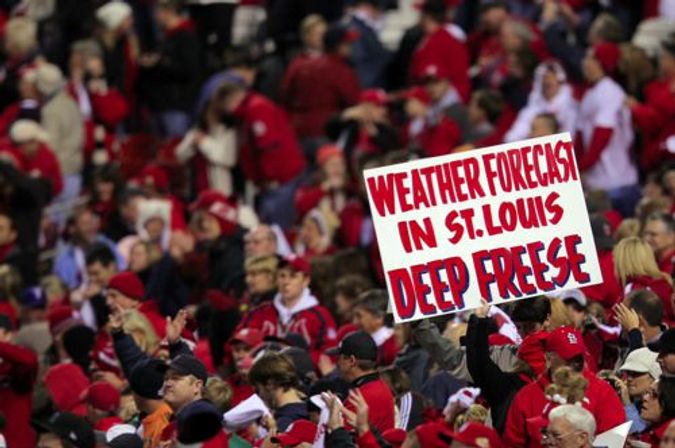 Baseball is a religion for fans in St. Louis, and Facebook and Twitter were abuzz within minutes of the win. “Friday night oneg at Momo’s anyone?” wrote one member of Cardinal Nation, referring to a tavern situated in the heart of University City’s religious Jewish enclave and across the street from a synagogue. “Need a heter to watch game 7 tomorrow,” said another. “I’m taping it — and nobody in shul better tell me what happened,” wrote a fan who lives out of town.

During the playoffs, which coincided with the holiday of Sukkot, local fans responded by surreptitiously leaving radios on or putting television sets on timers. Other fans roamed the neighborhood to see if they might catch a glimpse of the score through someone’s open window.

The conflict crept up on Sabbath observers this week, when rain forced Game 6 to be postponed until Thursday. (Coincidentally, the same happened in 2006, the last time the Cardinals won the World Series.) This time, there almost wasn’t a Game 7, until the Cards clinched it in 11th inning.

“It was the greatest baseball game I’ve ever seen live and one of the greatest games, period,” said Michael Oberlander, a St. Louis attorney who was at Game 6 with his wife and two sons. On the train ride home, the family mulled the conflict of Game 7. “It’s a disappointment in a sense that there was rain and it pushed off the game,” Oberlander said.

Despite being “huge fans,” he said, the family won’t watch. “I came back to, I’m going to enjoy Shabbat with my family. We’re going to sit at the table and talk about the parsha, sing zemirot and then go to sleep and get the paper in the morning and find out what happened.”

Daniel Lefton, a lifelong Cards fan whose four sons have followed in his footsteps, said as much as he loves baseball, he plans to DVR the game and watch Saturday night. “If somebody happens to be walking their dog in front of our house tonight, we’ll stick our head out and ask for an update,” he said. “We probably will not go to sleep tonight without somehow finding out the score from a passerby or from the honking on the street.”