Behind the Scenes: ‘Footnote’ Pre-Oscar Party 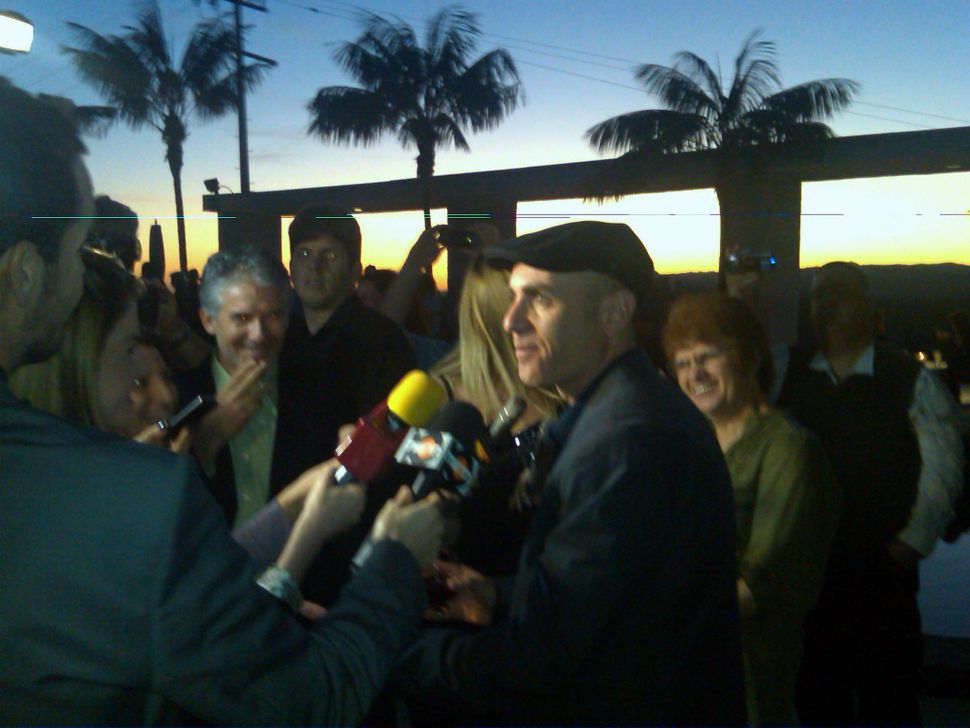 The comic drama, about a pair of father-and-son Talmudic scholars, snagged Israel its 10th Academy Award nomination in the category and, Lerner hopes, the nation’s first win when Oscars are handed out Sunday night.

Sponsored by the Israeli Consulate and L.A.’s upcoming 26th Israel Film Festival, the festivities were hosted by Shanit Schwartz and her husband, Sam, a talent agent whose stable boasts many of film and TV’s top musical composers. Guests entering the Schwartz’s art-filled villa emerged onto a hilltop with sunset views toward the distant Channel Islands and, just across the way, the $30 million driveway (yes, driveway) that leads to the home of Sam and Shanit’s neighbor, Microsoft mogul Paul Allen.

Undaunted by the Hollywood glitz, “Footnote” writer and director Joseph Cedar told the Forward that he was pleased to be attending his second Academy Award ceremony (his first was for “Beaufort” in 2007), but expressed some anxiety; with two nominations for and four Academy submissions by Israel, perhaps his popularity meant he was not “edgy” enough. Michael Barker, co-president and co-founder of Sony Pictures Classics, the film’s US distributor, assured the filmmaker that frequent nominations were a good thing, pointing as an example to Woody Allen, a 23-time nominee (and three-time Oscar winner) in various categories. Cedar perked up when he learned that Allen was going to screen “Footnote” privately before the film’s March 9 opening in New York.

Sony Pictures Classics, which over the years has won 11 Best Foreign Language Film Oscars, is also pushing two other nominees vying with Footnote in the category, including the Iranian entry, “A Separation,” and “In Darkness,” a Polish film about the Holocaust. Barker told the Forward that he believes that “Footnote” has “crossover potential” and that Sony’s aggressive publicity campaign and screening schedule on both coasts for Academy members is a post-Awards release strategy aimed not only at winning the Oscar, but at maximizing the film’s appeal to mainstream audiences.

Also on hand were Meir Fenigstein, director of the Israel Film Festival; Consul General David Siegel, who has seen the film twice; the film’s producers David Mandil, Moshe Edery and Leon Edery; and Footnote star Shlomo Bar-Aba. Said Siegel, “Whatever is in that envelope Sunday night, Israel has already won.” Bar-Aba, who captured the Israel Film & TV Academy’s Ophir Award for Best Actor for his role as Eliezer Shkolnik, the elder Talmudic scholar in the picture, summed up the whole thing in Hebrew slang, “It’s a sha’arruriya,” scandalously too good to be true.

Behind the Scenes: ‘Footnote’ Pre-Oscar Party