When Susan Seidelman released her first film, “Smithereens,” in 1982, she was still among the first female Hollywood directors. The film was a success, and was selected for competition at Cannes. She followed that with “Desperately Seeking Susan,” which featured a very young Madonna, some films that failed to gain traction (“Cookie,” “She Devil”) and more recently, “Boynton Beach Club.” 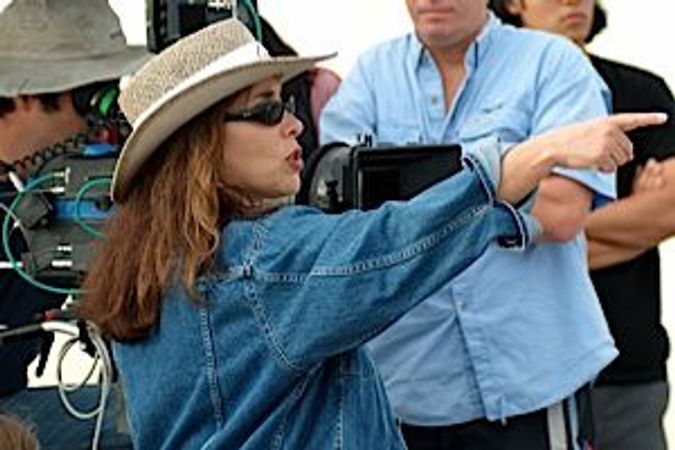 Seidelman’s new project is “Musical Chairs,” an inspiring film about how the human spirit can overcome the worst tragedies. The movie tells the story of a dance instructor who is partially paralyzed in a car accident just before an important competition. Ultimately, she reclaims her life and finds love, in part thanks to a wheelchair dance tournament. The film opened this week in New York and Florida, and March 30 in Los Angeles and Chicago.

Seidelman, 59, spoke to The Arty Semite about her new film, her career, and her mom, who wrote the first draft of “Boynton Beach Club.”

Curt Schleier: Is there a story behind “Musical Chairs”?

Susan Seidelman: The project was developed by a producer, Janet Carrus, who had two coinciding interests. She is a competitive ballroom dancer and is also involved in charitable work at a facility for people who have severe physical disabilities. She started a music and movement dance program there. I got the script a year-and-a half ago. I watch “Dancing With the Stars,” but had never hard of wheelchair ballroom dancing. I found it a pretty amazing art form and that’s what initially interested me. They have some competitions in Europe, but not here in the United States.

Is there a common thread to your films?

If you go back to “Desperately Seeking Susan” or “Boynton Beach Club” there is a theme about how we all have inner desires we keep hidden inside, and we have to be brave enough to let them out. In “Susan,” it was a bored suburban housewife who wanted her other side, represented by Madonna, to come put. In “Boynton Beach,” it was a group of senior citizens who weren’t ready to give up their romantic aspirations. In “Musical Chairs,” it’s about people who have obvious physical disabilities you would think limit their bodies, when dance is all about the freedom to move their bodies.

After “Susan” you went through a rough career period. How did you handle that?

My mother once said to me, “When you’re riding high, don’t let it go to your head. When you’re not riding so high, don’t let it go to your heart.” I think that’s very wise. In the beginning, when I was riding unexpectedly high, it was great; but it never changed me. I didn’t buy a mansion in Beverly Hills or change my friends. I just enjoyed it and didn’t let it change who I am. You’ve got to ride with it during the bad times. I’ve been doing this for 30 years. I like the process. I like earning my living doing something I love.

You mention your mother, Florence. She’s the one who gave you the idea for “Boynton Beach Club,” right?

She and my dad were friends with one of her best friends from high school and her husband. When my mom’s best friend passed away, her husband was a widower who suddenly found women in his community circling around him. He started to tell my mom about the experiences he was going through as a single guy being approached by women for friendship and romance. She used to call me from time to time with ideas she thought would make good films. When she suggested people of a certain age who find themselves back in the dating game, it struck me as a really good idea that hasn’t been explored much in mainstream Hollywood movies. She wanted to take a stab at writing the script. So she went out and bought a copy of Screenwriting for Dummies. She didn’t talk about it for a few months and one day I got a packet in the mail containing her draft of the script. It was really rough and structurally a mess, so I asked her if she would mind if I rewrote it. “Boynton Beach Club” was the result.

Can you talk a little bit about growing up?

I grew up in Philadelphia, and when I was 10 or 11 we moved to a suburb called Abington. I didn’t come from a religious family, but I came from a family that had a very strong Jewish sense of humor. My dad had a way of looking at life with a sense of irony I always considered Jewish. We celebrated the holidays, Passover, Hanukkah, Yom Kippur, and was confirmed at age 13. Back then it was fairly unusual for a girl to have a bat mitzvah, though my younger sister was a bat mitzvah. My sense of Judaism comes more from a cultural than religious point of view. I went to Israel and lived on a kibbutz for a couple of months. I wanted to get in touch with my roots, so I learned a little Hebrew — which I can’t speak anymore — and picked grapefruits.

Does your Judaism inform your films?

Most of my films have, if not outwardly, Jewish characters. Without saying so, I always thought of Gary and Roberta Glass [from “Susan”] as Jewish. Certainly the characters in Boynton, if they’re not outwardly Jewish, if you go to Boynton, it’s all Jewish.

Watch the trailer for ‘Musical Chairs’: