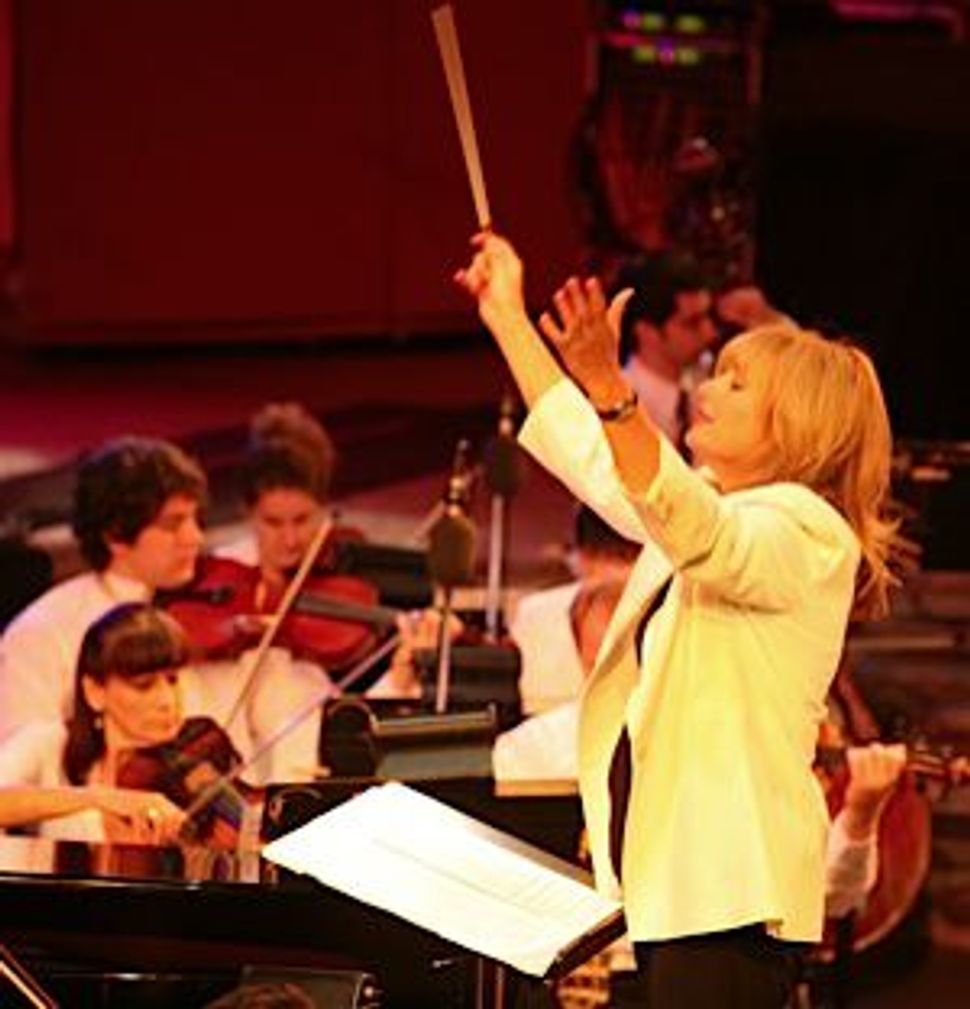 Image by Courtesy of LAJS

The Los Angeles Jewish Symphony is celebrating its 18th anniversary this year with a series of live performances, beginning with a March 31 concert at Valley Beth Shalom, in the San Fernando Valley. The “Istoria Judia — La Convivencia Musical” concert concentrated on Morocco’s Sephardic tradition and commemorated the 1492 expulsion of Jews from Spain. On June 23 LAJS is partnering for the fifth year with non-profit concert producer Kindred Spirits for a performance at the Walt Disney Concert Hall to benefit the anti-genocide organization Jewish World Watch. LAJS’s anniversary finale takes place at Hollywood’s John Anson Ford Amphitheatre on August 26.

Noreen Green is the co-founder, artistic director and conductor of LAJS. She calls LAJS “the wandering Jewish orchestra,” because it doesn’t have a permanent home, and performs at venues throughout LA. LAJS presents up to four concerts each year, as well as smaller chamber music events. The Arty Semite talked with Green about the LAJS at 18, defining Jewish music and commissioning new works.

Ed Rampell: What is the Los Angeles Jewish Symphony?

Noreen Green: It’s a symphony devoted to playing the music of the Jewish experience. The Symphony’s principal players and soloists are Jewish, as are about 30% of its musicians.

What do you consider to be “music of the Jewish experience”?

It is a symphony, so I select music based on repertoire that fits into the symphonic genre. We also perform with choir and soloists. I guess the question always is, “What is Jewish music?” They say, “Is it by a Jewish composer? Is it based on Torah trop (cantillation)? Is it klezmer?” It’s everything, because composers are influenced by their life, their growing up, if they went to Hebrew school and if they went to Passover Seder.

Take Aaron Copland — is he a Jewish composer? He didn’t really write Jewish music, he wrote American music. But he grew up Jewish and he actually did write one chamber piece for violin, cello and piano, called “Vitebsk,” based on Jewish themes. Then there’s somebody like Leonard Bernstein, who obviously wrote Jewish music — the “Jeremiah” symphony, “Kaddish.” There are the obvious composers, then there’s the less obvious, like Darius Milhaud. The first line of his biography says, “I am a Jew from Provence.”

What have been some LAJS shows that are emblematic of Jewish music?

Every concert I put on has a theme… such as “Cinema Judaica,” which was film music-themed; “Gesher L’Chayim,” which translates as “Bridge to Life,” which was music that survived the Holocaust. One of the programs I’m proudest of was “Women of Valor.” I feel very strongly that it’s important to inspire the creation of new works, and as a woman conductor I’ve focused on commissioning women to write music on Jewish themes. “Women of Valor” was an oratorio by Andrea Clearfield about 10 biblical women.

What is special about this anniversary?

Eighteen years — obviously, Chai is very meaningful. For a specialized orchestra to have survived in this world for 18 years is really amazing… especially given the economy. We’ve gotten grant money everywhere from the National Endowment for the Arts to LA County Arts Commission to LA’s Department of Cultural Affairs to private organizations. We felt it was quite a milestone so we wanted to celebrate our Chai year.