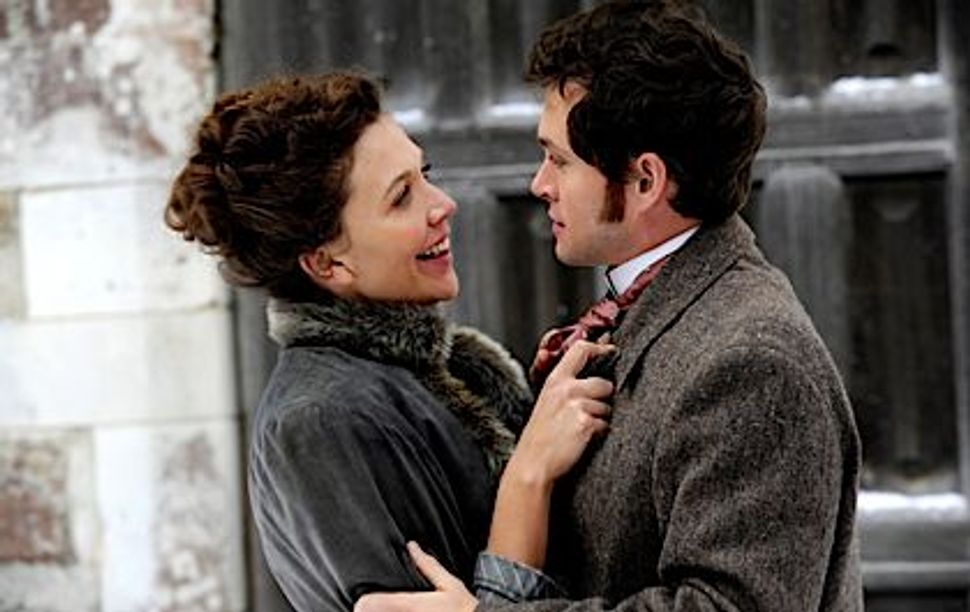 Maggie Gyllenhaal is no stranger to playing strong, confident women. The Academy Award-nominated actress has played roles ranging from a journalist and single mom in “Crazy Heart” to a liberal and outspoken academic in “Mona Lisa Smile.” Her latest film, “Hysteria,” which opens May 18, is set in London during the Victorian era, when various female “afflictions” — melancholia, frigidity and nymphomania among them — were bunched together and labeled “hysteria.” The supposed cause: a disorder of the uterus. The preferred treatment: “manual stimulation” of the womb.

In the film, Dr. Mortimer Granville (Hugh Dancy) joins the practice of a “hysteria” specialist, Robert Dalrymple (Jonathan Pryce). Granville becomes engaged to the very proper Dalrymple daughter, Emily (Felicity Jones). But what good film is without conflict? Granville falls for Emily’s sister, Charlotte (Gyllenhaal), a firebrand progressive fighter for women’s rights. Gyllenhaal spoke to The Arty Semite by phone about the strong women in her life, eating Jewish deli on Christmas and attending her first Orthodox Seder.

Curt Schleier: Tell me a little about your background.

Maggie Gyllenhaal: My father [director Stephen Gyllenhaal] was raised in the Swedenborgian religion — kind of a Christian mystic religion — and he grew up in a small Pennsylvania town. My mother [screenwriter Naomi Gyllenhaal] is Jewish and grew up in Brooklyn.

I just participated in the [TV] program “Finding Your Roots,” so I have a vey accurate and informed family history. On my mom’s side, it was exactly what I thought. They were peasants in Russia, and when my great-grandfather was drafted into the Russian army, which was a dangerous thing for a Jew, they left. First they went to Lithuania, then they came [to New York City] and lived on the Lower East Side, where my great-grandfather was a tailor. My dad left the religious town and put that all behind him. He… left that part of my upbringing to my mother. So I grew up mostly Jewish, culturally. How I eat, a lot of the way I think, comes from my mother, because my mother values that part of herself in a way that my father didn’t.

Did you celebrate the holidays?

We did, and we still do, though it was always pretty reformed. I never went to Hebrew school, and I was never bat mitzvahed. During our Seders, we used to have this really hippie Haggadah about oppression all over the world… I went to a friend’s house for Passover last year. She is Orthodox, but also a hip young woman. She lives in L.A. and is a make-up artist and clothing designer, and her husband is a comedian and director, and they take their religion very seriously. I cried all the way through [the Seder]. It moved me so much. I think for the first time as an adult, I listened to the Seder and the Exodus being talked about and explained. I watched their children ask the Four Questions in a way that showed they clearly understood the meaning.

You had some very accomplished ancestors, including your grandmother and her two sisters. Were they an inspiration for you?

Yes. My grandmother was a pediatrician, and her sister, who is my great-aunt, was a lawyer and a judge. The other sister was an opera singer. They were first generation, and, probably because their parents were immigrants, there was a different kind of pressure to succeed. I never knew my grandmother, but I was close to my great-aunt Frieda, who was the lawyer. I think it’s kind of amazing that all three of these women so long ago were able to be as successful as they were. My mom is also interesting and smart. She’s a writer in her 60s and just about to direct her first movie and is very politically active.

You’re married to Peter Sarsgaard, who is Catholic. I understand you celebrate Christmas — but with Jewish food.

Every Christmas, I order food from [the Manhattan deli] Russ & Daughters.… It’s the best place in New York to get smoked fish. I get pickles and herring and all those traditional Jewish foods. All those things [that]I remember and come from my mom’s side. When I go in there — and I’m a regular — the way we [Gyllenhaal and the store staff] talk, I can sort of imagine it’s 60 years ago and I’m a Jewish housewife doing my shopping. It’s not all I am, but I do value that part of me.

Watch the trailer for ‘Hysteria’: