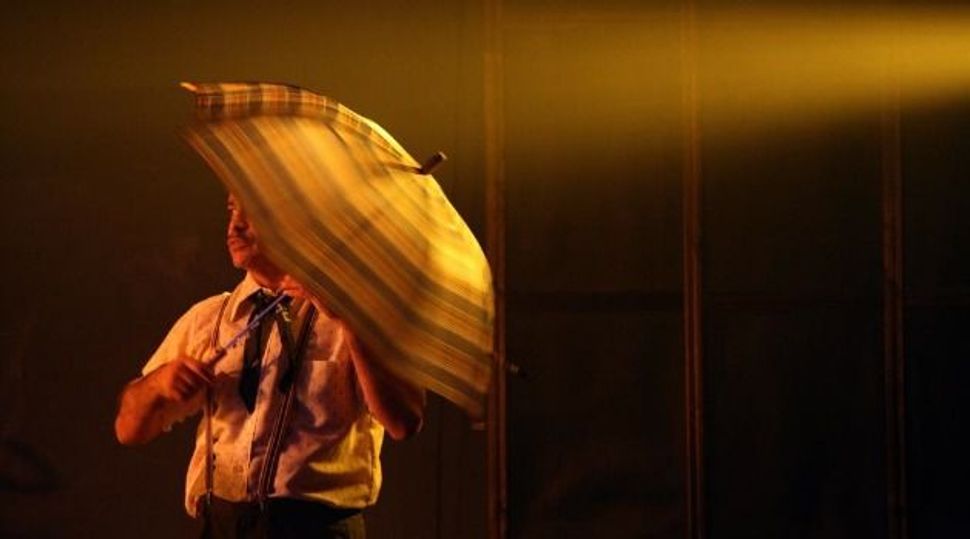 Image by Courtesy of Nalag’at Center

As the audience files into NYU’s Skirball Center the deaf-blind actors are already on stage kneading dough. Throughout “Not by Bread Alone,” they are preparing bread for themselves and theatergoers who at the end of the performance will join the actors on stage and share the bread with them. Interspersed with the preparation—and as the sweet smell of baking fills the house — relationships between bakers are explored, daily life is lived, and dreams revealed.

A few of the actors speak, but mostly they communicate with each other through touch sign language and “translators,” who help with inter-communication, while serving as guides, steering the actors across the stage.

The 11 performers who comprise Tel Aviv’s Nalag’at (meaning “do touch”) are afflicted with Usher Syndrome, meaning they were born deaf or became deaf shortly thereafter and ultimately went blind. During its 13 year existence the company has garnered an international reputation for its ground-breaking theater that has unwittingly forged a new theatrical language. The current New York production marks the company’s American debut.

Founder and artistic director Adina Tal does not allow her troupe to perform in theater festivals that present and celebrate the work of physically or mentally challenged actors. If the latter are producing terrific theater, that’s fine. But disability in and of itself is no bond as far as she’s concerned.

The Swiss-born theater artist who moved to Israel when she was 20 says she never envisioned herself creating a theater of this nature. Indeed, when Tal was invited by social workers to do a three-month workshop with a group of unemployed and profoundly isolated adults who suffered from the horrible condition, she was less than enthusiastic.

Fast forward: Under Tal’s leadership the company has created several shows and has performed in London, South Korea and Copenhagen. In 2007 Tal founded the Nalaga’at Center, which houses the theater and has played host to more than 200,000 visitors from Israel and abroad. The center also serves as training ground for deaf-blind actors and as a meeting place where the deaf, blind, deaf-blind, and general public can interact as equals.

Tal told the Forward’s Simi Horwitz that, despite her initial reluctance to get involved at all, “when I realized there was no deaf-blind theater company in the world — and I had the chance to create something that no one has ever done before — I saw it as a gift and a privilege.”

Simi Horwitz: When you launched that first workshop, how did you communicate? What was it like?

Adina Tal: When I walked into the room it was as if I didn’t exist. I was very confused. I was given a cup of coffee and was happy to have something to do with my hands. I put the cup on the floor, hoping they would feel the vibration. They didn’t. Yet finally with the help of the translators I got everyone to sit in a circle to hold hands and then squeeze hands. That took hours.

Ultimately, how did they respond to you?

They were surprised at how demanding I was, but they loved that. We worked for three months and we created a pantomime. I felt I had done a great job. But then one of the actors said, “I think that what we’re doing is really stupid. What is this with pantomime?” I said, “It’s not verbal. What do you want to do?” He’s a Russian immigrant—and they’re cultural snobs, you know—and he said, “I want to do Pushkin, the Russian writer.” And I said, “How are we going to do that?” And he said, “This is not my problem. You’re the director.” And, I said, “Okay, it’s my problem because I’m the director. But it’s your problem because you’re deaf and blind. And you’ll have to find a way to speak. Will you do it through your elbows, your neck?” Look, deaf-blind actors are not like other actors.

How are they different?

They have a different way of expressing themselves because of their isolation of darkness and silence. Being deaf-blind is a very important part of who they are and they need to work from there. Regular actors can do better Shakespeare or Brecht. But no other actors can do what they do.

Could you give me an example of how you work differently?

Yes, we work with a lot of drums. Obviously, the actors can’t hear them or see hands going down on the drums and in the beginning they all got very angry. “We can’t hear and we can’t see.” But I insisted and we worked on this for half a year. Now they feel the vibration of the drum and we use the drum beat as a cue. It’s interesting that a little thing like a drum beat is a new door to the outside world.

It must be very difficult to forge a show collectively with deaf-blind actors.

Are the actors communicating in Hebrew sign [touch] language?

Is Arabic sign language ever used by actors in your troupes?

No, because Arab deaf people who grow up in Israel learn Hebrew sign language, though Arabic sign language exists.

On some level do the translators become actors on stage?

Yes. Besides translating, it’s their job to make the movement on stage look good and respectful, as if they’re leading a king or queen.

How do you convey audience response to the actors?

The translators convey applause to the actors by tapping on their shoulders or hands. And with “Bread Alone,” there’s another connection to the audience. The play takes place in real time. I felt it was important to create a common time frame. If you’re deaf-blind you have no feeling of the present [because you can’t hear or see], but that changes with the kneading of the bread, the smell of the baking bread and then the audience coming up on stage to eat the bread and interact with the actors.

Who is your intended audience?

It is for a general audience interested in good theater. Two revolutions have taken place here. The first is that deaf-blind actors are standing on stage in a theater. The second is the change in the audience. In the beginning, I had to force people to come. They said, “Why should I come to see deaf-blind people? I have my own problems.” And when they finally came they asked if paying for a ticket was tax deductable. I said, “No. If you go to a Broadway show, is that tax deductable?” It’s interesting because after they were in the theater 15 minutes, you could feel their discomfort. They believed they had come to a deaf-blind show as an act of charity, to give something. Instead, they found that we were giving them something: a beautiful show. That was a big step. The actors have become stars, which is another revolution. Before, we created our theater many thought about committing suicide. They accepted being deaf, but going blind was too much.

Do responses to your productions vary with geography and culture?

It can touch anyone. We have people from all over the world visiting us in Israel, though American audiences are especially warm and responsive and give standing ovations. But sometimes we’re surprised by a response. When we performed “Not by Bread Alone” in South Korea we were afraid that there’d be no cultural connection. We worried that the people are shy and would not come up on stage at the end. It took place in a huge theater that seats approximately 1,000. At the end, more than 800 people were running up on stage. It was incredible. We used the translators to keep them from over-running the stage.

Have you performed in hot spots, such as the West Bank or in countries that are hostile to Israel?

No and it’s a real dream. My initial dream was to have deaf-blind performers from the West Bank as part of the company. Unfortunately, it’s very complicated on both sides and it has not yet happened. Our center really is an island of sanity. We work with Jews, Muslims, Christians, and Samaritans. We have to change reality. That will be the next stage of our revolution.

Do you think it’s revealing that this new theater was created in Israel?

I’ve been thinking about that. It’s a difficult country and getting more difficult. I often feel we’re up against a wall and forced to open doors. And that’s true for our theater work too. We come to a wall and don’t know how to continue and that’s when we decide that walls are there for us to create doors. And there’s another element. It’s deeply rooted in Jewish culture that the Messiah has not yet come. Christians have their Messiah. For them the circle is closed. For Judaism, there is yearning, dreaming, and wanting. I work from that point of view and I’m not waiting for the Messiah.

SImi Horwitz writes about theater frequently for the Forward.