101 Years of the Maxwell House Haggadah 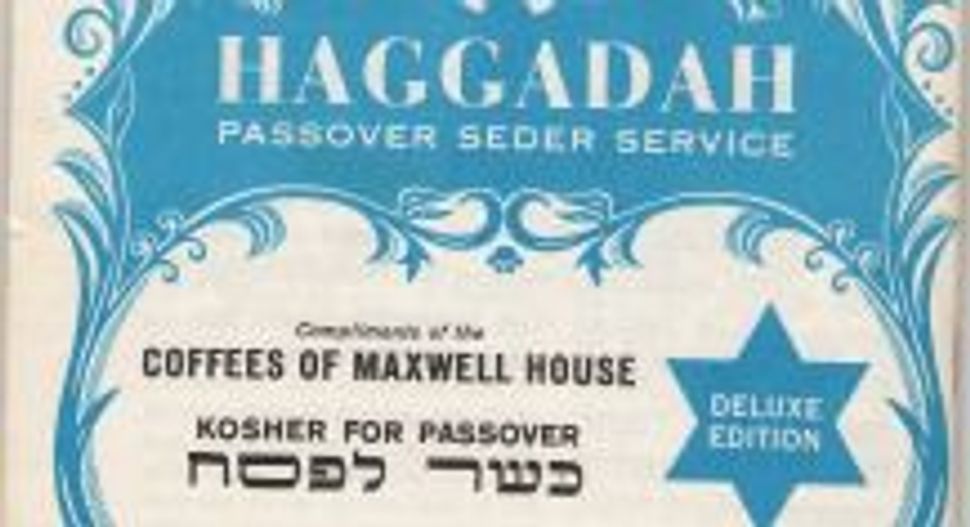 If you’ve been to a Seder in the United States some time in the last 80 years, you’ve probably come across the Maxwell House Haggadah.

The iconic blue cover and dual-column Hebrew and English translations have arguably become almost as emblematic of the holiday as the Seder plate and Elijah’s cup among Jews of the Diaspora. It has appeared in the suitcases of Soviet immigrants bound for Israel, been carried onto every battlefield the US military has fought on since 1933, and been the guest of honor at the Obamas’ White House Seder.

The Maxwell House Haggadah owes its existence to the Joseph Jacobs, a former advertising manager for the Forverts who started the Joseph Jacobs Advertising agency in 1919, which specialized in selling ads for Jewish publications. In 1923, Jacobs convinced Maxwell House Coffee, then owned by the Cheek Neal Coffee Co. out of Tennessee (it’s now owned by Kraft Foods, Inc.), to invest in an advertising campaign targeting Jewish consumers.

Until then, the coffee bean had been seen as a legume, a bean not kosher for Passover. “Jewish grocery stores would put away coffee with the chametz under the incorrect assumption that coffee beans were kitniyot when in fact they are technically a fruit not a bean in that sense,” explained Elie Rosenfeld, CEO of Joseph Jacobs Advertising.

To spread the word, Jacobs had an obscure Lower East Side rabbi certify that coffee beans were an acceptable post-Seder treat. To drive the point home, he placed an ad in the Forverts, announcing to all Yiddish speakers that Maxwell House Coffee was Kosher L’Pesach, or kosher for Passover (see original ad below).

Nearly 10 years later, in 1932, the Maxwell House Haggadah was born. It has been printed continuously since that time, handed out for free in supermarkets — though according to Carole B. Balin, professor of Jewish History at Hebrew Union College, that part is somewhat of a myth. “It was supposed to be buy one get one free. You bought one can of Maxwell House Coffee and got a haggadah in exchange,” she explained.

Based on the honor system, the two-for-one idea might have fallen by the wayside. “I don’t think 50 million cans of coffee were sold, let’s just put it that way,” Balin said.

Nonetheless, the product took off. For Jeffrey S. Gurock, Libby M. Klaperman professor of Jewish History at Yeshiva University, Maxwell House Haggadah is as much a consumer story as it is a Jewish one. “This Haggadah is maybe the best example of the melding of American entrepreneurship and Jewish tradition,” Gurock said. “That’s what my parents and grandparents used, even though it was a consumer product put out by a non-Jewish company.”

By 2006, Balin said, over 50 million copies of the Maxwell House Haggadah had been printed and distributed in Jewish households in America, and around the world. In 2012 alone, Rosenfeld said, the agency printed over a million copies.

In 1999, the Joseph Jacobs Advertising conducted a “pantry study,” in the context of which employees knocked on doors in 13 counties in the metro New York area, and surveyed participants on 6-15 product categories. Maxwell House and other products traditionally marketed to Jews — like Hellman’s mayonnaise, Breakstone’s sour cream, and Hershey’s — had “penetrated Jewish homes at double the rate of non-Jewish homes,” Balin said.

“Jacobs persuaded mainstream advertisers like Kraft, Colgate-Palmolive, and Quaker Oats to see the Jewish press as a viable marketing medium for their productsm,” Balin added. “The kinds of products my mother had in the home were the ones marketed by the Joseph Jacobs marketing industry: Miracle whip, Hydrox cookies, and Maxwell House Coffee.”

Maxwell House is by no means the only brand to have produced a haggadah. So how to account for its lasting success? For Balin, there are three main reasons that explain why the Maxwell House edition has endured.

First, she said, there was a need. “There was a tremendous interest in the Passover seder among American Jews, which required some kind of script to play out the drama. And there it was.”

Until then, the Passover service was a largely based on traditions passed down within the community. “Local custom ruled liturgy,”Rabbi Burton L. Visotsky, a Jewish Theological Seminary professor told Moment Magazine in 2009. “Maxwell House did more to codify Jewish liturgy than any force in history.”

Second, Balin added, it was available. Finally, she said, the layout and text was user friendly for a generation of largely assimilated American Jews whose Hebrew or Yiddish wasn’t necessarily up to snuff.

In the 80 years it’s been in print, the Haggadah has been through very few changes. In the 1960s, Joseph Jacobs Advertising changed the original cover to the iconic blue one; in the 1990s, an error in the order of the service was corrected; and finally, in 2011, the cover was revamped and the English text updated to adopt a more gender-neutral and less archaic phrasing — say goodbye to “thees” and “thines.”

For Gurock, the updated text is a testament to the capitalist aspect behind this particular haggadah. Rather than going against tradition, he said, “it reflects an ongoing sensitivity to the consumer.”

“It’s an ongoing tradition that people continue to relate to, despite all the new haggadot that are all more intellectually and spiritually based,” he added.

This genius marketing ploy is the reason that after four cups of kosher-for-Passover Seder wine, you’ll be able to enjoy a fifth cup — and it’ll be good to the last drop.

101 Years of the Maxwell House Haggadah