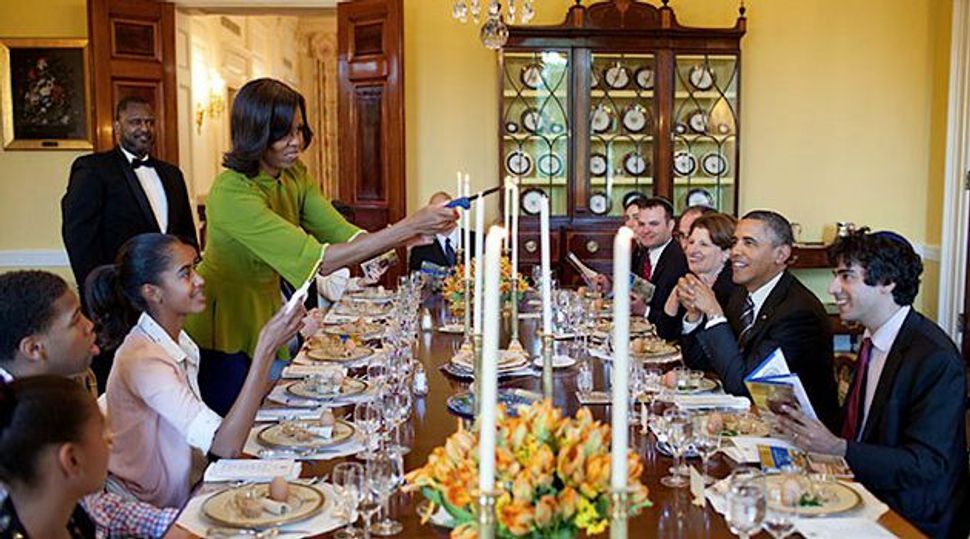 For a president of the United States, the personal is inevitably political. But there is one annual event at the White House that truly is personal for its current chief resident — or at least as personal as anything can be in the most watched building in the country.

President Obama’s upcoming Passover Seder, scheduled for March 25, will host just 20 or so participants this year — more or less the same core crowd that has been attending it since 2008, when three young staffers began the tradition while on the campaign trail and then-senator Obama surprised them by dropping in.

In many ways, this presidential Seder resembles that of many families, if you can look past portraits of former first ladies adorning the walls, the elegant crystal chandelier hanging over the guests’ heads and the White House china on which the gefilte fish is being served. The Haggadah of choice is Maxwell House, and the Passover fare is traditional, featuring classics like matzo ball soup, brisket and kugel.

But there are some differences in the ceremony itself — such as the annual reading of the Emancipation Proclamation right before Elijah sneaks in, and the president’s vocal impersonation of Pharaoh. And, of course, the Secret Service always knows where the afikomen is hidden. “When you work in politics, the people you work with are your family,” said Arun Chaudhary, one of the campaign aides who began the now annual tradition, explaining the uniquely personal nature of this Jewish White House event.

It was in 2008, during the rough Pennsylvania primary, that Chaudhary, Eric Lesser and Herbie Ziskend unknowingly began an Obama White House tradition. Disappointed that they wouldn’t be able to return home for Passover, the three aides made plans to meet up at 10 p.m. in a basement conference room in the Sheraton Hotel in Harrisburg. Weaving through cheerleaders from a convention the hotel was hosting, the trio brought their collected Seder items: a burnt bone from the hotel kitchen, Maxwell House Haggadot, shmura matzo squirreled away from Penn Hillel by Lesser’s cousin, and a bottle of Manischewitz wine.

“The spirit of Passover is, if you’re traveling, you do the best you can, and you celebrate it anywhere, under any circumstances,” said Lesser.

Just as they started the Seder, Obama stopped in to join them. “He peppered us with questions, keeping with traditions of a Seder…. We had a great time. It was a very special moment… in the middle of an exhausting campaign,” Lesser explained.

A year later, on the way to a meeting in the White House, “the president shouted, ‘Hey, are we doing the Seder again?’” to Lesser, who by then was working as a special assistant to Obama’s senior political adviser, David Axelrod. “Yeah. Sure,” he yelled back.

That year, the original staffers, plus a few others, and a handful of Obama’s friends and family, initiated the first official White House Seder. Planned by the original trio, it was intended to be “true to the original spirit” of the 2008 Seder, Lesser said, though, he joked, “it was in much nicer surroundings.” Still, the group stuck with the Maxwell House Haggadah, served Manischewitz wine and shmura matzo, and tacked on the line “Next Year in the White House” to the end of the Seder.

The traditions have stuck. The evening’s readings are done, as always, as a round robin. “We do a rotating leader. When you’re with the president, it’s presumptuous to say we lead it, but we start it,” Lesser said. (The “president does the best Pharaoh voice around,” Chaudhary added in an email.)

The Seder service is fairly short and efficient, in deference to the president’s busy schedule. Nevertheless, some additions have been made — most notably by Dr. Eric Whitaker, a personal friend of the Obamas who reads the Emancipation Proclamation aloud nearly every year.

“There are interesting and poignant similarities between the Passover story and the African-American experience, and that’s not lost on the participants,” Lesser explained. The Seder, he noted, is “a moment to reflect on justice and themes of redemption and freedom in biblical, historical and present contexts.”

Despite the addition, the Seder is decidedly nonpolitical, though Chaudhary acknowledged that given its theme of liberation, “in a way, every Passover is a political discussion. Ours is also like that, but no more so.” The evening he said, includes “a bit of argument, a bit of figuring it all out and time to get together.”

For its three originators, it’s also a kind of homecoming. All have moved on to jobs outside of politics. But each Passover, Chaudhary said, “it’s very comforting and very familial and very familiar.”

As in other family Seders, participants have taken on specific roles over the years.

Chaudhary jokingly calls himself the crazy uncle. “I always make a big speech about the Hillel sandwich,” he said. “It was a major breakthrough in Passover technology and predates the Earl of Sandwich.” (The earl is often credited with inventing the sandwich.)

Ziskend takes charge of breaking the first matzo and hiding the afikomen each year. “It’s no different than you hiding it at your grandmother’s house, except there’s a Secret Service person watching you stash it away. And the house is a bit bigger,” he said. Malia and Sasha Obama recite the Four Questions. They also hunt down the afikomen in exchange for small gifts — like a rubber chicken for their dog, Bo, and bottles of nail polish — instead of money.

“It’s a great honor, but it’s become like [a] Seder we have at home,” Ziskend said.

The White House staff adds important touches to preserve that atmosphere. There is, for example, the 1950s-era Seder plate complete with illustrations from Chaudhary’s mother-in-law, instead of a fancy silver or crystal option.

But the most notable staff effort is the food. The menu consists of recipes submitted by Seder participants. Cristeta Comerford, the White House’s executive chef, re-creates them, incorporating produce from the White House garden when possible.

“It is always challenging to duplicate a grandmother’s recipe,” Comerford said. “Their years of expertise cooking a traditional recipe passed down from generation to generation is quite tough to duplicate.”

According to Lesser, Comerford succeeds. The first time he tucked into his family’s carrot soufflé at the Seder, it was a “jarring experience,” Lesser recalled. “I’m sitting in the dining room of the White House, with portraits of first ladies and a beautiful setting and I had a flashback to the house I grew up in.”

Previous Seders have also featured a roast chicken breast recipe from Ziskend’s grandmother, and a rich matzo ball soup recipe from Patricia Winter, the mother of Seder attendee Melissa Winter, a deputy assistant to the president and senior adviser to the first lady.

This year’s menu will include brisket and kugel, along with new matzo ball soup and haroset recipes. The haroset recipe, courtesy of Patricia Winter, includes apples, walnuts, ginger and Manischewitz wine. “Of course,” said Melissa Winter, “[my mother] thinks I should go down to the White House kitchen before the Seder to taste it and make sure it’s just right.”