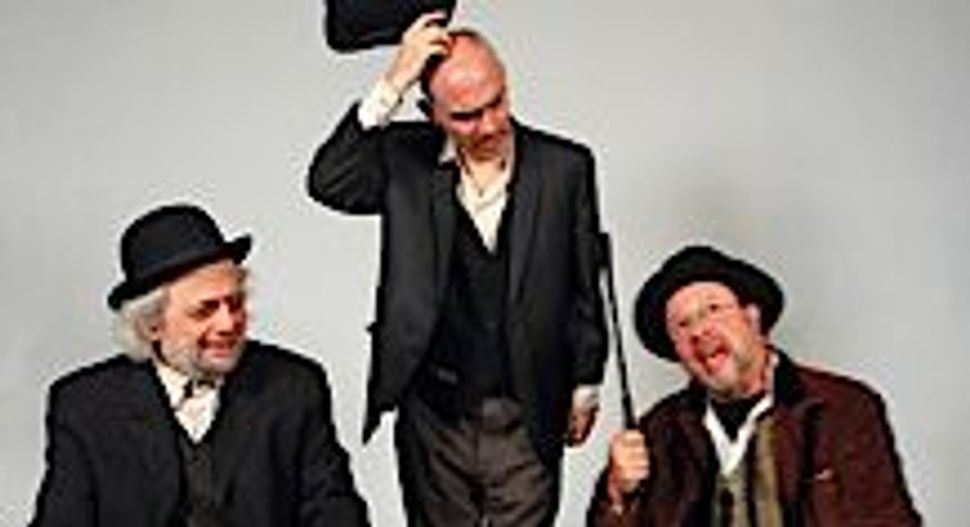 On the 60th anniversary of “Waiting For Godot,” Samuel Beckett’s existential comic-tragedy will be staged in Yiddish for the first time. It’s an idea that is both obvious, and ground-breaking, casting a new light on the masterpiece. 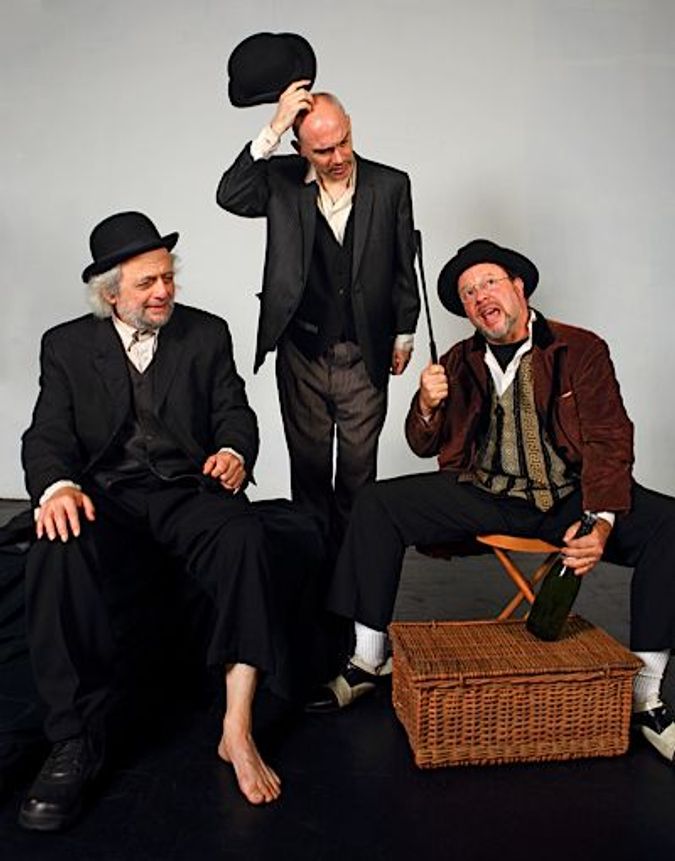 The play will run from September 20 to October 13 at the Castillo Theatre in Manhattan (543 W. 42nd St.) and is the brainchild of David Mandelbaum, artistic director of the six-year-old New Yiddish Rep, a company dedicated to presenting Yiddish plays and Yiddish adaptations of classical and contemporary works.

“Though Yiddish theater has a tradition of performing masterworks, it’s now identified with musical revues and light entertainment,” Mandelbaum said. “Yiddish is a riveting language and has compelling theater, but it’s in danger of becoming archived and relegated to YIVO.” Mandelbaum would like to see the New Yiddish Rep become a resident, repertory theater and is hopeful that “Godot” will serve as a stepping stone to that end.

Initially, the creative team wanted to set the play in a post-Holocaust universe inhabited by concentration camp survivors. Though the Beckett estate put an end to that idea, the artists have little doubt that Holocaust imagery will be evoked when the characters speak Yiddish and refer to the ashes and millions who are dead.

“That gives the drama a context and clarifies what it’s about,” Mandelbaum said. “Beckett, who wrote ‘Godot’ in 1947-48, had to be drawing upon the previous ten years of history.” The act one rehearsal I observed was startling in its resonance. It was also haunting and very funny, its despair and cataclysmic landscape notwithstanding.

Mandelbaum (who plays the earthy Estragon) believes the Yiddish cadences and physical gestures identified with the language make the material more accessible to everyone. The themes are universal and it’s no fluke that the “boy” in “Godot” is played by Nicholas Jenkins, an African-American youth who has learned Yiddish.

Not coincidentally, the Castillo Theatre — whose mission is to produce multi-cultural and African-American productions — is Mandelbaum’s closest ally and, indeed, Godot’s co-producer. He finds it ironic that Jewish organizations have not been more supportive, financially or otherwise.

“This kind of cultural mix is one of Castillo’s hallmarks,” said Diane Stiles, managing director of the Castillo Theatre. “Theatre at its best can expose us to ideas, people, and places we wouldn’t encounter otherwise. Through theatre we can get to know the ‘other.’ So even though we’ve never done a Yiddish play before — or any show in a language other than English — Beckett in Yiddish is, we think, an especially good fit for us.” Stiles anticipates a diverse audience who will have access to English and Russian translations on projected supertitles.

The play’s translator is Shane Baker, a Kansas City-born Episcopalian who is a Yiddish theater scholar and actor (and star of a Forverts video series) who frequently performs in Yiddish. In “Godot” he tackles the philosophical Vladimir who is endlessly agonizing over his ill-fitting hat.

Despite the many complexities in translating the text into Yiddish — and it’s an almost literal translation — Baker was drawn to the project because of how stunningly well Yiddish meshed with the script. “To the broader public, Yiddish has the air of vaudeville and shtick and at the same time evokes obscurity, which resonates with the avant-garde aspects of the play,” he commented.

Director Moshe Yassur, a Romanian born Holocaust survivor, saw an uncanny connection between Beckett’s characters and the fate of Yiddish language and culture that were “on the brink of extinction and brutally uprooted.”

“Yiddish inherently brings out the tragicomic qualities of the play,” he remarked. “The play reflects the Jewish experience throughout history and the characters are Jewish archetypes,” added Avi Hoffman, who plays the coarse and brutish Pozzo barking out orders to his slave, who is ironically named Lucky (Rafael Goldwaser). The latter is an academic type whose fatalistic worldview has rendered him psychically paralyzed.

Productions of “Godot” have been translated into Hebrew but are different in tone and aesthetic. The Jewish archetypes that are rooted in Yiddish— and so fundamentally Beckettian — do not exist in Hebrew, Hoffman said.

“Hebrew gives the play a more forward looking quality,” noted the production’s dramaturge, Beate Hein Bennett. “Yiddish, being the language of a culture that was programmed for destruction, points to characters who are bound to a vanished past while looking for a place to exist. Thus the tragic-comic quality of such an existential conundrum hangs in the balance: To continue, but how? Yiddish also represents the languages of all involuntary exiles who are forced to redefine themselves.”

“Hebrew is the language of a state,” Goldwaser pointed out. “Yiddish has no state. The Hebrew rhythms suggest answers, while those in Yiddish suggest questions.”

As an example of a tiny accommodation made in the text, Baker points to the line, “I don’t know,” which is repeated throughout the play. In an effort to capture the spirit of the drama in Yiddish, the statement becomes a question, “‘Ikh veys?’” “In Yiddish it sounds better as a question and the Beckett estate did not object,” Baker said. “They said we got the Beckettian rhythm.”

All the actors believe acting is acting regardless of language but because Yiddish evokes an emotional connection to their collective history, traditions, and personal experiences, their performances are informed by speaking the language of their parents and, in some instances, their own mother tongue.

“Yiddish is so much more expressive than English,” observed Hoffman. “As an actor it’s easier for me to relish the words which I have to say.” For Goldwaser “Yiddish is playing with the most intimate cord that connects me to my roots.”

But there are challenges as well, in part because Yiddish is not a widely used or heard language today. “We have to work harder to get the pronunciations and stresses right,” said Baker. “And since we all have the parallel mission to honor Yiddish, we feel great pressure to get it right. Because if we don’t who will?”

Baker studied the language with legendary Yiddish actresses Mina Bern and Luba Kadison and, as an outsider, he is especially diligent in speaking correctly.

Baker’s formal Yiddish is perfect for his character, says Yassur, noting that each actor voices a slightly different Yiddish depending on his background. And, according to Hein Bennett, that is exactly right for the play since the characters, to judge by their names, come from different countries.

To further reflect the spirit of the play, the cast is international, with roots, respectively, in Argentina, Germany, and the North Bronx; some come from Orthodox or Conservative families, others hail from Hasidic backgrounds; while still others were brought up by Yiddishists. All have been affected by the Holocaust either directly or through the experience of their parents.

Today the artists are secular and mostly indentify with an experimental theater esthetic. Mandelbaum is perhaps the most political of the lot and views theater “as a tool for Tikkun.” For him “Waiting for Godot” is a play about morality as much as it is an existential work.

“Though we have survived an apocalyptic experience, right now people are on the brink of extinction,” he said. “We are unable to transcend nationalism, geo-political boundaries, or create a world in which everyone has a dignified and meaningful life. That’s what we’re still waiting for. Redemption is up to us. Will Godot ever show up? We have to take that into our own hands.”