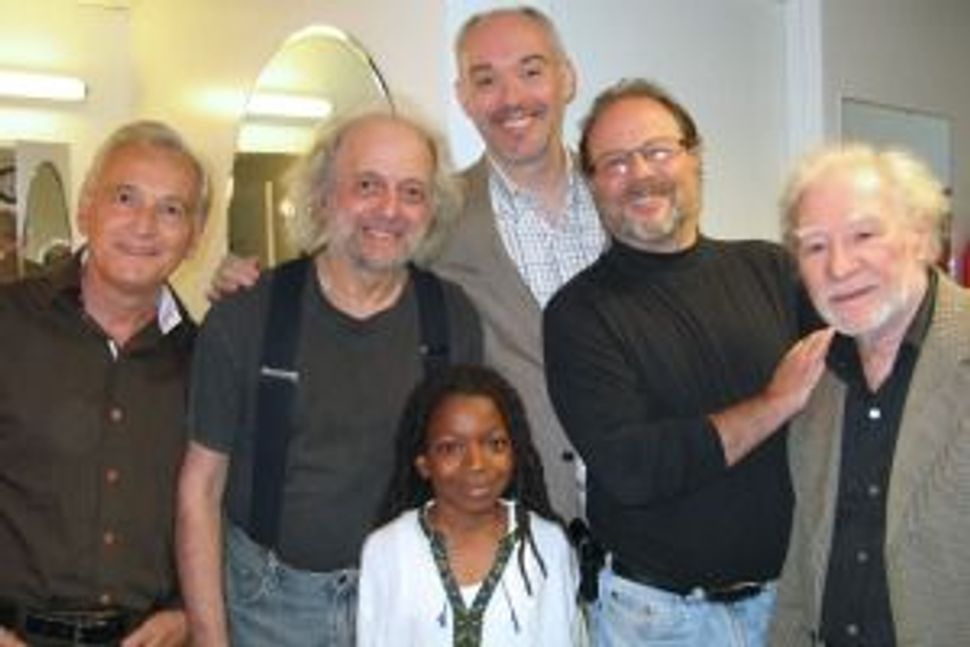 “I was told not to worry” Shane Baker, translator from English into Yiddish of Nobelist Samuel Beckett’s “Waiting for Godot” confided post opening night of the New Jewish Rep and Castillo Theatre’s world premiere of “Vartn Af Godot.”

“‘Godot in Yiddish? I barely understand it in English!’” Shane recalled a friend’s reaction. “Don’t worry, it makes more sense in Yiddish,’” replied the Kansas City, Missouri-born Episcopalian Baker. What prompted him to translate Beckett’s baffling “absurd” play into mame lohsn? “There was no ‘Aha!’ inspiration” replied Baker who — in beautifully articulate Litvishn Yiddish — also channels the character Vladimir.

“David called me. He wanted to produce it,” said Baker referring to David Mandelbaum, founder of the New Yiddish Rep, and the production’s artistic director who also portrays the character Estragon as though to the role born.

“It took me nearly a year and a half to translate,” said Baker describing the tsores and angst of finding just the right word in Yiddish with the help of verterbikher (dictionaries) and accessing Yiddish poets and wordsmiths like Yudl Mark and Uriel Weinreich. And I agree with Baker that that the Yiddish version does indeed make more sense than the original (which I first saw in 1956 during its U.S. debut at The Golden Theater). Because if you listen to Baker’s translation — with or without the English supertitles, at the heart of the characters’ lamentations and kvetching — be it the interminable wait for Christ, or the Moshiach or— according to the Workmens’ Circle motto — a schenere un a besere velt (a more beautiful and better world) — much of the content is what is at the core of many Yiddish/Jewish jokes which, in the worst of times, offered a means of coping with the unbearable.

“Each of us has a Godot he is waiting for. It is a Jewish plea,” Moshe Yassur, director of this must see Yiddish production, had told a small gathering at the [October 3, 2012] preview of the play hosted by author Nahma Sandrow and photographer William Meyers at their Upper Westside home. That night’s modest scene did not prepare me for the marathon, over-the-top production with a cast that deserves applause not only for talent but physical endurance.

The character Lucky is portrayed by Argentine-born Rafael Goldwaser who now lives in France and is the founder of the Luftteater, which produces works, dedicated to Yiddish culture. Affable Avi Hoffman — currently shuttling between his one-man “Too Jewish” solo gig — portrays the abhorrent Pozzo with mouth-watering gusto. And bravo for 9-year old African American actor Nicholas Jenkins who — in Yiddish — portrays the character “Boy.”

At the West 42nd Street Castillo Theatre until October 13.