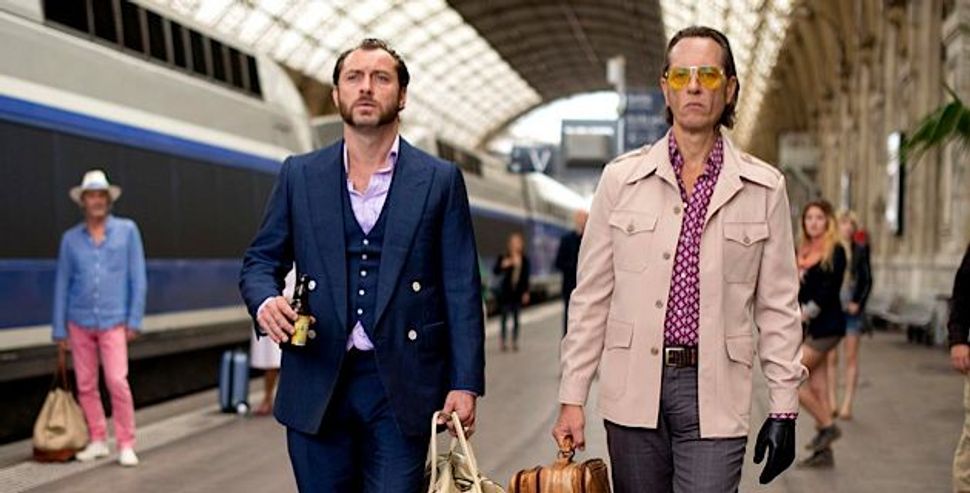 For the comedy crime drama, “Dom Hemingway,” Jude Law transformed himself into a vulgar, violent, puffy and unhinged alcoholic fresh out of prison. The film was written and directed by Richard Shepard (“The Matador”) and the cast includes Richard E. Grant (“Dracula”) as Dom’s pal Dickie and Oscar-nominee Demian Bichir (“A Better Life”) as Mr. Fontaine, a Russian mobster that Dom didn’t rat out. Dom feels entitled to a big reward, so after a few excursions to the English pubs to get pissed and have hedonistic times with hookers, Dom sets off to find Fontaine and get what he deserves.

The Arty Semite caught up with Shepard to talk about working with Law, his dad, and directing episodes of ‘Girls.’

Dorri Olds: Did you and Jude Law work well together?

Richard Shepard: It was incredible. I’ve never had an experience like I had working with him. Beyond being just an insanely decent human being and a down to earth guy who’s great to go out for a beer with and hang out with, he is an incredibly dedicated and prepared actor. He was dedicated to Dom on every level. We spent hours discussing Dom’s look: facial hair, no facial hair, a broken nose, no broken nose, hair greased back, and the wardrobe.

How much weight did he put on?

Twenty pounds at least. You can see the bulkiness. Jude was drinking 10 sodas a day, then drinking fake beer and smoking a lot of cigarettes. Poor guy, he’s lucky he didn’t have a heart attack.

How long did filming take?

We blocked everything in before we started shooting. We’d go to actual locations without the other actors and be outside with no one around and he’d just rehearse with no pressure of a time constraint. We were able to shoot the movie in 30 days because we were incredibly well prepared and together we made sure not to mess Dom up.

We talked about Dom as if he were a real person. Jude and I were protecting Dom. We’d say things like, “Dom is really vulnerable here,” and both knew the other understood.

Can you expand on that?

I understood Dom because I created him and I knew that Jude understood because he took this creation and made it his own. We worked together to create this person. Dom became very tangible, very real. We both believed in Dom and cared deeply about him.

Was it tough to say goodbye when the project wrapped?

By the time the movie was over, yes, I felt sadness, it was a sad separation. I miss Dom far more than I miss Jude. I love Jude but we had created this guy who was so entertaining all the time.

Did you write the part for Jude?

No, but when I finished writing the script, I started thinking about who I’d like to see in that role. I wanted someone who had never played a part like this before who could reinvent himself. I also wanted someone who’d done Shakespeare because there is a theatricality about Dom. I wanted an actor who’d done Shakespeare and one who was just finishing up being a matinee idol and willing to let go both physically and emotionally and not have to protect an image. All of these things led me directly to Jude who is an incredibly fine actor.

Where are you from?

I was raised on the Upper West Side.

Was your family religious?

My dad died about 10 years ago. As he was getting sick he brought religion back into his life in a way that hadn’t been there during my childhood. He started wanting to go to Passover dinner and to synagogue. I think he was seeking solace.

Did his spiritual search bring you two closer?

I was very close to my dad. I saw him looking for answers that he never could find. We were still close during the last few months of his life but he was seeking a “Why” and a “How can I turn this around?” Neither question was answerable.

Do you feel sad that you couldn’t show him “Dom Hemingway”?

I think he would’ve had a blast with it. He loved movies.

Was he also in the movie business?

My dad was an artist and a loan shark. He was also an appraiser of antiques and a gambler. He was a man of many different paths and most of them illegal and nefarious. There’s a bit of my dad in Dom.

I’ve been directing episodes of “Girls” for the last three years. I’ll be directing another few episodes this summer. “Girls” is about as different as “Dom Hemingway” as you can get. It’s been nice to toggle between those two worlds. I’m also writing a new script and hoping I’ll get to direct but that, and 25 cents, will only get you a nickel. [Smiles]