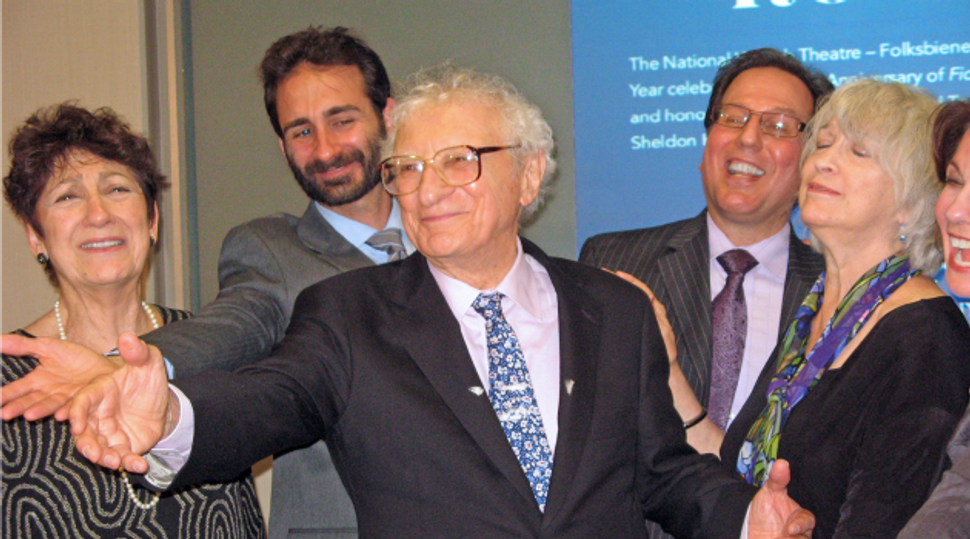 “The sad thing is that Joe Stein and Jerry Bock can’t be part of this celebration,” mused lyricist Sheldon Harnick at his 90th birthday bash hosted on June 2 by Jeffrey Wiesenfeld, a principal of Bernstein Global Management at its New York City headquarters.

It was Stein who wrote the book, and Bock who wrote the music for the world famous musical “Fiddler on the Roof” which is celebrating the 50th anniversary of its Broadway premiere.

The event also championed the 100th anniversary of the National Yiddish Theatre-Folksbiene with performances by artists whose connection with “Fiddler” ranged from its stage launch as well as the 1971 Norman Jewison film starring Topol as Tevye.

With Folksbiene artistic director Zalmen Mlotek at the keyboard, greetings by Folksbiene executive director Bryna Wasserman, the formidable lineup of talent included Joanne Borts;Carolyn Mignini who made her Broadway debut in “Fiddler” as Chava; Joanna Merlin who created the role of Tzeitel; Mimi Turque-Mare who played Hodl and later Tzeitel in the original production of “Fiddler;” Nava Small who played Chava in the film; and Deborah Graussman who played Chava in the North American tour of “Fiddler” starring Harvey Fierstein and Theodore Bikel, and Topol.

Columnist Jeffrey Lyons (son of Leonard Lyons who wrote the syndicated column “The Lyons Den”) joshed: “If I weren’t [Harnick’s] cousin, I’d pretend I was.”

Frederick Morton, author of “The Rothschilds” which became another Harnick-Bock hit musical, mused: “When I did my research I was astounded at the Rothschilds’ philanthropies, finance…never dreamed that one day we would be dancing and singing them on Broadway.”

Addressing the roomful of “Fiddler” and Folksbiene fans, Harnick recalled that when he invited choreographer Jerome Robbins to direct “Fiddler,” Robbins remembered that as a six-year old his parents had taken him to visit the family’s shtetl roots in Poland. “He said that even as a six-year old it was a memorable experience” that following the destruction of the shtetls in World War II, Robbins felt “’This gives me the opportunity to bring that shtetl culture back to life…on stage…for maybe 25 years.’…. He’d be surprised that it is now 50 years.”

Reviewing “Fiddler“‘s trajectory, Harnick recalled: “At one time there were five-six production of ‘Fiddler’ simultaneously playing in Finland!” (I think he said something sotto voce it was possibly due to the Finns not liking the Russians). That the Japanese wondered, “How could you translate so Japanese a story into other languages!?” I flashed back to a conversation I had with Harnick following a 2004 performance of “Fiddler” starring “Alfred Molina” as Tevye. Reacting to criticism that Tevye was not played by a Jew, Harnick had lashed out:” I am trying to put this ‘Jewish’ thing behind me. It’s so stupid…. The original cast was 70% non-Jewish. Zero Mostel (Tevye] was Jewish, but [his] Golde was not…Now Tevye’s not Jewish and Golde is!”

At celebration’s end, a beaming Harnick thanked everyone for “wishing me a happy birthday,” adding “and may I have many more.” As a standing room full of fans sang “Happy Birthday” in Yiddish and English, Harnick’s voice could be heard singing: “Happy Birthday to me!”