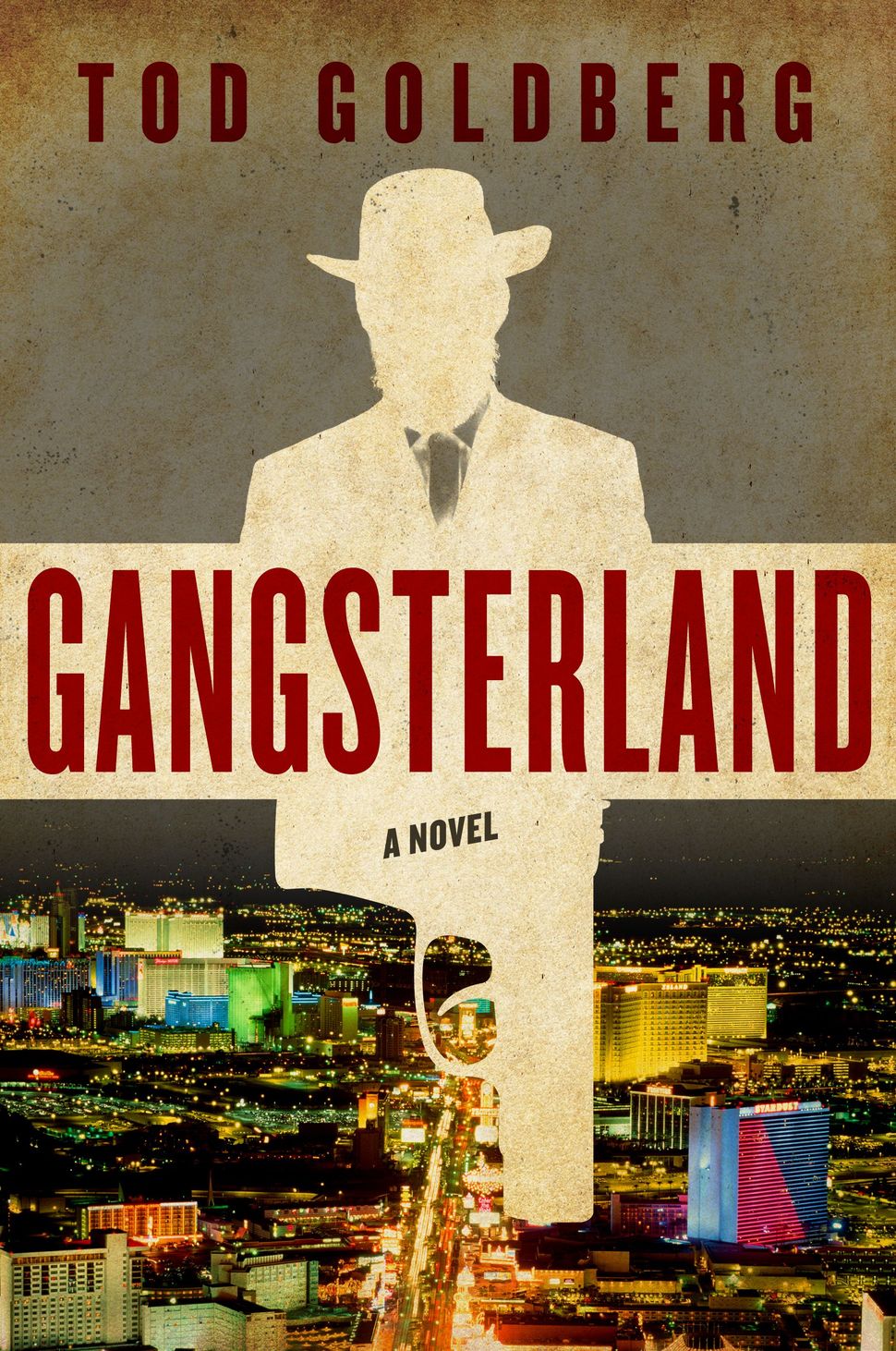 David Cohen’s the new rabbi at Temple Beth Israel in Las Vegas. He’s a learned guy who drops pearls of Torah wisdom for admiring congregants. And he’s overseeing both preschool and funerals for the growing shul. 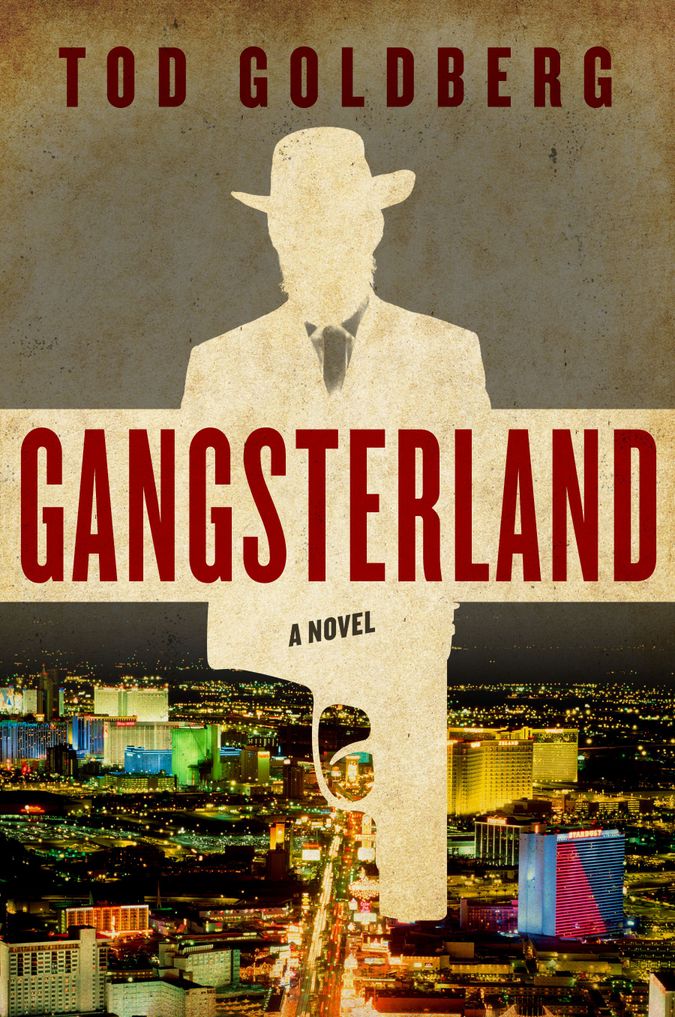 Oh, Rabbi Cohen’s also Sal Cupertine, a ruthless Chicago mafia hit man who’s had to assume a new identity after getting set up for the murder of FBI agents. And in Tod Goldberg’s laugh-while-you-cringe new novel “Gangsterland,” he’s one of the most compelling, and repulsive, crime-fiction protagonists in a long time.

The director of an MFA writing program at University of California-Riverside’s Palm Desert campus, Goldberg’s been a prolific novelist and story writer, with a raft of compulsively readable paperbacks based on USA Network’s hit series “Burn Notice” under his belt as well.

The Forward caught up with Goldberg from his office.

Michael Kaminer: David Cohen is a mask for Sal Cupertine, but you also get the feeling the new identity has changed Sal for real. Did you want the reader to walk away with a sense of awe around the transformative power of the Talmud and Midrash? Or was the character’s disguise just a device?

Tod Goldberg: I wanted to show that spirituality can offer the opportunity for change. Every death in the book has a consequence, as does every action Sal/David takes. I think he gets new neural pathways in his mind shot through with these religious texts.

By the same token, I didn’t want it to be a book where if you weren’t a Jew, you were like, “Oh, for God’s sake…” Spirituality here is about allowing a person to have a vision of themselves outside the world they live in, and the sense of something larger at work.

No one in the story comes off clean, except maybe children. Even rabbis are corrupted. Does that reflect your view of human nature?

I believe we all have our problems. We’re all works in progress. Particularly in crime fiction, you’re dealing with shades of horrible. Think of classic crime fiction — Sam Spade was a horrible human being, a dreadful guy. There’s a lineage of shades of grey with people who do bad things. I wanted to show the evolution of someone really horrible — like Sal — who perhaps by end of the book, you get a grudging empathy for. Someone loves him, and he loves somebody. That creates a sense of identification for the reader — I hope. There’s something in him that’s not unlike you.

Before Sal goes into hiding, a mob boss tells him, “You mess with one Jew, you’re messing with all of them.” What does that mean?

The fascinating thing for me about Jewish culture, subsequent to World War II, is a real tie that binds each of us together. When you see an injustice done to a Jew, you immediately react — or at least I do. For example, as soon as I heard [ theanti-Semitic vitriol] Mel Gibson had said, I swore I’d never see another one of his movies again. Now, Mel Gibson has no actual bearing on my life. But what anti-Semitism has done is make Jews say “never again.” No one’s going to mess with us.

As Rabbi David Cohen says in the book, quoting the Talmud, “If a man comes to kill you, wake up early and kill him first.” Jews have to be bound together, because the enemy is coming. In the last five years, as I’ve gone on my own spiritual journey, I’ve come to realize that if someone was to come and harm me, another Jew will stand for me.

What was your spiritual journey about?

I started to write this book in 2010. My mother had just died. My father was already dead. My mother was a crazy person. But when she died, I felt a huge genetic ache, despite the fact that I didn’t like her and she was bad and abusive. I wanted to know why: Why do I feel such guilt? Why did my immigrant grandparents go through what they did?

I started to read books on Jewish identity, the Talmud, Torah, partly to deal with the psychological pain I was having, and partly to find answers. I never really felt religion was the answer for me. But I found that the philosophy was. It helped to know what I was feeling in 2011 was what someone in the 10th century was feeling as well.

Also, you get to be in your 40s, and you want to know what comes next. I got married and fell in love when I was 27, and that’s when I started to believe in the afterlife. Because you have to.

When you were writing the book, did you watch “A Stranger Among Us” or any embedded-among-the-Jews stories?

No. I didn’t think about those. The one thing I did see, after I finished the book, was some story about how you can hire rabbis to come from Israel to come kill people for you [laughs].

What did influence me most in terms of the Jewish side was an understanding of the struggles of my grandparents. They came from the Ukraine to Walla Walla, Washington, and were complete outsiders, Jews trying to fit in. They knew they were looked upon as “other.” My grandfather didn’t speak a word of English. He was 8 years old, living in a tiny rural town, abused and tortured by his peers every day. But he became a big community leader. Everyone who beat him up came to him for help. And he gave it to them. There’s something inside us as Jews that even people who abuse us come to us for forgiveness and help, and we give it. I wanted to portray that sweeping metaphysical part of us. There’s something in us that makes us do better if we can.

But your portrayals of the staff at Temple Beth Israel make them seem a bit dim.

When you’re at top of the pyramid, and people ascribe you power, everything those people ask of you feels like it’s coming from on high. I wanted to examine that blind devotion, the cult of personality that comes along with power, whether it’s a rabbi or mafia kingpin. And in any crime novel, you have to have the rube.

There’s a great line in the book that basically equates Jewish day schools with criminal enterprises. Have you had personal experience?

I went to public school, but I have plenty of friends with small kids in private schools run by temples. The amount they’re paying… I mean, the kid’s 5 years old. How much do you need to spend to have him eat paste for the afternoon? Seriously, I have a natural fear of organized things — religion, government, parties, whatever. They’re easily corruptible. I wanted to show how even a school can get manipulated for ill. Schools and cemeteries are places you can scam people for money. When my own mother died, we got these insane bills — 15K for this, 10K for that. And you just write the check. If you have an idea to scam people who think they’re writing a check for the greater good, you can do it.

Well, CBS owns it, so more likely made into TV show. It’s hard — you have to find someone who could play Italian and Jewish — impossible! [laughs]. I’m picturing John Cusack. I see someone who doesn’t necessarily look like a tough guy. Maybe a young Dustin Hoffman type. But you have to get the sense something inside him could come to quick boil, and that he’s meticulous. Maybe one of The Beastie Boys.