The Most Jewish True Crime Book Ever 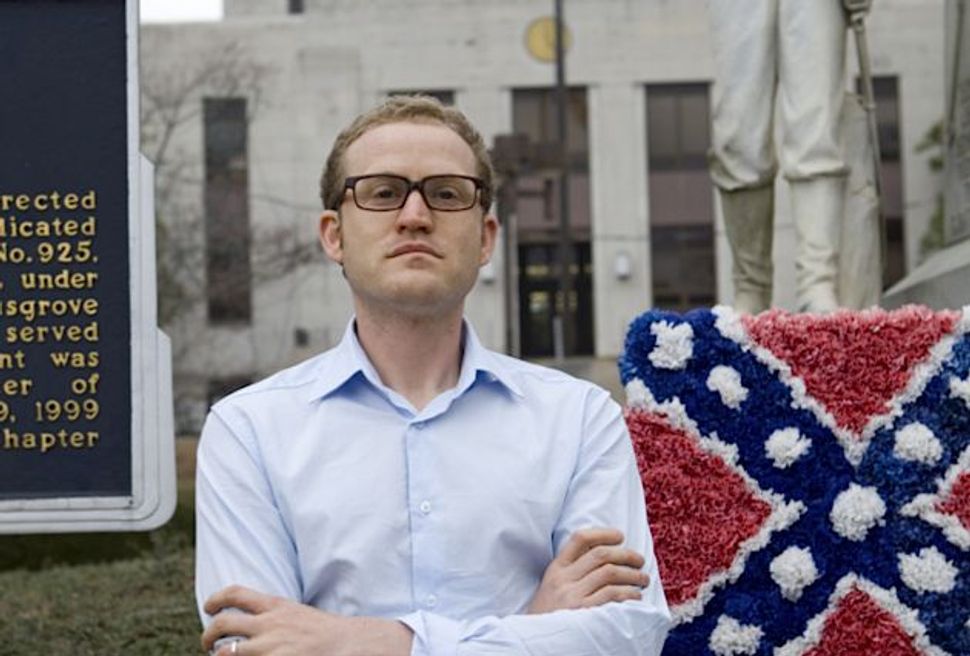 John Safran’s literary debut, “God’ll Cut You Down: The Tangled Tale of A White Supremacist, A Black Hustler, A Murder, and How I Lost Year in Mississippi,” arrived in the U.S. with momentum.

The Australian Crime Writers Association had already named it the best true crime book of 2014. New York magazine placed it squarely between “HIGHBROW” and “BRILLIANT” on its Approval Matrix, and dubbed it one of “7 Books You Need to Read This November,” writing, “Imagine In Cold Blood written not by Capote [but] by an Australian, higher-brow Johnny Knoxville.” And John Berendt, author of the 1994 mega-bestseller, “Midnight in the Garden of Good and Evil,” blurbed that it is “by turns, informative, frightening, and hilarious.”

As a card-carrying true crime geek, I can now vouch for the book, too. Safran’s inquiry into an elderly white supremacist’s stabbing death in 2010 at the hands of a young black man is chilling, insightful, compulsively readable, and surprisingly funny. It’s also one of the most Jewish true crime books ever written.

The book begins at a bar mitzvah when Safran is 10 years old, and his father points out a Freemason symbol on a nearby man’s tie. “In that moment… I became hooked on secret worlds,” he writes. Elsewhere, Safran recounts “my family’s Friday night Shabbos dinners” and how the rabbis at his old school would warn students, “If you marry a non-Jew, you’re finishing Hitler’s work for him!”

In fact, the author’s interest in intermarriage launches the story. Safran is a well-known comedian, journalist, documentarian and provocateur in Australia, and in an episode of his show “John Safran’s Race Relations” (which “pokes its nose into cross-cultural, interracial, and interfaith love”), he traveled to Mississippi to surreptitiously obtain a saliva sample from white supremacist Richard Barrett, with the hope of debunking the man’s pure-white lineage via DNA test.

Safran was also interested in testing his own spittle because, as he told the camera, “If I’m going to rule out 99.75 percent of women on the pretext that Jews should only marry Jews, I’m going to make damn sure I’m actually one.” He successfully obtained the sample by snatching a balloon Barrett blew up at an event called “Spirit of America Day,” but the episode never aired, due to threats of litigation. A year later, the man was murdered.

For Safran, it was back to Mississippi.

True crime stories are often travel narratives. And “God’ll Cut You Down” offers an indelible portrait of a state where visitors are greeted at the airport by a billboard with images of William Faulkner, John Grisham, Tennessee Williams, and the message: “YES WE CAN READ. A FEW OF US CAN EVEN WRITE.”

“I try to think of another place that would greet tourists with a paranoid and passive-aggressive accusation,” Safran writes.

As he probes the possible motives for Barrett’s murder (money? racial tensions? a sexual encounter gone wrong?) Safran meets a Jefferson Davis impersonator, a white supremacist podcaster who broadcasts from a trailer in his mother’s yard, and – via cell phone – Barrett’s imprisoned murderer, Vincent McGee.

Along the way, he reminds readers of just how many infamous race crimes took place in Mississippi: the murder of 14-year-old Emmett Till, for allegedly flirting with a white woman; the murder of the anti-segregation activist Medgar Evers; the 1964 murder of a young black man and two Jewish New Yorkers rallying to register blacks to vote that inspired the film “Mississippi Burning,” “the film that’s shaped the way Mississippi is seen around the world,” Safran notes.

At one point, the author goes to a lonesome gay bar where he reports, “Most of the conversations start with me asking about homosexuality and them seamlessly easing into complaining about black crime and asking me if the Aboriginals ‘you have’ are as bad as the blacks here. Mississippi. Where even the homosexuals are rednecks.”

If this all sounds a bit meandering, it is. “God’ll Cut You Down” is what one of my former writing professors would call a “notebook dump.” It’s “Dateline” meets “Adaptation.” In another writer’s hands, this approach could become sloppy and embarrassing. But Safran not only writes fluidly and fearlessly, he mounts a convincing argument against writing about crime with too much “clarity and confidence.”

“There’s this [Australian] true crime book about an Aboriginal death in custody,” reads one of the book’s final chapters. “The author paints precisely what happens the morning of the man’s arrest. He was wandering down the street like so. A woman was lounging over by that house. He was whistling this specific tune. The sun shone like this. The police van pulled over like that.”

“It bugged me, the precision with which the author knew about the morning,” he continues, “while I was still floundering over whether Richard pulled up outside the McGee’s in a black SUV (Like Vallena told me) or a bicycle (like Tina said). I spoke to the author and as it happens, she didn’t really know any more than me. She just committed herself to a fair-enough version of events. None of the true crime writers know any more than me, they just commit.”

The Most Jewish True Crime Book Ever