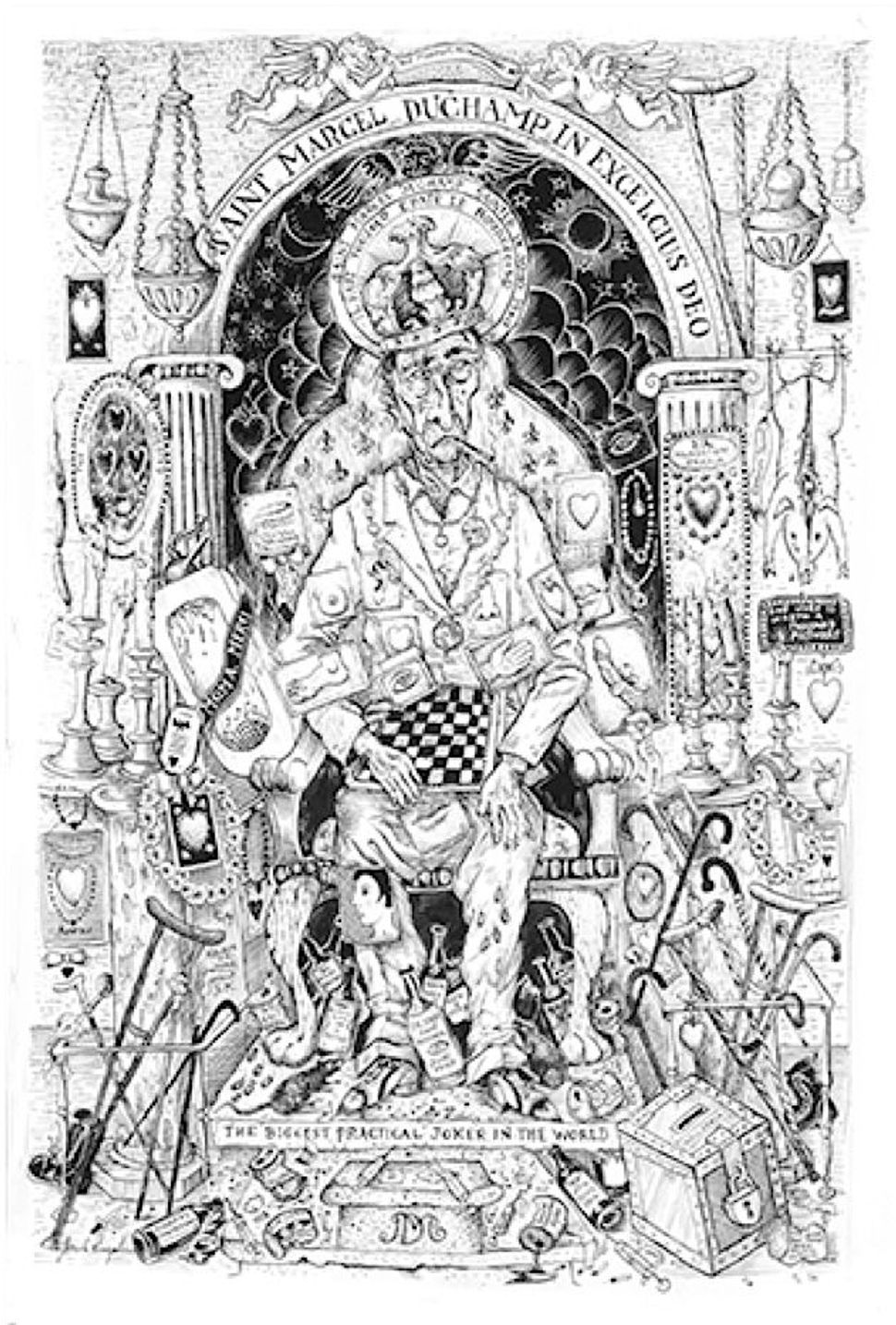 A certain Jewish weekly rejected one of Jonah Kinigstein’s scathing cartoons back in 2004; responding to the furor over Mel Gibson’s “Passion of the Christ,” Kinigstein had drawn Jesus tossing the movie into a bonfire in front of the White House.

“I’d sent it to the Forward,” Kinigstein laughs. “They told me, ‘Sorry. We don’t publish cartoons from the outside.’”

Inadvertently, that exchange captured the paradox of Kinigstein’s career. An art-world pariah most of his life, he’s become an unlikely star at age 92, with an acclaimed exhibition of his savagely satirical cartoons at the Society of Illustrators in New York and a new book from comics powerhouse Fantagraphics that shares its title, “The Emperor’s New Clothes: The Tower of Babel in the ‘Art’ World. “

As that name attests, Kinigstein’s work rips into what he sees as the vapidity, pretension and inanity of 20th-century modern art, from institutions like MoMA to gallerists like Ilona Sonnabend to critics like Clement Greenberg. Sacred-cow artists — Willem de Kooning, Jackson Pollock, Jasper Johns – don’t escape his poison pen, either.

“I put the cartoons up on walls all over Soho,” he says. “I really gave these people the business. And I got a lot of pushback. Some people wanted to fight with me.”

Jonah Kinigstein, ‘Adoration of the Magi.’ Courtesy the artist and Society of Illustrators.

They’d have a tough adversary. Kinigstein was born in the Bronx and raised on East Tremont Avenue in one of the borough’s rougher sections. His family was Jewish, but not especially religious; “we had Seders, things like that,” he says.

He studied architecture and painting at Cooper Union, which was still free at the time for deserving students. After serving in the Army as a photographer, Kinigstein bolted for Paris and Rome, where he studied art on a Fulbright scholarship and exhibited his paintings.

Back in the U.S., Kinigstein’s figurative work found a following, until it didn’t; as more diffuse art forms took over, his style fell out of favor among art-world gatekeepers. “There was no interest in figurative art or what I had to say,” he remembers.

To support himself, he launched a career in advertising and commercial illustration, drawing and painting on the side. “I’m really a painter. The cartoons came later,” he says. “I had to do something to clear the air.”

Eventually, Kinigstein sent his cartoons to Fantagraphics, where they lay in the office of publisher Gary Groth for five years. When Groth finally got around to opening Kinigstein’s mailing tube, he was blown away. “It was savage, contrarian work,” Groth says in the short film that accompanies Kinigstein’s MoCCA exhibition. The cartoons – which draw inspiration from classic satirical cartoonists like William Hogarth, James Gilray, and George Cruickshank — have been collected in a handsome 80-page volume that lands this month.

Jonah Kinigstein, ‘Opening at the Whiney Biennal.’ Courtesy the artist and Society of Illustrators.

Not everyone in the art world gets darts from Kinigstein. “I never lost interest in Picasso,” he says. “He was always figurative.” Kinigstein pointed to the packed walls of the Society of Illustrators’ gracious third-floor restaurant, where he spoke with the Forward. “You see all these people? They’re all commercial artists. They all have some form of figuration.” And when I shared some of cartoonist Eli Valley’s work with Kinigstein, the older artist sounds impressed. “This guy’s good,” he says.

Has the art world changed in the decades he’s been lampooning it? “Sure,” Kinigstein says. “It’s getting worse. There’s more money, more liars who just want to make money. There’s hype all over the place. You can’t just put bricks on the floor and call it art. But wealthy people keep buying it.” What about the argument that art’s in the eye of the beholder? Kinigstein steels his glance and pauses a beat. “That’s pretty unfortunate,” he says.

In the meantime, Kinigstein seems to be enjoying his belated moment in the sun. He’s even slated to lecture this spring at Parsons the New School for Design, the temple of art education in New York.

“I will not tone my message down,” he says. “If they don’t like it, they can walk out.”