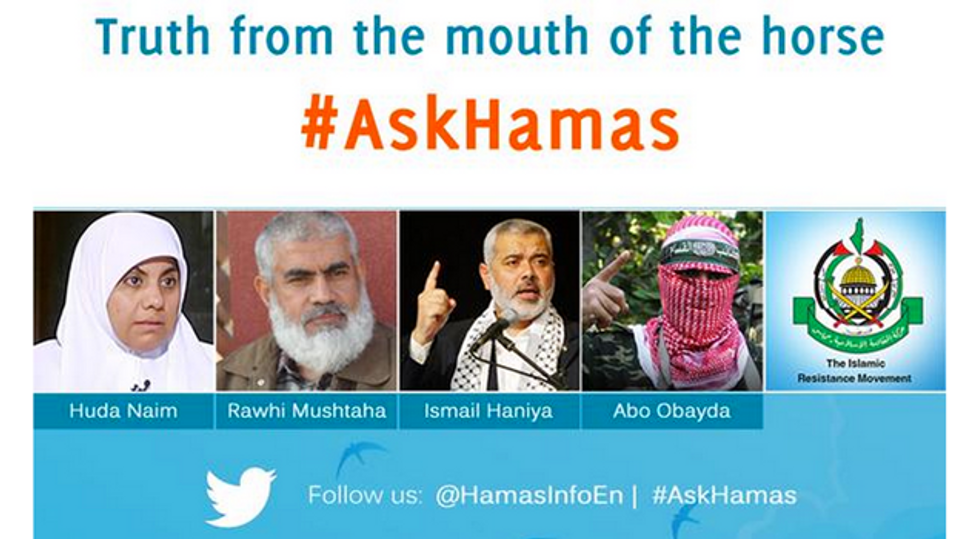 As an Israeli, I really believe in open and honest dialogue with Palestinians — but an #AskHamas social media campaign isn’t really what I had in mind.

No, it’s not a joke. Hamas has launched an English-language campaign on Twitter, calling on people to tweet questions at the organization. Hamas leaders will livetweet answers. According to Hamas media coordinator Taher al-Nounou : “the campaign is aimed at rejecting the labeling of the Palestinian resistance as ‘terrorists.’”

The campaign has barely even launched, but #AskHamas has already been flooded with — mostly Jewish, but not all! — tongue-in-cheek questions. Hopefully, Hamas has enough social interns to sift through thousands of tweets like these ones:

#AskHamas Why did you murder 30 civilians, including 20 people over the age of 70, at a Passover seder in Netanya in 2002?

#AskHamas what UN school in Gaza should I send my daughter to, if I don’t want her to trip over your stored weapons?

#AskHamas Did Tony die in the last scene of “The Sopranos”?

#AskHamas How do you feel about your leader hiding out in a fancy hotel in Doha while there was a war in Gaza?

Why do the Zionists make me see blue and black when the dress is white and gold? #AskHamas

#AskHamas Do you import the Israeli flags you burn, or do you manufacture them yourselves? pic.twitter.com/BX7DIyAjqU

#AskHamas Given you are never happy to see us Jews, can we assume it IS a gun in your pocket?

#AskHamas What’s your secret to cementing support from the international community? Also, is there light at the end of the terror tunnel?

While Hamas English-language Twitter handle has been mostly silent, it did reply to this tweet by Yair Rosenberg.

When you say you’re “working on” having elections, does that mean purging all opposition? Asking for Fatah #AskHamas pic.twitter.com/pDNKYNt4Ij

One could argue that this whole campaign has backfired. But I’m not so sure. If Hamas is looking to get social media attention, it knows that all attention is good attention — and it definitely has gained that.

12782 tweets were registered on the hashtag #AskHamas within the past 24 hours. The guys at @HamasInfoEn haven’t even launched the campaign!

The first official #AskHamas session starts today, at 1 PM EST. Let’s see how they dig themselves out of this tun… hole. (sorry, I must have been looking at these tweets for too long):