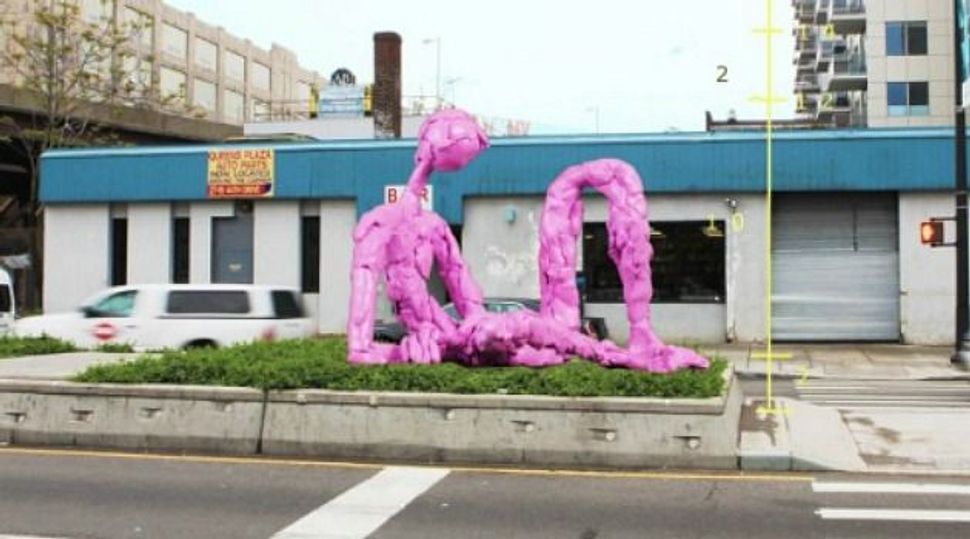 A rendering of Ohad Meromi’s ‘The Sunbather’

Gumby’s grandmother. Pink poop. The Pink Panther on a bender.

The reviews are coming in for a new sculpture by Israeli-born, New York-based artist Ohad Meromi — and it hasn’t even been built.

Meromi won a coveted slot to create “The Sunbather” under the auspices of the New York City Department of Cultural Affairs, whose Percent for Art program taps the city’s construction budget to fund public art projects.

But while he may have won over Percent for Art’s judging panel, Meromi’s neon-pink, reclining colossus did not win over locals in Long Island City, the gentrified former industrial hub in Queens where “The Sunbather” is planned to occupy a busy plaza.

“While public art can be wonderful, this seems like an absurd waste of money and is rather infuriating considering that the community was left out of the decision,” ranted one commenter on LICPost, a local blog. As The New York Times reported, an artist from Bushwick even erected his own sculpture on the site in protest.

“This is the strongest reaction I’ve ever had,” Meromi told the Forward. “I mostly work with museums and galleries. It’s a whole different game.”

Meromi’s measured take on the work, though, makes a giant pink sunbather in Queens seem like the most natural thing in the world. “It’s a response to the site, and to what’s happening to this environment, which is growing fast, with a lot of concrete, steel, and glass,” he said.

“‘Sunbather’ is a monumental human figure in the mid of this bustling urban development. But it’s in a position of rest. It’s almost an act of resistance, slowing down and stopping. Sometimes public sculpture is about moving faster, growing, developing. This is kind of the opposite.”

Why pink, which seems to have sparked extreme reactions from commenters — including at public hearings and community-board meetings Meromi attended as part of the approval process? “Introducing color and organic, soft lines to all of these angular vector things around it is almost a call to go back to a more human rhythm,” he said.

The Forward asked Reina Shibata, deputy director of Percent for Art, if her organization had ever rejected a selection if public opposition gets strong enough.

“The Sunbather is going through the full Percent for Art review process, which involves the community board, representatives from the council member’s and borough president’s offices, local arts groups, and city agencies,” she responded by email. “The design and review process is still underway, and the project’s preliminary design will go before the Public Design Commission later this year. These are the sorts of steps during which the artist has opportunities to refine a project based on public input.”

Though often pointed, Meromi’s work doesn’t usually generate controversy. Born on kibbutz Mizra in Northern Israel, he shuttled between suburban Tel Aviv and the kibbutz after his parents moved. “It meant switching between two very different models of living,” he said. “And it left me idolizing the original way of living.”

Meromi doesn’t consider his work explicitly Jewish, but “I’m pretty sure there’s a Jewish sensibility in it, though it’s hard to put a finger on,” he said. “My grandparents went against their Jewish religion and embraced socialism as a religion. But looking back, I see things are not as clear-cut as they seemed. Definitely in dealing with recent history, Zionism is something I’m thinking about.”

After building a career as an artist in Israel — his work is in the permanent collection of the Israel Museum — Meromi came to New York to pursue an master of fine arts degree at Columbia University. Along with exhibiting worldwide, he teaches sculpture at Bard College in upstate New York.

“My work is very involved with architecture, the experience of being within architecture, and how it affects one’s body as a person in the world,” he said. “My work’s very influenced by dance, performance, and gesture.”

Is his work political? “Only in the broadest sense,” he said. “It depends on the context. I am talking in a very general sense about reestablishing a relationship with the world we live in to create a sense of agency, an ability to own it and change it. I think of my grandparents’ path from Ukraine to Poland to Israel — it’s about place, immigration, identity, idealism, social justice, and longing. But I don’t wear that on my sleeve. It has to be in the work.”

A 2014 project at the Contemporary Jewish Museum in San Francisco repurposed photographs of everyday life in the West Bank as abstract portraits, “as a chronology of gesture of the occupation,” he said.

In the meantime, Meromi is “optimistic” his half-million-dollar, nine-foot-long sunbather will actually see the light of day. “I’m kind of positive,” he said. “I hope it moves forward.”

Shibata, the Percent for Art deputy, was less sanguine. “We can’t speculate on the outcome of the review process,” she said.