Why Medieval Art Is So Unflattering To Jews 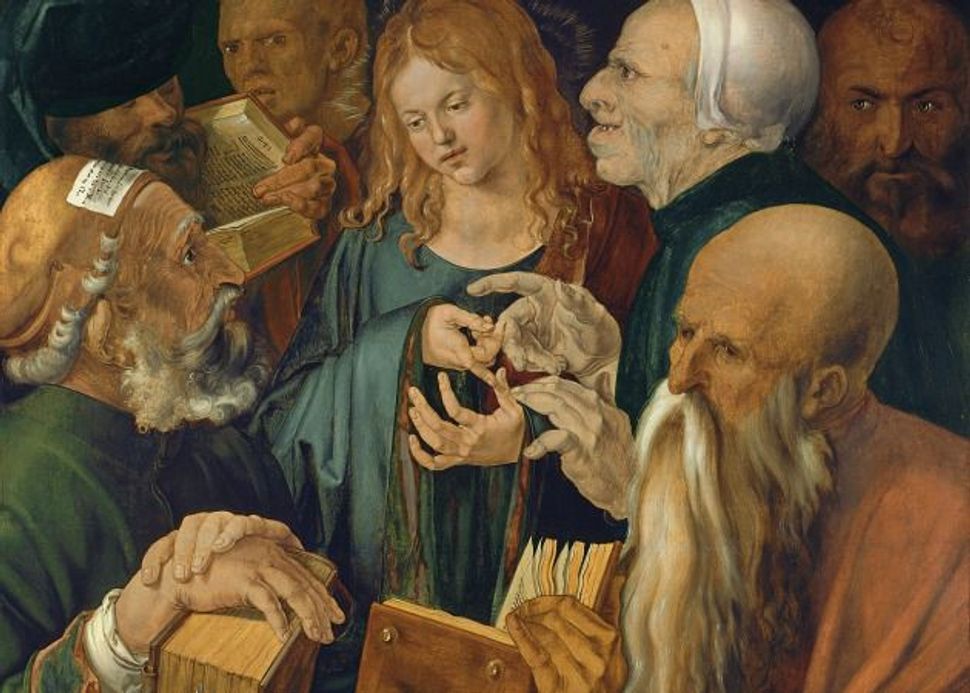 ‘Christ Among the Doctors’ by Albrecht Durer, 1506.

Those wishing to gain insight into the maturation of Jewish studies over the past few decades would be well served to immerse themselves in Sara Lipton’s recent book, “Dark Mirror: The Medieval Origins of Anti-Jewish Iconography.”

Lipton has amassed a rich trove of Christian art as data for her study, and has brought to bear on these materials the eye and mind of a well-trained and sophisticated art historian. She has analyzed Christian art and iconography from multiple and original perspectives, and used them to buttress some recent and important themes in the history of Europe and its Jews. At the same time, Lipton has raised serious questions with respect to well-worn and widely accepted perspectives on the history of Europe and its Jews.

Lipton’s early observations about the book’s title serve as a fitting introduction to the complex thinking that readers will encounter in its pages: “It is perhaps more than a little ironic that a book that often seeks to modulate the too-blackened canvas of medieval Jewish history with shades of gray should be entitled ‘Dark Mirror.’ I have chosen this title, overworked metaphor and all, in part because it acknowledges that Christian images of Jews were indeed often dark and hostile.

But it is also intended as a warning that these images provide only a distorted view of the period: that Christian art must not be seen as transparently ‘mirroring’ either prevailing Christian attitudes or actual Jewish status. Indeed, I argue throughout this book that anti-Jewish imagery was a significant factor in the creation of the attitudes and conditions it is often held to reflect.”

These ruminations serve as a warning to readers that they are about to be exposed to complicated and astute observations on the relationship of art to life, to the reinforcement of many prevailing modern stereotypes of anti-Jewish attitudes in medieval Christian Europe, and to the undermining of some of these stereotypes of ubiquitous and implacable Christian hatred of Jews.

‘Christ Among the Doctors’ by Albrecht Durer, 1506.

The most important data utilized by Lipton are presented in the 112 illustrations that usefully accompany the text. Lipton organizes her materials into six chronologically arranged chapters, which enables her to highlight major changes that took place in medieval European society and in its artistic depictions of Jews – from traditional imagery of Jewish denial of Christ and responsibility for his crucifixion, to medieval imagery of Jews as usurers and murderers of Christian contemporaries. (Chapter Six – “Where are the Jewish Women?” – stands outside the basic chronological organization but nonetheless presents fascinating issues.)

Perhaps the most important perspective brought to bear by Lipton reminds her readers that Christian art was addressed to Christians, meaning that efforts to understand the portrayal of Jews must begin with understanding the Christian purposes of these depictions. In order to grasp these purposes, she begins quite properly with traditional Christian thinking, focused at the outset on Paul and Augustine.

It is the Pauline and Augustinian legacy (indeed Augustine saw himself as simply an explicator of his teacher Paul) that Lipton emphasizes in the first appearances of Jews in medieval Christian art, in the early 11th century, as deniers of Christ. She convincingly refutes the occasionally expressed view that Jews were introduced into Christian art as a result of heightened anti-Jewish animosity unleashed by the First Crusade.

In rebutting this view, Lipton reinforces the growing sense that the violence associated with the First Crusade must not be exaggerated. This anti-Jewish violence played no role in the papal call to the crusade, or within the Christian armies that successfully conquered Jerusalem in 1099; it was vigorously repudiated by the key spiritual figure that dominated the Second Crusade. 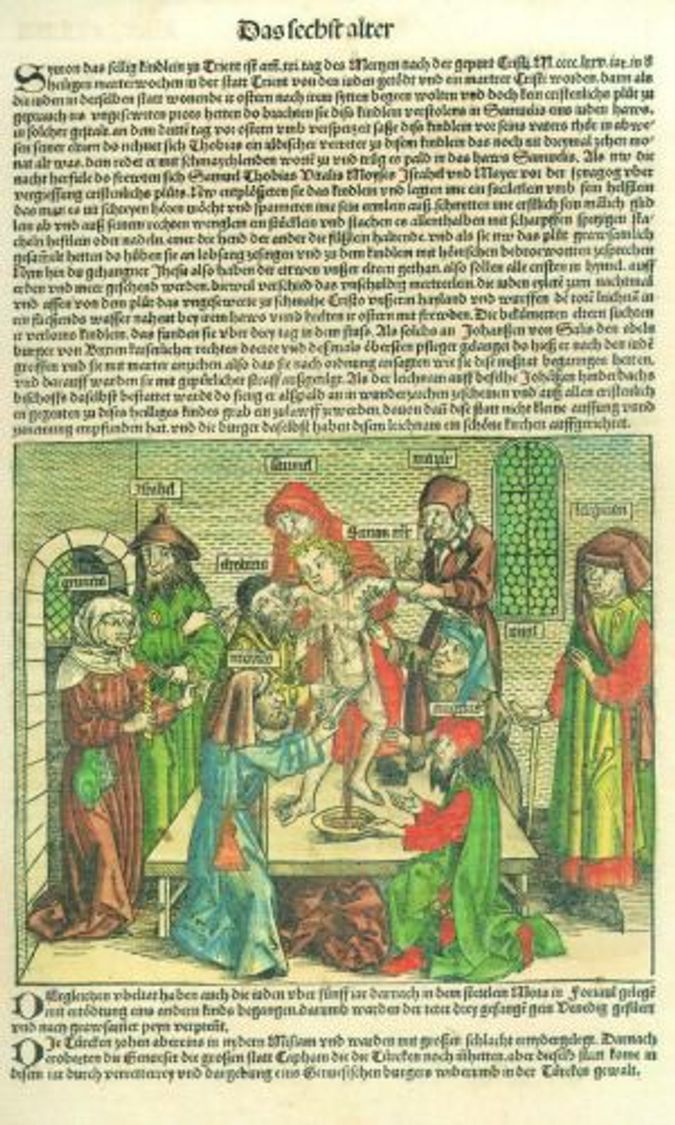 There were certainly well-documented negative developments over the medieval centuries: accelerating limitations on Jewish life demanded by the leadership of the Church; the spate of expulsions from major European states beginning at the end of the 13th century; the outbreak of periodic anti-Jewish violence; the reflections of intensifying animosity in Christian literary sources; and the evidence provided by Lipton of similar intensification of animosity in the realm of Christian art.

Nonetheless, Lipton — like others — warns against facile exaggeration of this negativity. During the late-medieval centuries and despite the difficulties endured, European Jewry continued to grow and to constitute an ever-increasing segment of world Jewry, eventually coming to dominate the world Jewish scene.

At the same time, Lipton reinforces the sense projected by a number of recent students of medieval Jewish history that anti-Jewish animus did in fact intensify over the course of the late medieval centuries. Post-Holocaust ruminations on the factors that paved the way to genocide focused heavily on the legacy of traditional Christian thinking. This initially led to the clarification of negativity toward Judaism and Jews in classical Christian theology.

With the passage of time, the perception emerged that Christian views of Judaism and Jews were hardly static, that there was noticeable change from antiquity through the Middle Ages, and that new and major anti-Jewish themes emerged over the course of the medieval centuries.

Lipton’s six chronological chapters trace the deterioration of Christian imagery of Jews during these medieval centuries – which, again, she insists must be seen against the backdrop of evolving Christian sensibilities, sensitivities and needs.

While each of these chapters addresses an identifiable stage in the process of deterioration of the imagery of Jews, to this reader the transition with the most impact appears in the chapter covering the years 1220 to 1300. During this period, the formats in which imagery of the Jews appears proliferated markedly.

Equally if not more important was the change in focus: “In moralizing imagery in various types of artwork, coins and coin-filled bags signified moneylending or avarice; cats, which were associated with hunting and nighttime and symbolized heresy, were shown with Jews; and crows, which collected shiny objects, and toads, which swelled themselves up, signaled greed and usury, the illicit amassing of wealth. Through these and other images, Jews, traditionally used to signify the outdated past, came to be identified with the most ‘modern’ of activities and tendencies — moneylending, philosophy, heresy, curiosity.”

A miniature from Grandes Chroniques de France depicting the expulsion of the Jews // Wikimedia Commons.

The transformation of European Jews from a relic of the outdated past to a source of present-day danger was a giant step in the deterioration of the imagery of medieval European Jewry.

Lipton’s insistence on the complexity of the issues with which she deals and on the importance of maintaining balance and perspective — Jewish circumstances were hardly uniformly dolorous, but deteriorating imagery of Jews can be discerned and traced — is ultimately grounded in the fundamental ambivalence with which Christians (and perhaps especially medieval Christians) viewed the Jews of antiquity and their Jewish contemporaries.

On the one hand, Jews had paved the way for Jesus, who fulfilled the divinely revealed prophecies that foretold his advent and activities; on the other hand, Jews had themselves failed to grasp the meaning of Jesus’ life and activities; the supposed divine punishment visited upon post-70 Jews served as a convincing sign of the reality of divine reward and punishment in the cosmos in general, and of the truth of Christianity more specifically.

Full awareness of this combination of positives and negatives is evident throughout Lipton’s excellent study, and underlies the complexity and sophistication with which she treats her important subject.

Why Medieval Art Is So Unflattering To Jews