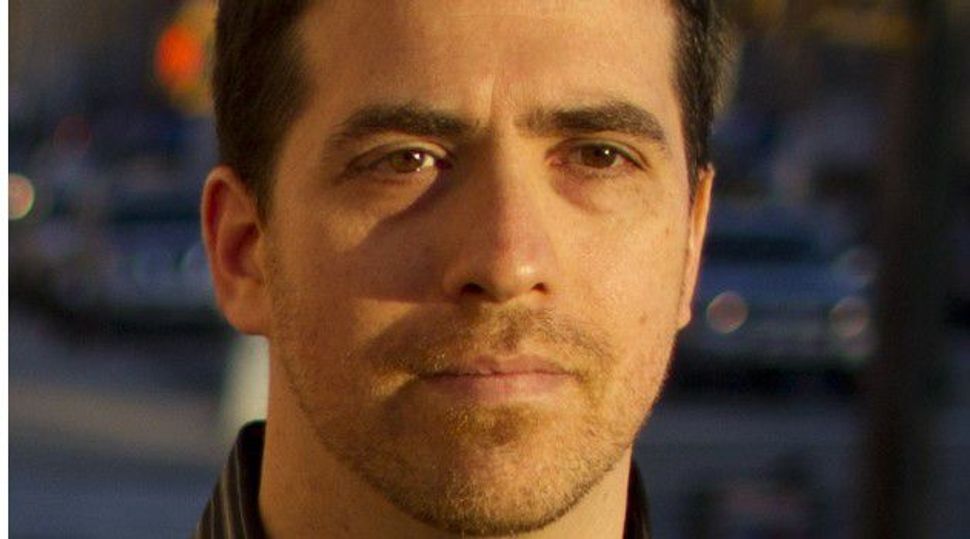 (JTA) — Shulem Deen, the former Skverer Hasid who for years blogged under the pseudonym “Hasidic Rebel,” has just published a memoir, “All Who Go Do Not Return” (Graywolf Press). Deen, now 40, describes his sheltered life in New Square, the virtually all-Hasidic village an hour north of New York City, and tells how he lost his faith and, ultimately, his five children. Deen, whose slight Yiddish accent shows his roots, recently sat down with JTA (the interview has been condensed and edited).

Julie Weiner: Most memoirs of leaving Orthodoxy include an anecdote about the first time the author ate non-kosher food or violated some other fundamental rule, but yours doesn’t. Do you remember those experiences?

Deen: I remember my first treif, but it was unimportant – a chicken quesadilla at a Mexican restaurant. But who cares? I was totally a nonbeliever by then, but there was nowhere to buy treif in New Square, and I still looked like a Hasid. As for Shabbat, I was ready to violate it way before I did. It just didn’t feel like anything to me.

So you didn’t half worry you’d be struck down?

That’s the term people use: “Oh, I turned on the light on Shabbat and wasn’t struck by lightning.” I get a little annoyed when people focus so much on that. I get that first steps are important to some people who felt really constrained by the rules; to some people it’s meaningful. It just wasn’t for me.

Your memoir tells how, despite an initially amicable divorce, your ex-wife successfully fought to curtail your custodial and visitation rights. Could you have done anything differently to prevent that?

When I left I knew very few people who were divorced, so it never occurred to me I needed to go to a lawyer. If I had gotten a properly executed agreement on custody, visitation and all that, it would’ve been difficult for anyone to go to court and want to change what’s been agreed upon just because my beard is no longer as long. My naivete was astonishing! Looking back, I don’t know where my mind was. But I’d been with this woman 15 years and thought I knew her. I’d gone on a journey that she watched. She didn’t come along, but she was there with me, and I thought she was somewhat empathetic to what I was going through.

You also write how your children distanced themselves from you and resisted seeing you even on the few visits the courts allowed. Have things gotten any better since you finished the memoir?

It’s only gotten worse. I was seeing my two boys for a while, but my youngest stopped coming a year ago. The two would come together, but when the oldest turned 13 he stopped, and then the youngest didn’t want to come anymore. He was 11, and he would get into the car and just burst into tears. I would spend 20, 30 minutes just trying to calm him down. After a year of doing this, I thought, do I want to do this to him? I tried to bribe him: I took him on all kinds of trips, to the aquarium and amusement parks. I bought him a digital camera, which he said he really wanted. But it wasn’t getting better. So I said I’m not going to force you. I thought all these bribes would help, but he called me up a week before the next visitation was supposed to happen and left a message saying he didn’t want to come anymore.

Are you hoping that at least one of your children chooses the same path as you?

If someone leaves, I want to be able to help provide what they need to make the transition. But do I want to encourage people to leave? No. I left knowing how to read and write English, knowing what it means to have a job in the outside world and interact with secular people, and even so, the transition was really, really tough. Do I hope my children will make this step? I hope they choose what feels good for them, and that one of their choices is to let me be part of their lives. I don’t care whether they choose to be religious or not religious.

Is there anything besides your children that you miss about the Hasidic community?

I miss the holidays — the first two years after I left, on holidays I’d be completely torn up. Holidays in the Hasidish world, families in the Hasidish world, celebrating happy things — those are beautiful times. I have no animosity towards the Hasidic community as a collective. I have tremendous affection and sympathy for what they’re trying to do. They’re trying to preserve a cherished worldview within a world that is very hostile to it. I disagree with the degree to which choice is taken away from individuals in the service of that, but I understand it.

I know you’re on the board of Footsteps, a nonprofit that helps people leaving the haredi Orthodox community to make the transition to the secular world. Is there an increase in the number of people choosing to leave?

Footsteps represents anywhere from 10-25 percent of the people who leave, and the number of new people who come each year is rising steadily. The fact that many of us are writing and publishing, this gives those who leave somewhat more prominence, and people within the Hasidic community are not oblivious to this, especially people who are thinking of leaving. We have people in medical school, getting master’s degrees, a nice number of lawyers. It’s becoming a community that has people doing things in the world, and that serve as something of an example that defies the old stereotype of the OTD [an acronym for a term that means “off the path”] person who’s lost, dysfunctional, has no home, no friends, gets involved in drugs and takes up with a bad crowd.