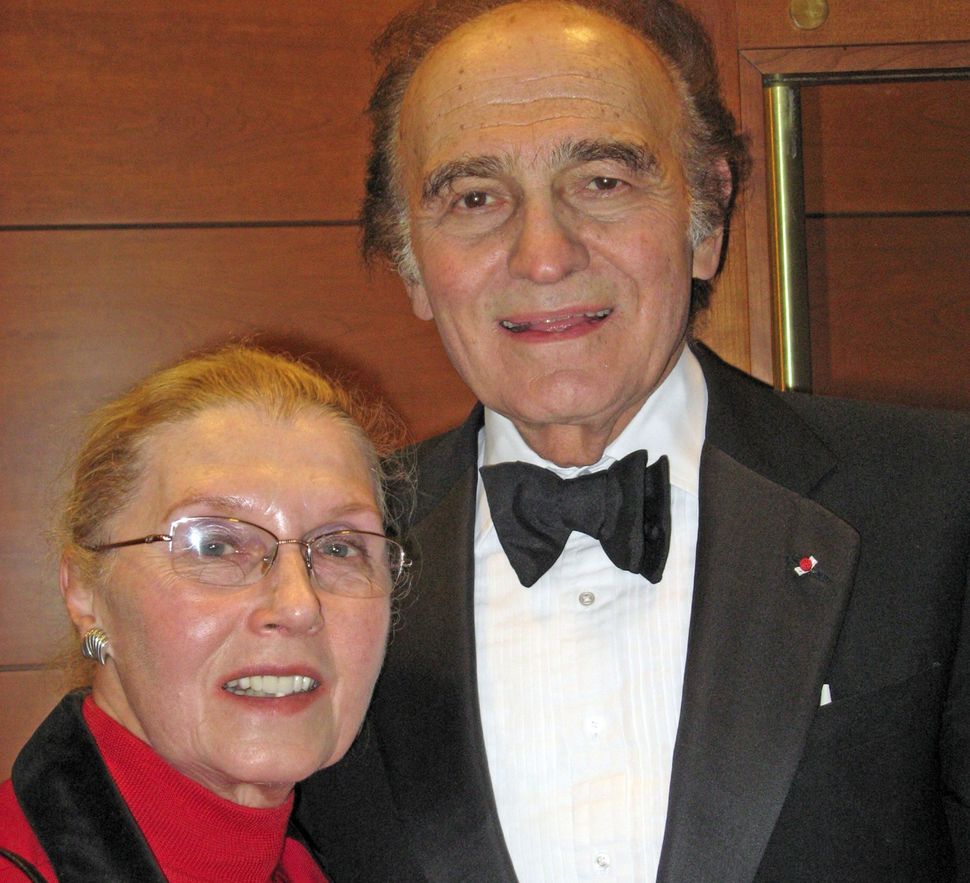 I first met Samuel Pisar, Holocaust survivor, lawyer, and presidential advisor who died on July 27 at 86, at the December 4, 1988 Israel Bonds International Elie Wiesel Holocaust Remembrance Award Dinner at the New York Hilton at which he was the honoree. Applauded by 1,100 guests, Pisar — with wife Judith Pisar at his side — accepted the award from Elie Wiesel.

When I later visited Pisar at his Regency Hotel suite for an interview, his first question was: “Did you read my book?” [“Of Blood and Hope”]. I had. Constantly interrupted by calls from London and Paris — he touted his degrees from Harvard, the Sorbonne; being made a U.S. citizen in 1961 “by a special vote of Congress,” a member of John F. Kennedy ‘s Task Force on Foreign Economics, etc., etc. Flipping through his book, he pointed to photos of himself with Kennedy, Princess Grace of Monaco, Moshe Dayan, Sheik Zaki Yamani (a Harvard classmate], France’s president Francois Mitterrand… Front and center on his desk were matchbooks embossed with Ronald W. Reagan’s initials.

“It’s not easy for me operating as a survivor and [being] this sophisticated world-renowned personage” Pisar told me. In a conversation that see-sawed between English, Yiddish, and French, I suggested: “You say you operate on a ‘double frequency’. Is there ever a moment when the Auschwitz persona and the Bialystoker yingl (lad) merge?” Survivor of several concentration camps from age 13 to 16, he replied: “I believe that two personae cohabit within me. This modern sophisticated man of affairs who speaks in an elegant way and is involved in all this meshugas. [idiocy].” I iinterrupted: “You mean wheeling and dealing?” He recoiled: ‘I am not a businessman, but a legal counsel… involved in economic as well as cultural things. Then there is the other me whom I have called sub-human — the Nuremberg terminology — who started life in Bialystok and was meant to give it up at thirteen in Auschwitz. That character watches this one. One says to the other ‘Don’t bug me, you’re living in the past speaking to me about things that don’t exist any more.”

“Faulkner said ‘The past is never past — it is always present,’” I suggested. Pisar snapped in Yiddish: “ You are expressing sentimental ideas! That is too much for me.” I switched channels: “Who are the major characters in your life?” Pisar replied: “Elie Wiesel! He tells it like a holy man—he laments. That’s his job. No one can do it better. But I can no longer lament.”

Unbuttoning his jacket to reveal the red silk lining of his navy pinstripe bespoke Savile Row suit, Pisar said: “Look at me! Here I am, this ‘untermentsch’ (subhuman) wearing this!” I took the hint: “There is no one to applaud… We survivors have been deprived of adoring admiring parents, siblings, relatives, grandparents who were taken away from us.” Pisar re-buttoned the jacket just as the phone rang. “Gorbachev is due to address the United Nations tonight… on American trade… the Palestinians, the PLO…” The conversation ended on a warm note as he escorted me to the elevator.

A later encounter was at the November 24, 2008 performance of Leonard Bernstein’s “Kaddish” Symphony No. 3 at Avery Fisher Hall, at which Pisar delivered a personal “J’accuse” that had many in the audience teary-eyed. “Mine is a layman’s Kaddish,” Pisar told the audience. “Modern, universal and dedicated to Your [God’s] tormented children: Jews, Christians, Muslims and others — believers and nonbelievers, yearning for peace, freedom and justice in our chaotic, fratricidal, suicidal world. I weep for them all… I am haunted by guilt for having survived when so many of mine were murdered. Now I must atone [with] the ritual mourner’s Kaddish I could never recite, because I had no dates of their demise.” Intertwoven with Bernstein’s music came the combined chorus’ gut-wenching “Yit’gadal v’y it kaddash sh’mei raba…”

At last, Pisar is at peace.