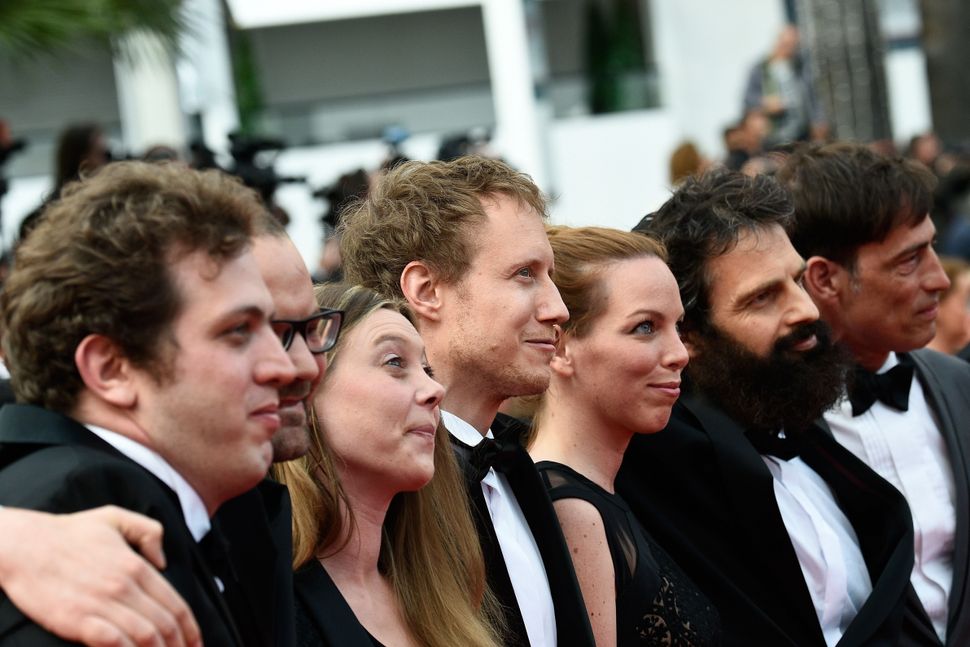 The ‘Son of Saul’ cast at Cannes. Image by Getty Images

A searing Holocaust film, “Son of Saul,” is one of five foreign-language movies nominated for a Golden Globe trophy.

The Hungarian movie, whoich won the Grand Prix at the Cannes Film Festival, is also an early favorite in the foreign-language Oscar race, which includes entries from 81 countries.

In “Son of Saul,” the character of Saul Auslander is a member of the Sonderkommando at Auschwitz-Birkenau, forced to cremate the bodies of fellow prisoners gassed by the SS. In one corpse, Saul believes he recognizes his dead son.

As the Sonderkommando men plan a rebellion, Saul vows that he will save the child’s corpse from the flames and find a rabbi to say Kaddish at a proper funeral.

Saul is portrayed by Geza Rohrig, born in Budapest and founder of an underground punk band during Communist rule. Moving to New York, he studied at a Chassidic yeshiva and graduated from the Jewish Theological Seminary.

Another entry bearing on the Holocaust, the German film “Labyrinth of Lies,” failed to make the cut. Set in the post-war 1950s, when most Germans preferred to deny or ignore the Holocaust, “Labyrinth” focuses on a young German prosecutor determined to bring the Nazis who ran Auschwitz to trial before a German court.

The final winners will be presented at the usually wild and unpredictable Golden Globe ceremony on Jan. 16.

Winners and nominees, picked by a small group made up of members of the Hollywood Foreign Press Association, gain publicity but none of the prestige reserved for Academy Award winners.