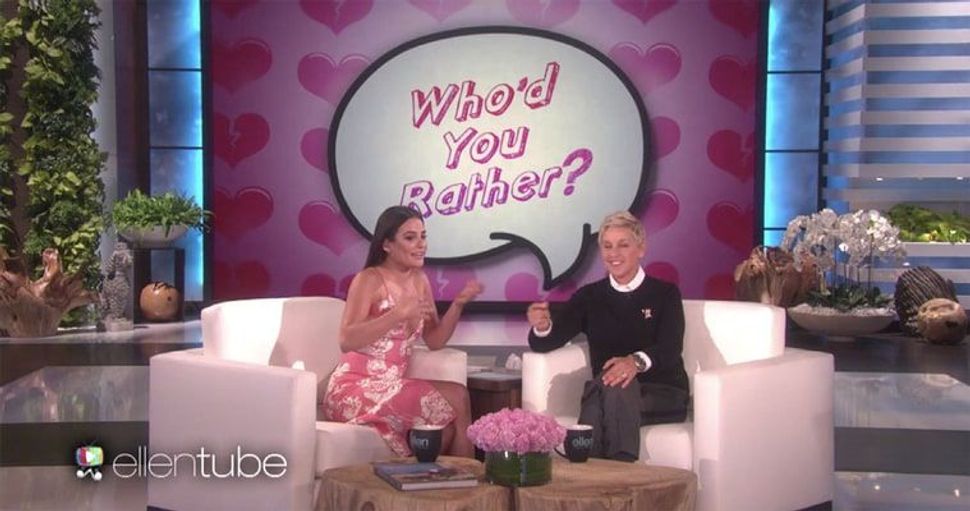 Lea Michele is single and ready to mingle with some of Hollywood’s most smoking celebrities.

At least, that’s what Ellen Degeneres is hoping.

The talk show host put the freshly-unattached Michele on the hot seat with a round of “Who’d You Rather,” pitting two male celebrities against each other for the singer’s affections.

Michele knocked John Stamos out of the running right off the bat, when posted up alongside Taylor Lautner.

“I love them both and they’re so handsome. Stamos is maybe a little on the older side,” she said. “I’m going to go with Taylor. He gave me a lap dance the other day and it was great.”

When faced with the ultimate show-down of Harry’s, One Direction’s Harry Styles and Prince Harry, Michele had to go royal—explaining she couldn’t compete with Styles’ rumored love interest Kendall Jenner.

And then Michael B. Jordan came into the running, and knocked pretty much everybody out of the ballpark, including Bruno Mars and Tom Hiddleston.

Then Calvin Harris popped up (are we seeing a pattern of Taylor Swift’s ex’s?), and Jordan lost his footing.

Harris beat out Leonardo Dicaprio and Jared Leto—and then met his demise when Zac Efron popped up on the screen.