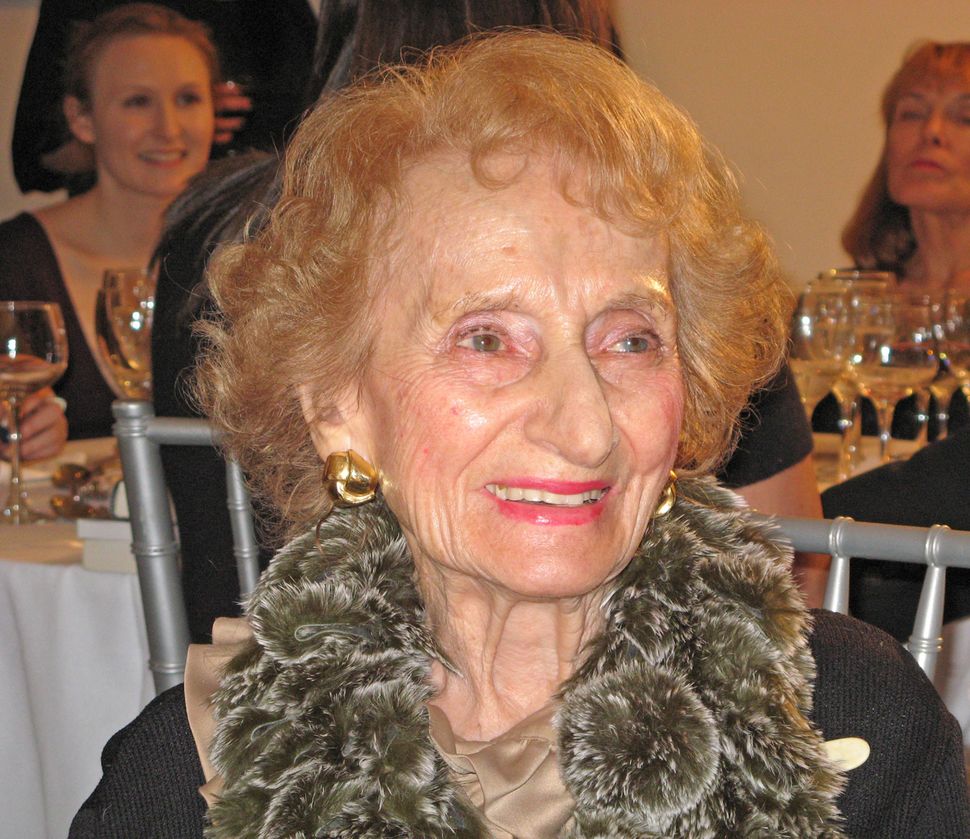 Ruth Gruber—fearless documentarian, photojournalist and memoirist who died on November 17th in New York at the age of 105 was a once-in-a- century phenomenon—fearless and best known for chronicling the saga of the ship “Exodus” in 1947— the basis for Leon Uris’s book Exodus” and epic film.

Among my special Ruth Gruber memories: ‘Jewskimos’—the February 3, 2009 celebration at New York’s Alaska House honoring Gruber at which Alaska State Representative John Harris presented Ruth with the State’s Legislature’s Proclamation honoring her for “service and contribution to Alaska”. Attendees included Alaska-based Lubavitcher rabbi Joseph Yossi Greenberg, Jack Johnson, an American sailor who’d been aboard the “Exodus”, retired Anchorage furrier Perry Green [“the most successful Alaskan in history at the annual World Series of Poker”] and Patti Kenner Gruber’s devoted friend and the executive producer and driving force behind the amazing documentary “Ahead of Time: The Extraordinary Journey of Ruth Gruber.”

Gruber reminisced how in 1941, Harold Ickes—then secretary of the Interior to Franklin Delano Roosevelt—asked her to be “a personal representative to the Territory of Alaska on a government fact-finding mission.” In other words, be a spy! During the Japanese attack on Pearl Harbor her 100 notebooks full of reports were forwarded to FDR and played a major role in shaping American policies in Alaska and the frontline battlefield of the Aleutian Islands. “What I learned in Alaska,” said Gruber, “was to live inside time—to stop being restless, to stop fighting time.” That experience was the basis for her [2003] 16th book “Inside of Time: My Journey From Alaska to Israel” (Carroll & Graff).

At the October 21, 2008 National Coalition Against Censorship’s “Free Speech Matters” dinner held at the Rubin Museum of Art, a feisty 97-year old Gruber was still smarting as she recalled how William Shawn, then editor of The New Yorker had sent her eyewitness story about the ship “Exodus” to the printers [“to be run in a single issue”] when magazine owner Raoul Fleisher in a “stop-the-presses!” moment, ordered: ”We can’t print that story in The New Yorker—It’s too Jewish!” Gruber’s article was later published in three issues of The New Republic. Gruber’s book: “Destination 1948” describing that saga was not published in Britain until December — “with apologies” underscored Gruber.

On December 19, 2005 Paul LeClerc then president and CEO of The New York Public Library hosted a reception in honor of Ruth Gruber on the occasion of her donation to the library of three letters she had received from Virginia Woolf in 1935-36 following the publication of Gruber’s 1932 doctoral dissertation on Wolf. There were headlines designating Gruber [at 20!] as “the youngest Ph.D. in the world!” The book/thesis —which Gruber wrote in 1931-32 as a student at Cologne University [had in 2005] been reissued as “Virginia Woolf: The Will To Create as a Woman” (Carroll & Graf). Gruber called me all excited that she had received a handwritten fan letter from Cynthia Ozick! She read to me: “Dear and esteemed Ruth! Intrepid and sextraordinary Ruth! Of all our life’s amazements, who would have predicted…your writing a feminist study of Virginia Woolf decades before this became de rigeur among academics…The new book knocked me out…To have been in Germany then!”

In August 2004 Ruth called me after her return from the August 4-6 weekend 60th reunion of the “Oswego N.Y. Refugees”—at which there were only 38 of the nearly 1000 refugees she had been dispatched to shepherd in August 4, 1944 from the Bay of Naples to NY, by Harold Ickes under orders from president FDR. I told Ruth that my husband Joseph’s uncle Harry Lasky—who then owned the Netherlands Dairy Warehouse in Oswego—provided extra food for the refugees. And among the 1000 rescued refugees is Doris Schechter —owner of My Most Favorite Dessert Restaurant —who was always at Gruber’s side at many of the events she attended.