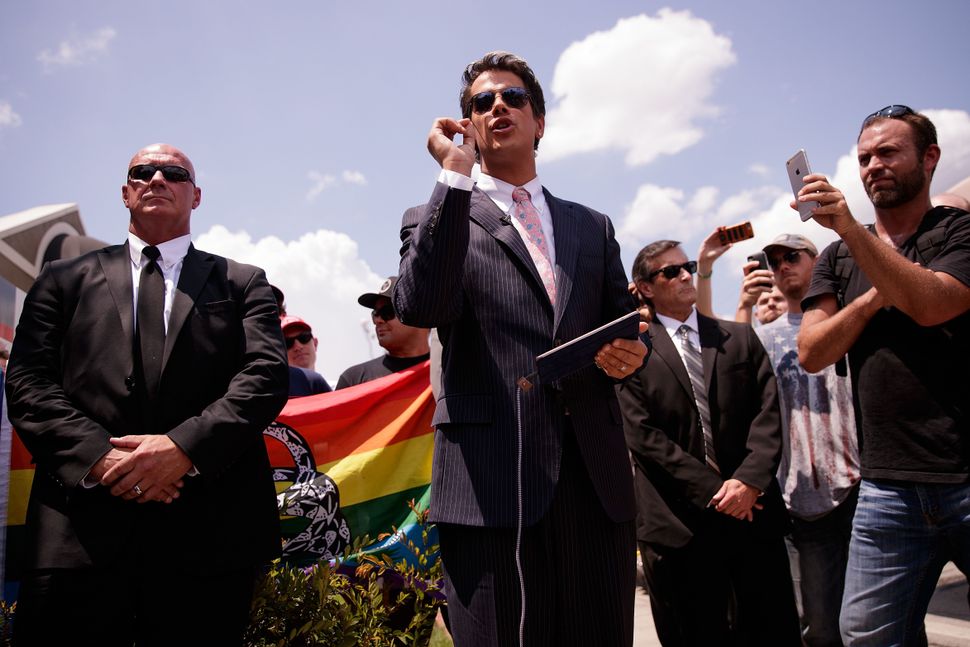 Milo Yiannopoulos, an editor at the right-wing website Breitbart News and the leader of this summer’s vicious trolling crusade against African-American actress Leslie Jones, recently inked a book deal with Simon & Schuster.

The publishing house is giving Yiannopoulos a $250,000 advance for the book, titled “Dangerous,” which is being pitched as a look at free speech by “the outspoken and controversial gay British writer and editor…who describes himself as ‘the most fabulous supervillain on the internet.’”

It should be noted that this isn’t Yiannopoulos’s first foray into the world of literature. Almost a decade ago, Yiannopoulos self-published a book of satirical poetry called “Eskimo Papoose,” which plagiarized Tori Amos, “Buffy the Vampire Slayer” and included lines about Jews.

Last year, former NFL player Chris Kluwe tracked down a copy of Yiannopoulos’ work, published under the name Milo Andreas Wagner, and live-tweeted his reading journey. (Kluwe is an opponent of Gamergate, a movement supported by Yiannopoulos, that maintained feminists were ruining the culture of gaming.)

Here, Yiannopoulos, who has Jewish ancestry, begins one of his poems with “I am not an anti-Semite.”

Oh wait, no, it all migrated to the next page. Is ink migratory? (This one’s classy, btw) #papoose pic.twitter.com/u44vswYmHx

In this one he requests: “don’t Jew me down.”

Huh. This must have been what Twilight read like in the alternate world where the Nazis won. #papoose pic.twitter.com/0Xs4Nb7SoN

And here’s a few passages where he muses about sex, suffering and violence.

I think this might have been the author’s “Stuck In Padded Room” phase. #papoose pic.twitter.com/pTmd3eClmE

“What if, like, no, hear me out here, we were all… WORDS! Think about it, maaaaaaan. Wooooooords.” #papoose pic.twitter.com/9DMxfCFyAr

When contacted by Buzzfeed News about “Eskimo Papoose,” Yiannopoulos insisted that the poems were written completely in jest, and created with the intention of “mock[ing] overwrought lefties.” Problem was, he explained, no one on the left understood that it was a joke.

“You’re going to have to try harder if you want to take down Milo Yiannopoulos,” he wrote. 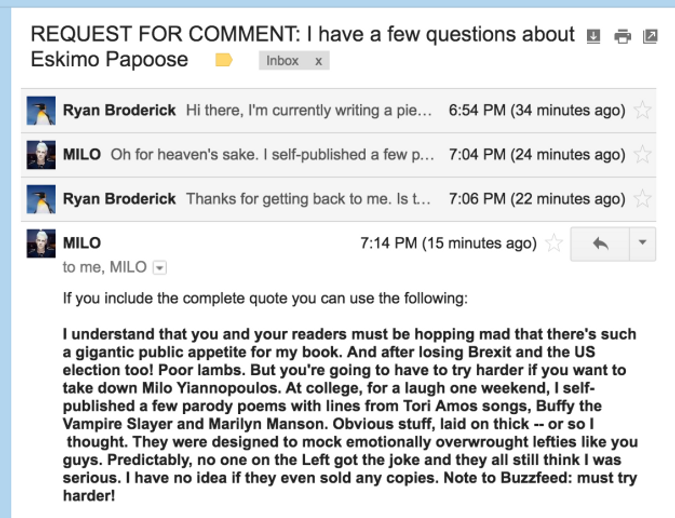 Leftie jokes aside, Yiannopoulos appears to genuinely have a thing for Buffy, the vampire stabbing teen sensation he plagiarized.

The writer had a hand in editing a book called “You’re Just a Mortal; You Couldn’t Understand My Pain: Representations of Psychopathology in Season Five of “Buffy the Vampire Slayer.”