Israelis Resolve One Conflict: Rachel and Ross From ‘Friends’ Were On A Break 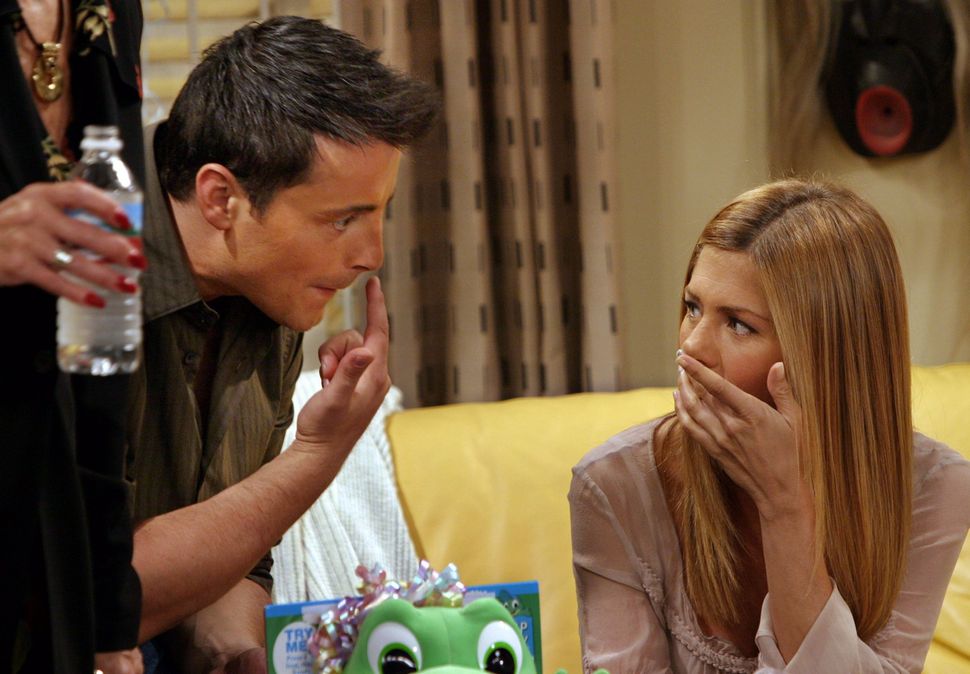 “They’re really praying with their feet!”-Joey Image by Getty Image

“One, two, three, four — they were on a break!” shouted the mass of around a hundred young Israelis.

The protesters were up in arms about a broken cease fire between warring nations: no, not Israel and Palestine but Rachel and Ross, characters on the TV show “Friends,” whose fractured relationship stems from what Rachel believes is infidelity and Ross famously claims was, “a break.”

“Friends” is an unlikely staple of Israeli culture due to relentless syndication by Israeli networks. Amir Barkol told The Jerusalem Post that the protest germinated in a thread on the popular Israeli Facebook page Am;lek (the Hebrew version of the internet phrase “too long; didn’t read/TL;DR”) and caught on through social media.

“You hear about all those important protests and it made me think — why can’t we protest less important things?” Barkol said, adding, “It was just a joke.”

Protesters took the event with the intense seriousness of, say, a protest in Rabin Square. One woman canceled her flight to Australia, citing the protest. She called it “well worth it.” On Galgalatz, the IDF radio station, a protester announced, “This is a demonstration for freedom; for the sons of Israel who left Egypt to watch “Friends” to find out that Rachel is angry with Ross because he was with somebody else while they were on a break!”

Despite an Am;lek administrator’s insistence that the protesters should go home and stop taking a joke so seriously, Barkol has no plans to stop speaking out against injustice. Considering his next steps in his assault against NBC syndication, he told the Jerusalem Post, “Hmm, Chandler was always my favorite. Maybe we should do a protest so Monica won’t be so hard on him. He’s a good man and he loves her, although he can be an idiot from time to time.”

COULD I BE MORE INSISTENT THAT ONE FEMALE PRIME MINISTER IN 69 YEARS IS NOT ENOUGH?

Israelis Resolve One Conflict: Rachel and Ross From ‘Friends’ Were On A Break