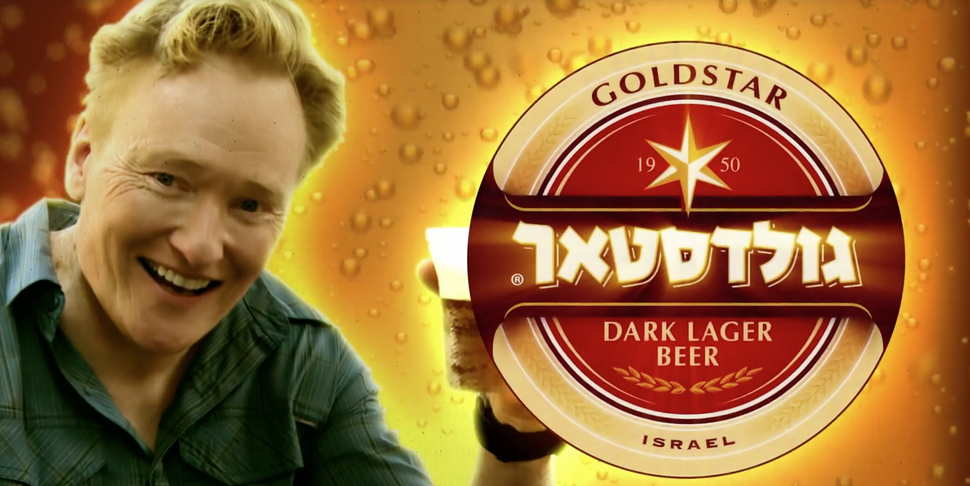 The last thing Israel needs is another over-confident white man who burns easily bopping about, trying to fix things. We don’t even know what to do with the Jared Kushner we have. Nevertheless, Conan O’Brien, entertainment’s most irrationally successful ginger, took it upon himself to visit Israel earlier this summer. The episode drops tonight during erev Rosh Hashanah, suggesting right off the bat that Conan O’Brien may not be the man to handle extremely sensitive cultural issues.

In advance of the episode, a nearly 9-minute long preview for #ConanIsrael was released today. And even to the hardened, longterm believer that Conan O’Brien typifies male mediocrity, this video is everything. Let’s dive in to the madness:

“To understand today’s Israel and the surrounding territories, you have to understand its history,” Conan begins his Israel episode. What follows is a brief history that goes from ancient Judea to modern day Israel, but sounds like it’s being recited by a Taglit tour guide who got hit in the head by falling debris at Masada. He lists the conquerors of Israel in order, minus the Assyrians, Persians, and Hasmoneans. Essentially it only takes him 30 seconds of Jewish history to destroy Chanukah. (And people claim there’s a war on Christmas!) And if Conan needs someone to explain why Cyrus the Great of Persia’s letter is vital to Jewish history I can think of 599 Rabbis off the top of my head who love to rant about it.

Reform Israelis are represented by a Dodgers hat, Druze, Bedouins, and the Ba’hai people are mentioned, and Bar Rafaeli stands alone. 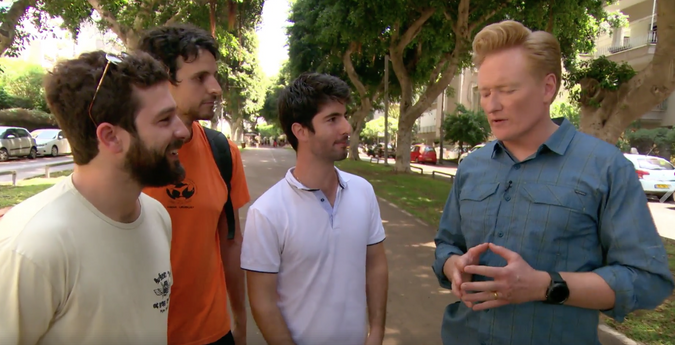 He begins on a boulevard in Tel Aviv, telling three young men, “You are Israelis.” You can tell they really are Israeli because they all have patchy facial hair and two are wearing custom-made t-shirts with crude, hand-drawn cartoons on them.

Despite prior knowledge of Bar Rafaeli, Conan suffers from the typical American response to Israeli genetics — instant sexual overstimulation followed by intense, unfocused emotions. “I’m talking to handsome Israeli man number 3,652 of the day,” he says, with the telltale mix of awe and confusion. “What is it with you people? It’s the best-looking people I’ve seen anywhere.” 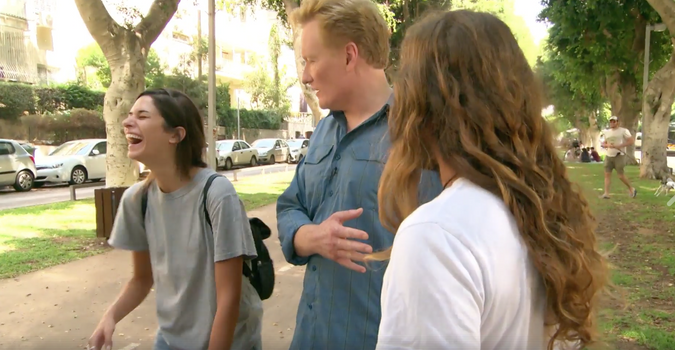 Conan Begs Random Israelis To Be Attracted To Him

BEEN THERE, BABE. Conan asks one half of a scarily good-looking Tel Aviv couple if she would be attracted to him if she saw him on the street. She laughs, confused by the question.

Conan Shoves Parve-y Looking Tin Foil Pan Of Cake In His Mouth And Shouts, “I Love This Country”

Once again, we have all been there. Conan mocks an older Israeli man’s chest hair, clearly beginning to feel better about himself. Faced with a post-IDF lifeguard named Shai in a cut-up t-shirt, Conan screams into a megaphone, “All Israeli men wearing speedos, please leave the beach.” 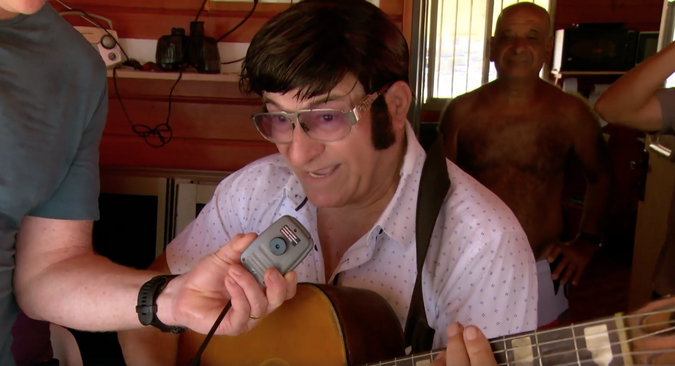 Conan gives into the charm, horror, and bizarreness of life in Israel as we all ultimately do. The episode ends with a surreal meeting of minds and vocal parts — Conan, an elderly Israeli Elvis impersonator, Baywatch-looking Israeli lifeguards, and the crowds of the Tel Aviv beach singing, “Can’t Help Falling In Love With You.”

Israel. Conan. Elvis impersonators over the age of forty. You really can’t help falling in love.