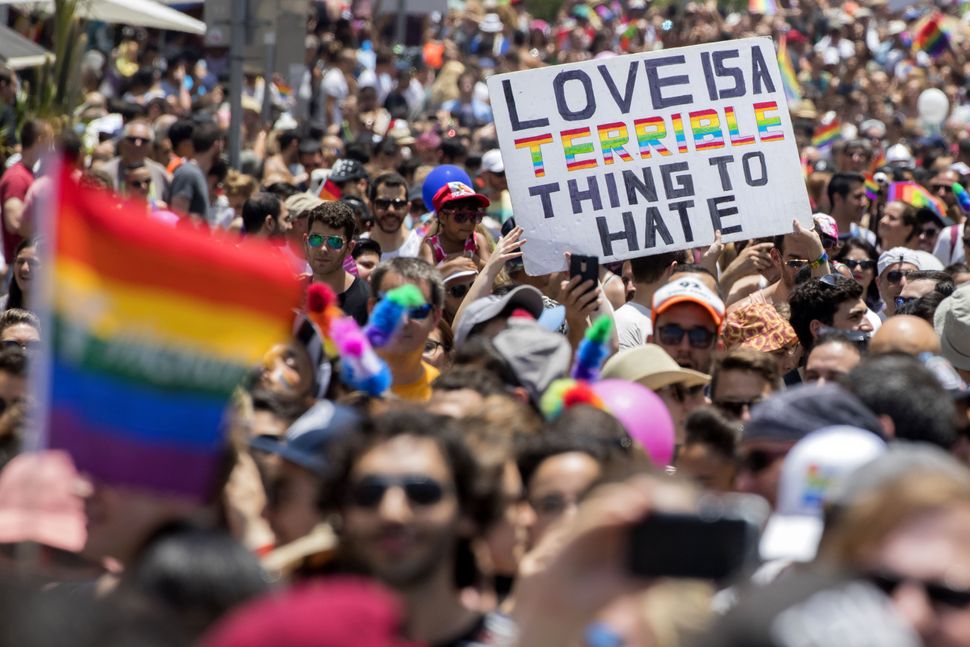 Tel Aviv is famous for its status as an LGBTQ haven — but Israel at large has a complicated relationship with the LGBTQ community. In “A Queer Country,” filmmaker Lisa Morgenthau documents a country in which its queer community is at turns celebrated, exploited, and ostracized.

Morgenthau was drawn to the subject after realizing how far most people’s understanding of Israel is from its reality.

Morgenthau takes us from the vibrant gay nightclubs of Tel Aviv to the diverse streets of Jerusalem, conducting interviews with Orthodox psychologists, LGBTQ activists, human rights advocates, and those struggling to find a religious community that will accept them the way they are. Along the way, we get to know the spectrum of social and political views across Israel and the balancing act that crafts the world’s perception of it.

Among people whom one documentary subject describes as “vehemently into maintaining their identity,” we find pride at odds with pinkwashing, the practice of using a gay friendly political image to mask or downplay what some perceive as a human rights crisis. A popular sentiment among the queer community in Israel, especially progressive Tel Aviv, is that their safety and rights are not the priority. Rather, it’s the rights of Palestinians living in occupied territories that need to be fought for imminently.

It’s these voices that Morgenthau feels are missing from what is otherwise a diverse cast of interview subjects.

“We wished we could have had Israeli Arab and Palestinian LGBTQ voices in the film,” wrote Morgenthau. “If we had more time, I hope we would have managed to find these voices because we do feel they are missing. We did speak to several Israeli Arab LGBTQ but they declined being part of the film for different reasons; they had not come out to their families and also they didn’t want to be a ‘token minority,’ which we understood.”

Perhaps the most interesting stories we hear come from those who wish to simultaneously exist in both the religious and the queer worlds. In one scene, Morgenthau interviews Sarah Weil, a staff member at Hebrew University, about the struggles of being both gay and religious. Weil emigrated to Jerusalem from the United States as an out lesbian to explore her religious identity as a Jew. She found that her sexual identity was not accepted in her newfound religious community and went back into the closet in order to be among them.

“I used to have a rubber band on my hand and whenever I had an inappropriate thought about a woman, I would snap it and remind myself that it was no good,” said Weil in the documentary.

Hiding her identity eventually became too painful for Weil and she embarked on a three-year relationship that would end the one she had with her religious community. She’s still religious but estranged from that community.

“I still call myself Orthodox but I don’t fit into the Orthodox community,” said Weil. “It’s difficult to find a community that’s open-minded and at the same time deeply spiritual and committed to a relationship with God.”

That doesn’t mean, however, that it’s not possible for an LGBTQ person to have both a vibrant religious life and vibrant sexual and romantic one. Eli Kaplan-Wildmann is another American living in Jerusalem to whom Morgenthau spoke. He comes from a religious family and told Morgenthau that his parents weren’t all that upset when he came out as gay.

“I know I’m gay and I know I’m religious,” said Kaplan-Wildmann. “What’s better? That I be gay or that I take off my kippah and move to America?”

“A Queer Country” will premiere in New York City at the Margaret Mead Film Festival at the American Museum of National History Sunday, October 22nd. You can buy tickets here.