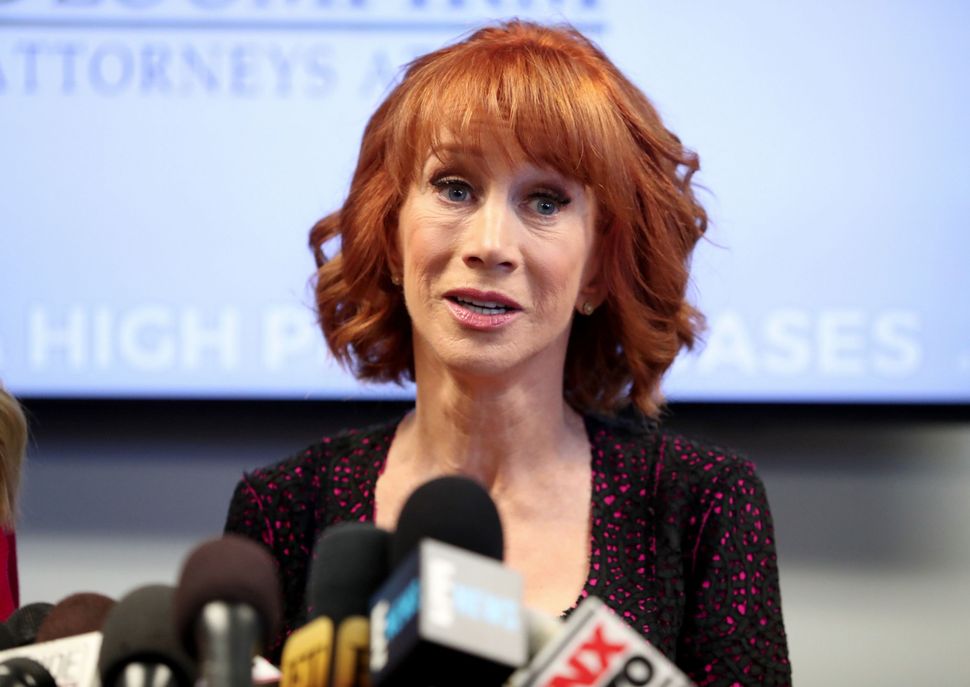 If you are a little girl harboring dreams of one day making a name for yourself in the City of Stars, let me be the first to crush your dreams — Hollywood is a festering cesspool of toxic misogyny, unfathomable greed, and a general sense of complete emptiness. Do literally anything but go there and attempt to realize your dreams of celebrity.

This is according to a lot of people, but most recently Kathy Griffin, who released a scathing video Saturday indicting celebrity tabloid blogger Harvey Levin, Bravo host Andy Cohen, her former lawyer Lisa Bloom, and pretty much anyone who she perceives to have had anything to do with her downfall.

The video was released in response to an interview Andy Cohen gave to TMZ, in which he sarcastically claims not to know who Kathy Griffin is. In the interview, Cohen is simultaneously over-jovial and antagonistic, like a male version of Brittany Murphy’s character in “Girl, Interrupted.” The interviewer seems to be in on the performance, gleefully acting as if Andy Cohen genuinely does not know who Kathy Griffin is, despite having worked with her for many years. The two of them play off of one another, creating a true improv comedy show from hell.

Griffin’s response is 17 minutes long and her use of that time is scarily efficient. She systematically names and shames her enemies, detailing their betrayals and imploring watchers to share the video around the Internet before Twitter deletes it. It is clear that Griffin’s decades-long career as a standup comedian has prepared her for the moment when she would need to verbally skewer those who have made her life unbearable.

Below are some personal favorite moments from 17 minutes of searing drama:

You know a celebrity revenge video is going to be good when, less than three minutes into it, one of the targets’ phone numbers is shared with the world. Griffin opens the video with a short voicemail from Harvey Levin, in which he leaves her his phone number and asks her to give him a call. Doxxing is bad, of course, but it’s also a solid way to open what is almost definitely going to go down in history as the shadiest celebrity revenge video ever recorded.

Lisa Bloom made her bed when she (briefly) represented Harvey Weinstein, and her former client, Kathy Griffin, is among those singing her a special lullaby called “Your Career Is Over, You Lying Traitor.” Griffin repeatedly references Harvey Levin’s supposedly enduring friendship with Lisa Bloom, saying that he is “in bed with the Lisa Bloom’s of the world” and sarcastically referring to his “good friend Lisa Bloom.” It seems that just yesterday Lisa Bloom was defending Kathy Griffin in the wake of the fallout from her headless Donald Trump video. Alas, nothing good and pure lasts forever.

3.Griffin accuses Andy Cohen of inviting her to do cocaine twice.

None of the accusations made in this video are particularly shocking — of course Andy Cohen is a misogynist, of course Lisa Bloom is a traitor, of course Harvey Levin lives to take people out – but no accusation is less shocking than the one that supposes Andy Cohen once offered Kathy Griffin blow.

Become a nurse or teacher or a garbage person. Make a home for yourself in the Midwest or the Arctic Circle. But for God’s sake, don’t go to Hollywood.